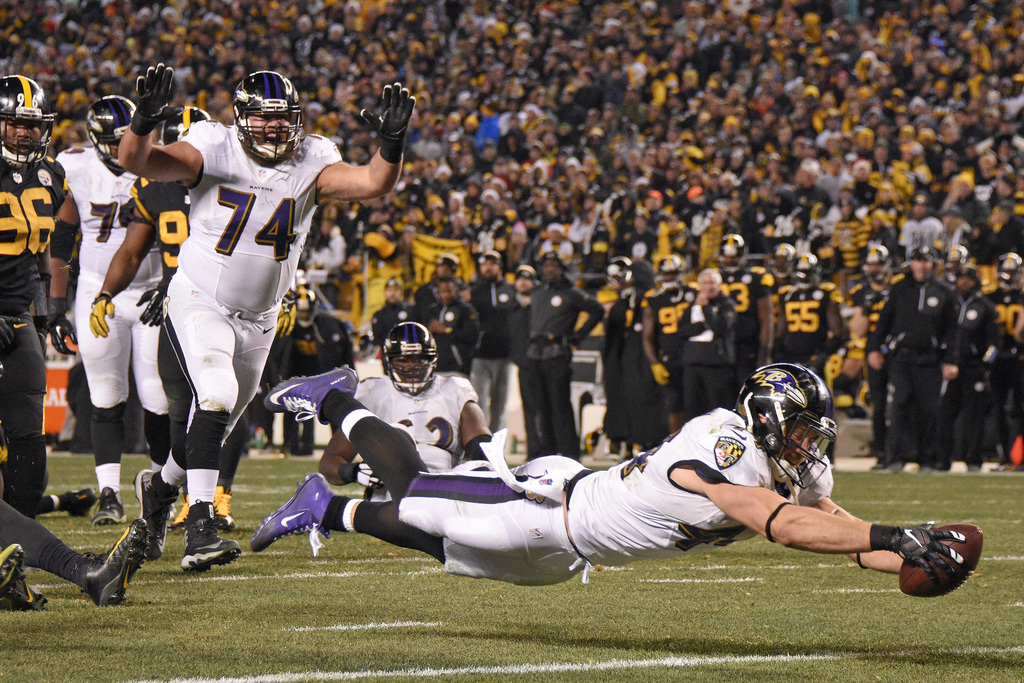 PITTSBURGH (AP) — Ben Roethlisberger shook off a pair of interceptions to throw two late touchdowns, including a 4-yard strike to Antonio Brown with 9 seconds remaining to lift Pittsburgh to a 31-27 victory over the Baltimore Ravens on Sunday night. Brown caught Roethlisberger's pass just short of the goal line and stretched the ball into the end zone with his left hand to cap a wild fourth quarter and give Pittsburgh (10-5) its second division title in three years.

The Ravens took the lead on Kyle Juszczyk's 10-yard burst up the middle with 1:18 remaining. But Roethlisberger calmly led the Steelers 75 yards in 10 plays, the last 4 coming as Brown fought through a pair of tacklers to assure the Steelers of a third straight playoff berth.

The Ravens (8-7) were officially eliminated when Joe Flacco's pass near midfield was intercepted on the final play.

Kansas City secured a playoff berth with the Baltimore loss.

The Steelers have won six straight and ended a four-game losing streak to Baltimore.

KANSAS CITY, Missouri (AP) — With their postseason spot secured, the Chiefs turned to Travis Kelce and Tyreek Hill to roll past the Broncos and keep their AFC West title hopes alive.

Kelce had 11 catches for 160 yards and a touchdown, and Hill took a handoff 70 yards for another score, as the Chiefs (11-4) beat the Broncos (8-7) for the third straight time and eliminated the Super Bowl champions from postseason contention.

Kansas City punctuated the win in style when 346-pound defensive tackle Dontari Poe, lined up at quarterback, threw a jump pass to Demetrius Harris with just under two minutes left.

A win next weekend in San Diego coupled with an Oakland loss in Denver would give the Chiefs their first division title since 2010, not to mention a first-round bye and home playoff game.

Meanwhile, the Broncos trudged through another inept offensive performance.

Trevor Siemian was 17 of 43 for 183 yards and a game-ending interception, and the only TD drive he led came after a pick gave him the ball at the Kansas City 6. Justin Forsett scored two plays later.