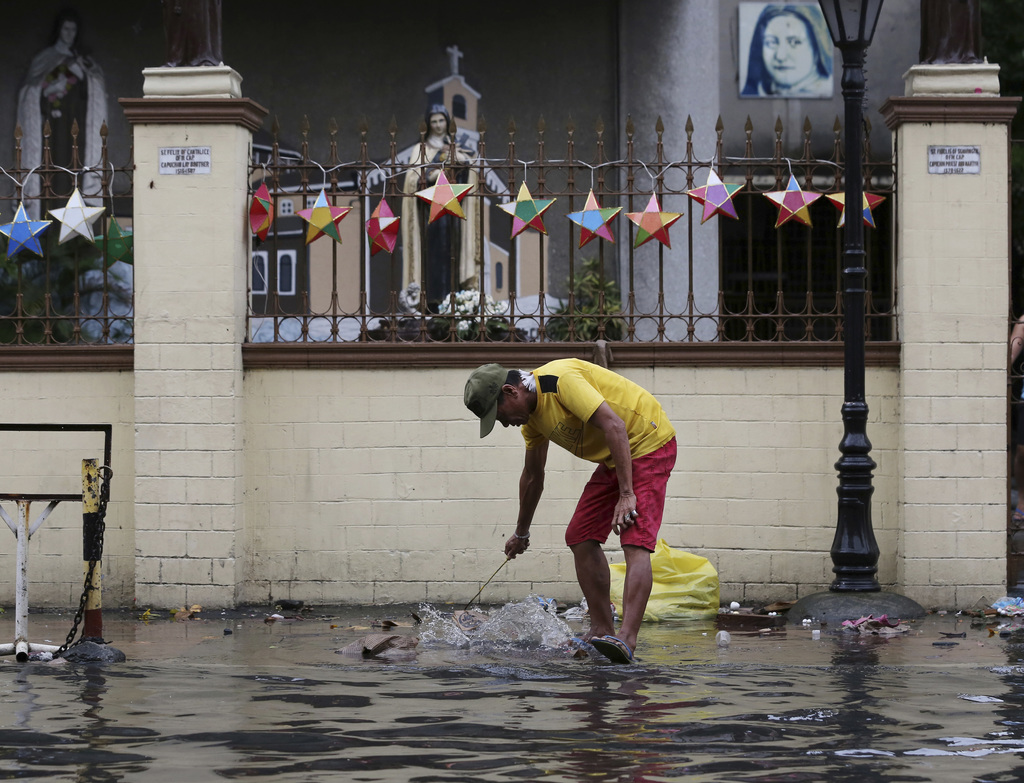 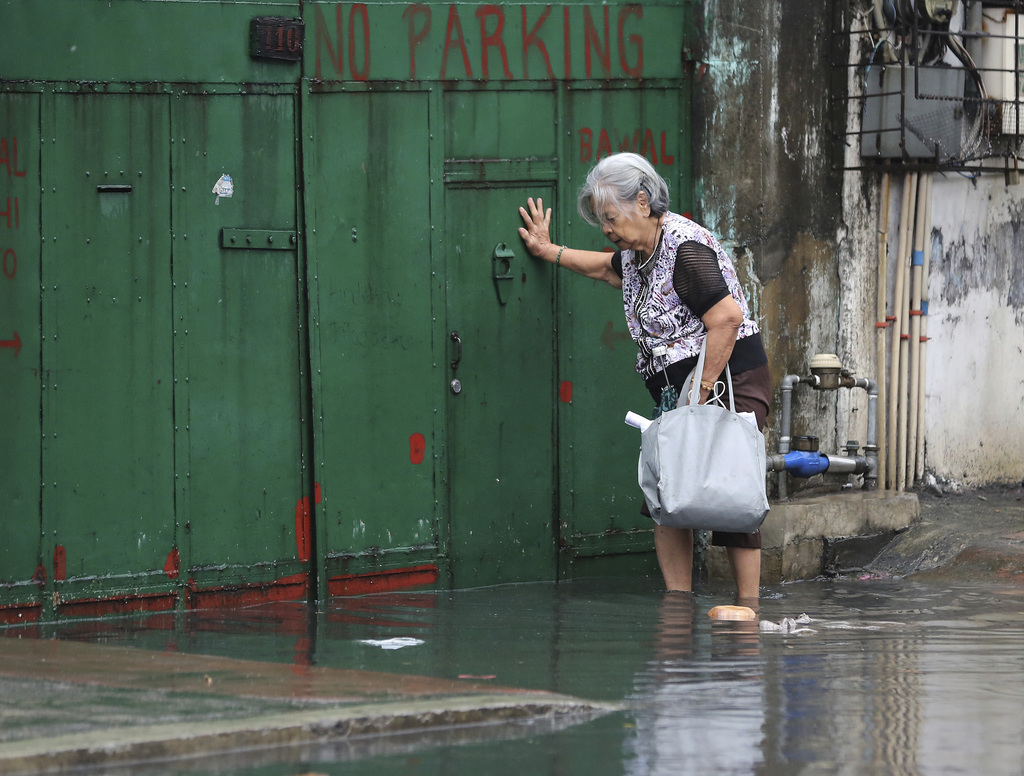 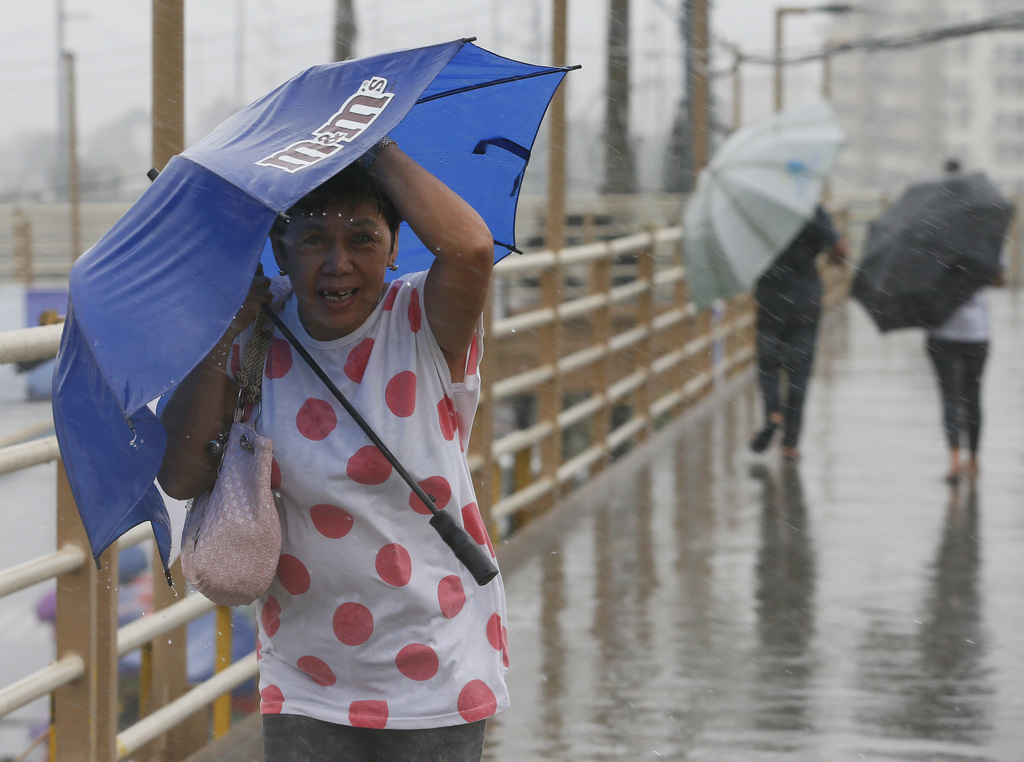 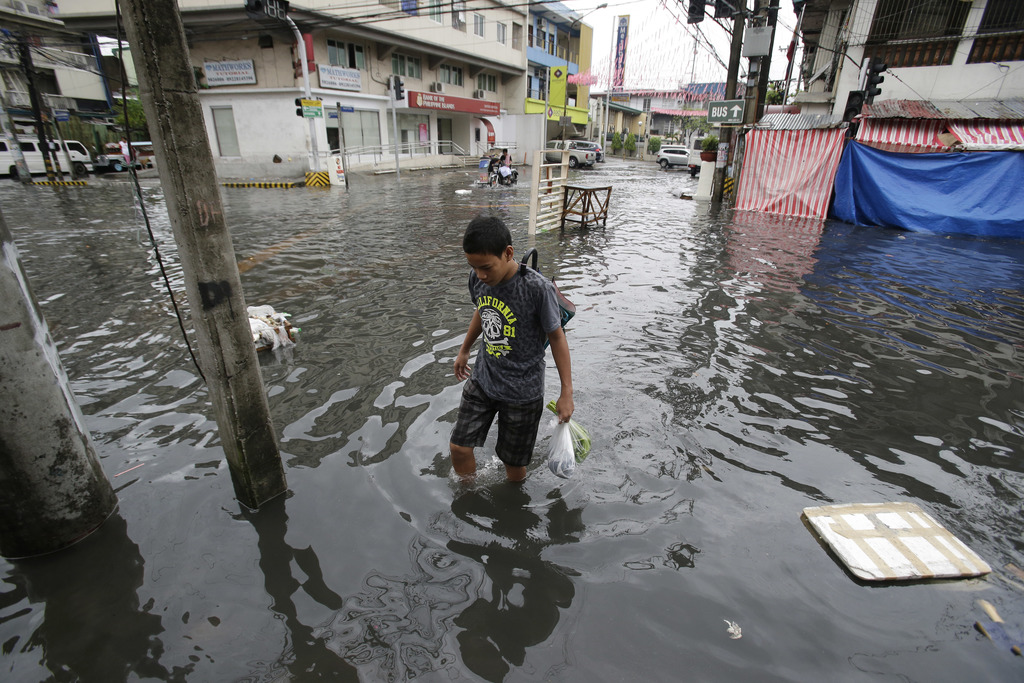 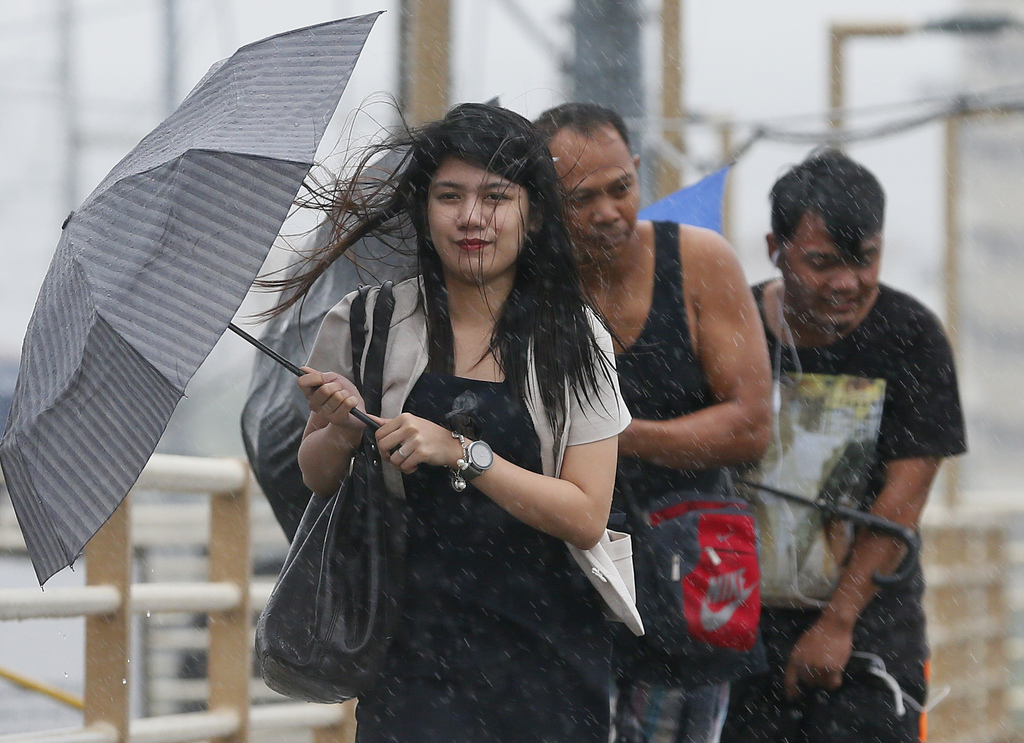 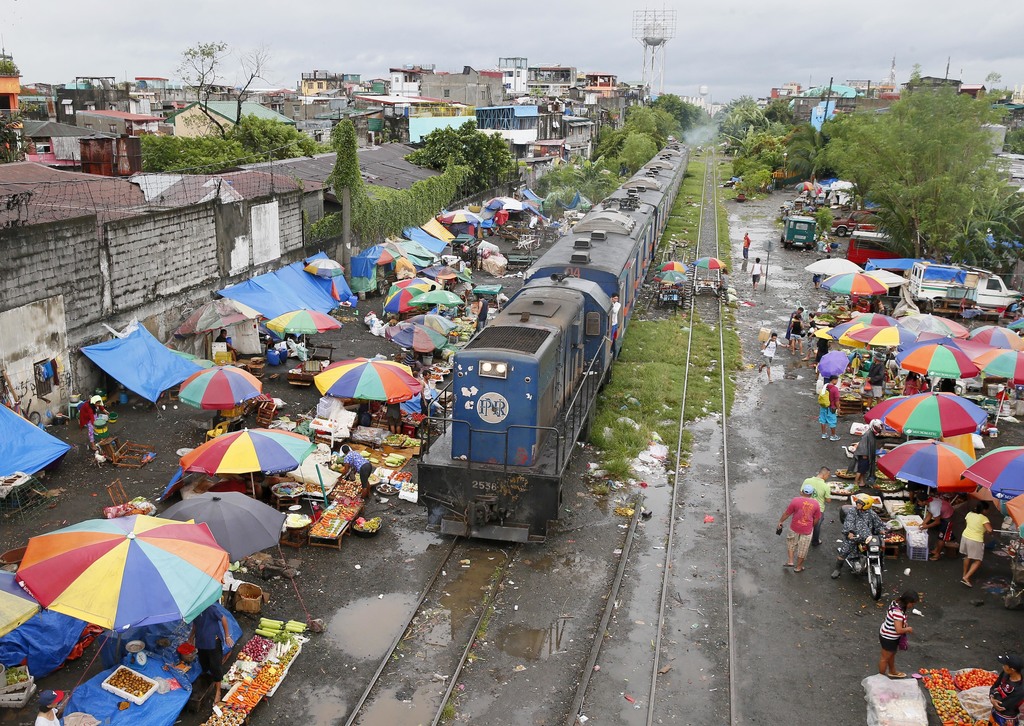 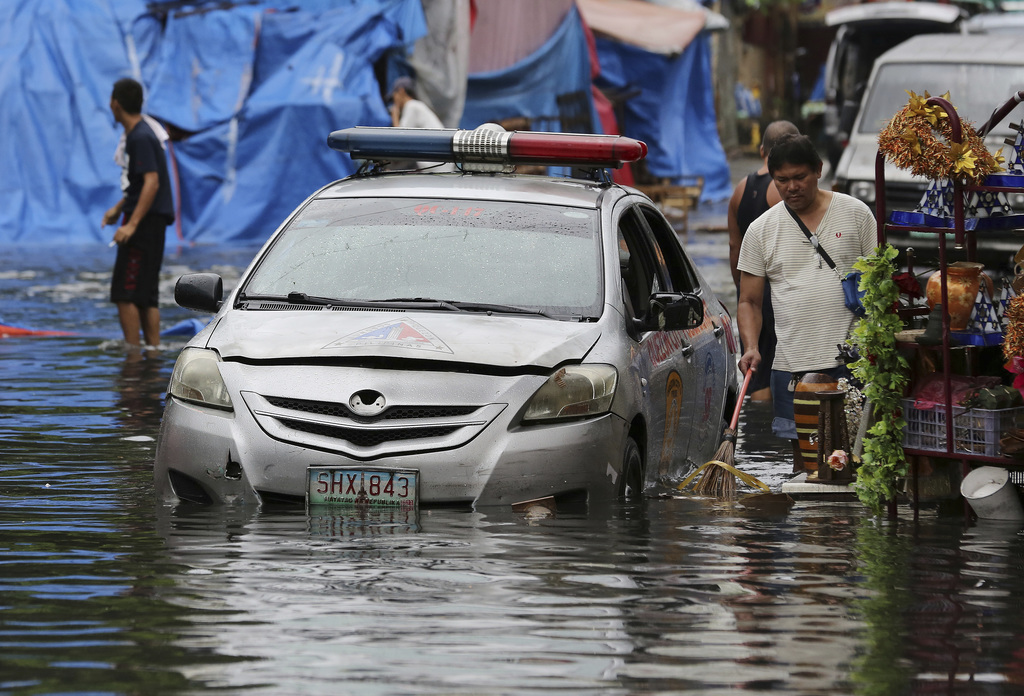 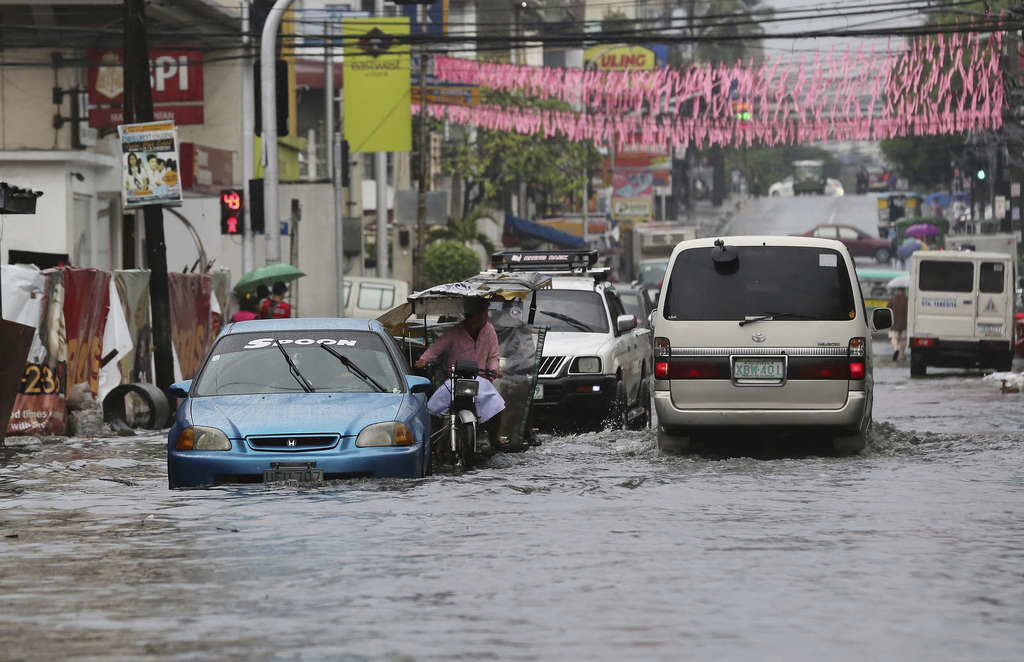 BATANGAS, Philippines (AP) — A powerful typhoon that spoiled Christmas Day in parts of the Philippines, leaving at least four people dead and destroying homes, roared over a congested region near Manila on Monday with slightly weaker but still-fierce winds, officials said.

Typhoon Nock-Ten cut power to five provinces at the height of Christmas celebrations and displaced tens of thousands of villagers and travelers in Asia's largest Catholic nation.

A farmer died after being pinned by a fallen tree in Quezon province and three other villagers, including a couple who were swept by a flash flood, died in Albay province, southeast of Manila, after the typhoon made landfall in Casiguran province Sunday night, police said.

Although it had weakened slightly, the typhoon still had sustained winds of up to 130 kilometers (80 miles) per hour and gusts of 215 kph (133 mph), government forecasters said, as it blew over the heavily populated provinces of Batangas and Cavite, south of Manila, on Monday morning. It was expected to exit over the South China Sea later in the day.

A cargo ship with an unspecified number of crewmen radioed for help as their vessel started to sink off Batangas, while another ran aground and turned on its side in a beach below a mountain in the province's Mabini town, the coast guard said. The coast guard sent vessels to rescue the crewmen of both ships.

The storm was one of the strongest to hit the Philippines since Typhoon Haiyan left more than 7,300 people dead or missing and displaced over 5 million in 2014. But officials in some provinces found it difficult to convince people to abandon their Christmas celebrations and head for the shelters before the storm hit. Some officials said they had to impose forced evacuations.

"Some residents just refused to leave their homes even when I warned them that you can face what amounts to a death penalty," Cedric Daep, a top disaster-response official in Albay, said by phone.

Shopping malls and stores were ordered to close early on Christmas Day to encourage people to remain indoors, "but at the height of the typhoon, many cars were still being driven around and people were out walking," Daep said. "We warned them enough, but we just can't control their mind."

Officials in Albay, where more than 150,000 villagers were displaced by the typhoon, declared a "state of calamity" on Sunday to allow faster disbursement of emergency funds.

About 20 typhoons and storms lash the Philippines each year. In the past 65 years, seven typhoons have struck the country on Christmas Day, according to the government's weather agency.

Tens of thousands of villagers, forced to spend Christmas in crowded and powerless emergency shelters, started to return home Monday to deal with the damage.

"They have left the evacuation centers and we're seeing the sun again," Ann Ongjoco, mayor of the town of Guinobatan in Albay, one of five provinces that lost electricity, said by phone.

But she said her town, where more than 17,600 villagers fled to shelters in schools, will not be able to resume the holiday celebrations because of the post-typhoon mess. "Many houses made of light materials were destroyed," she said.