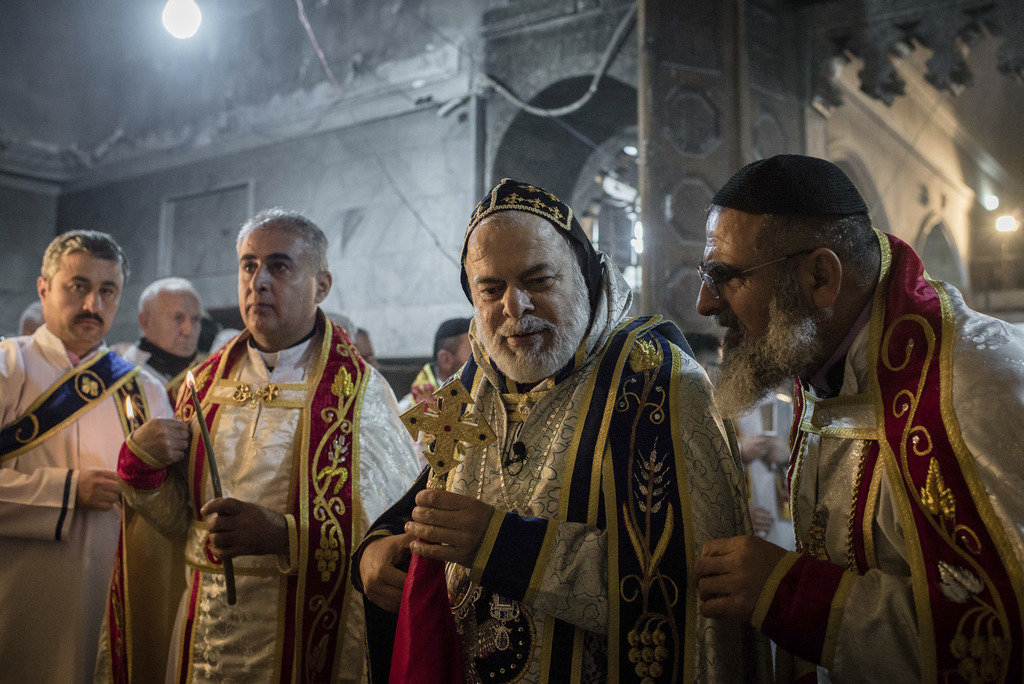 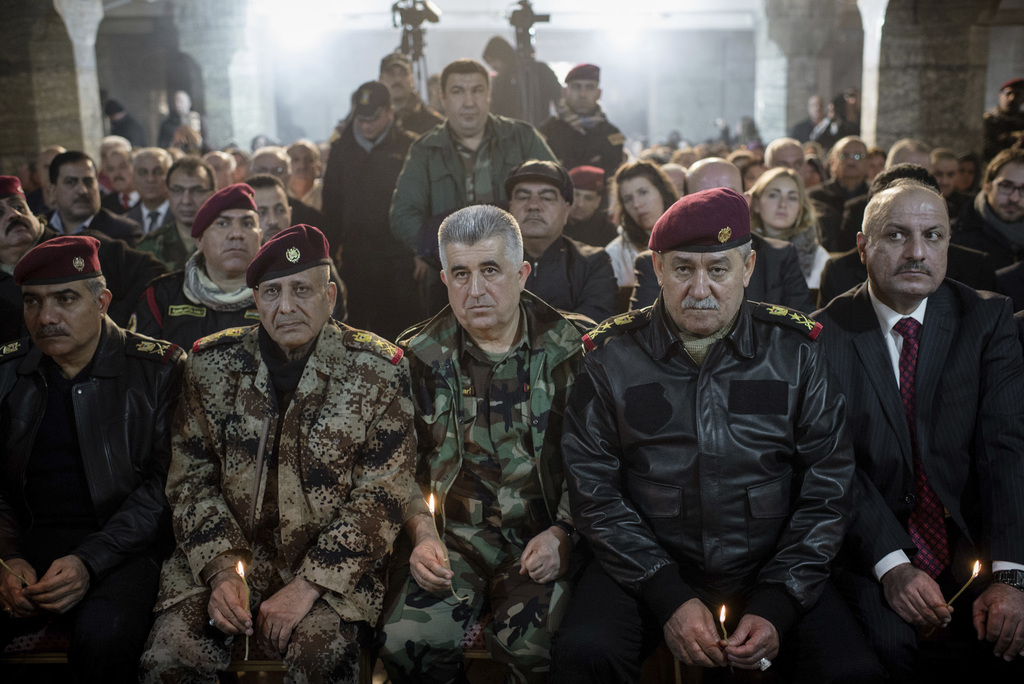 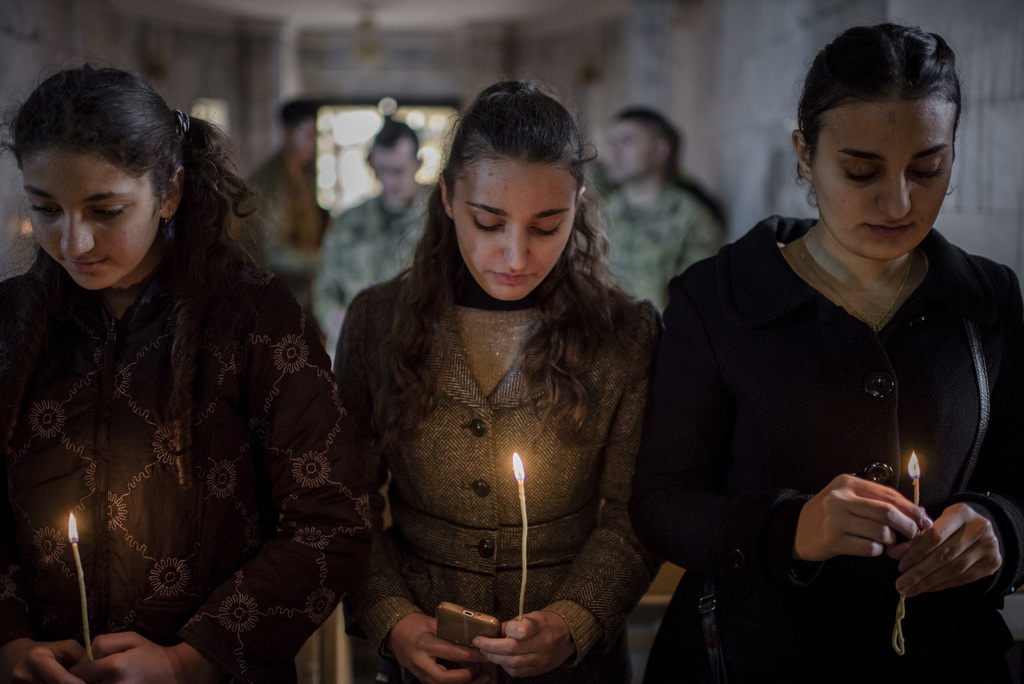 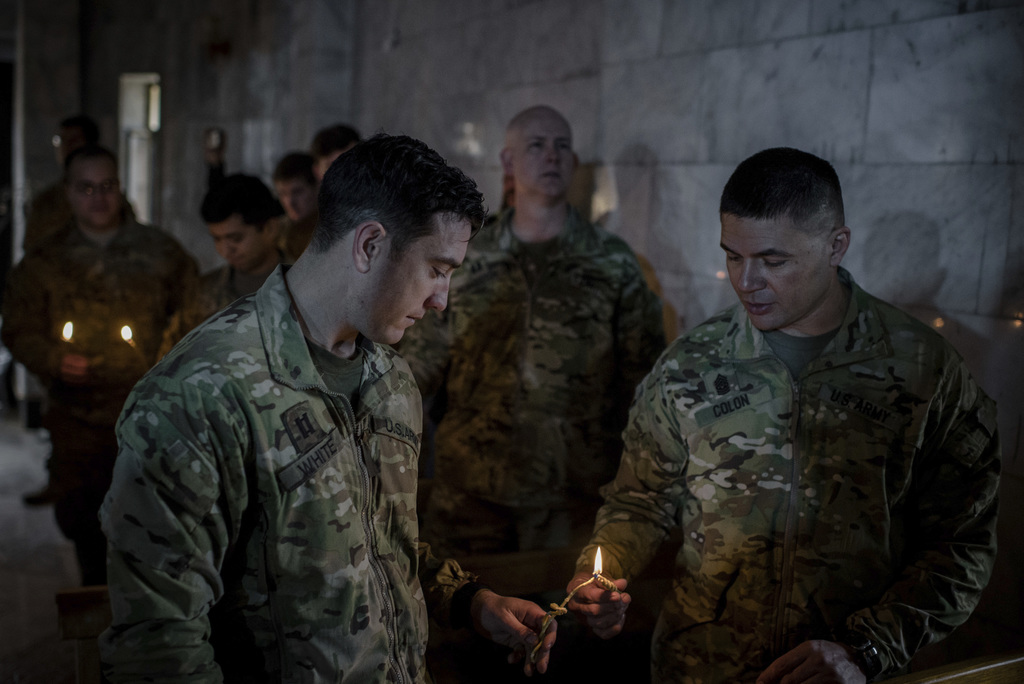 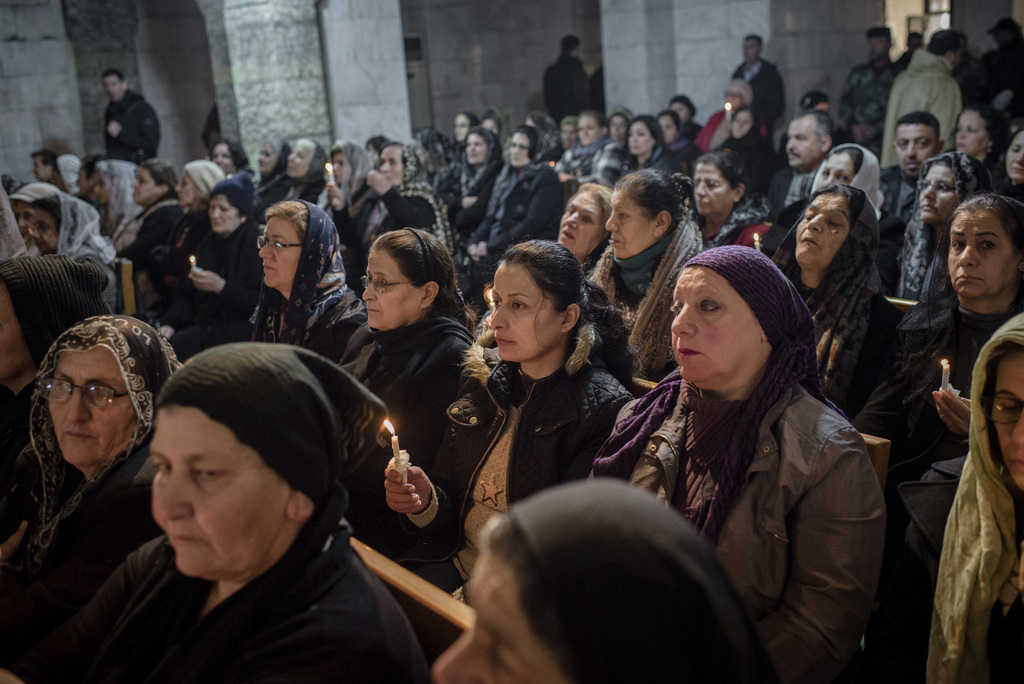 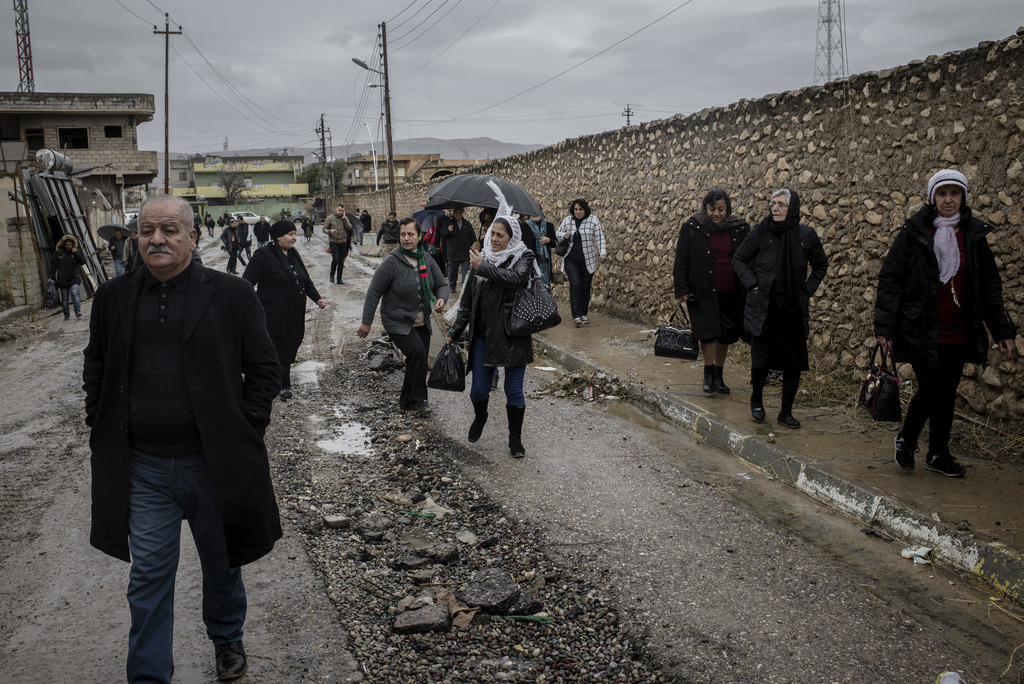 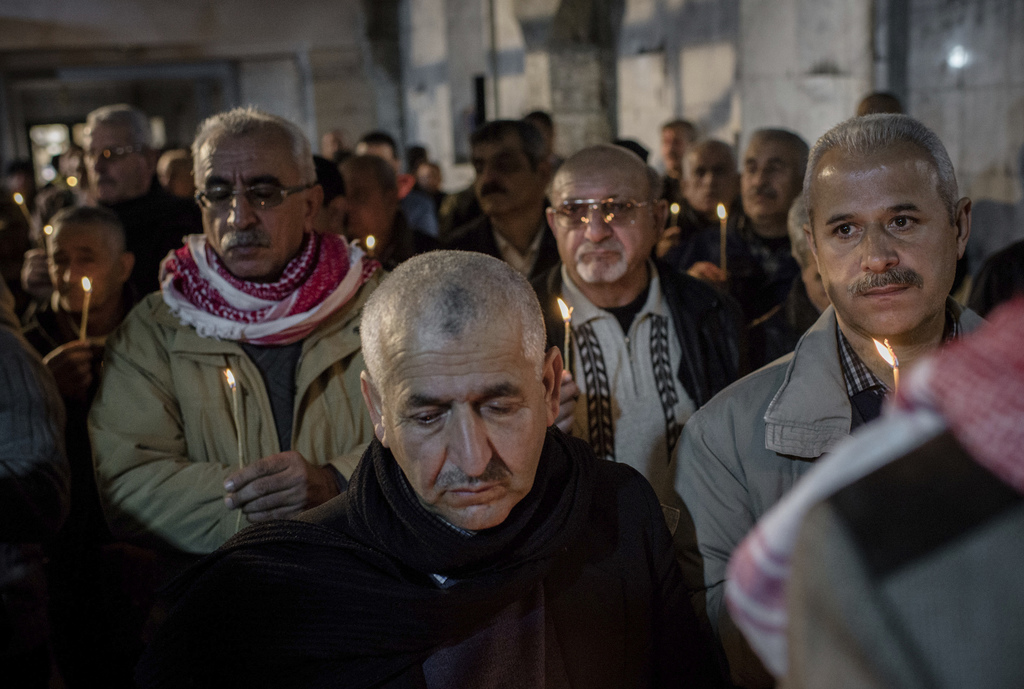 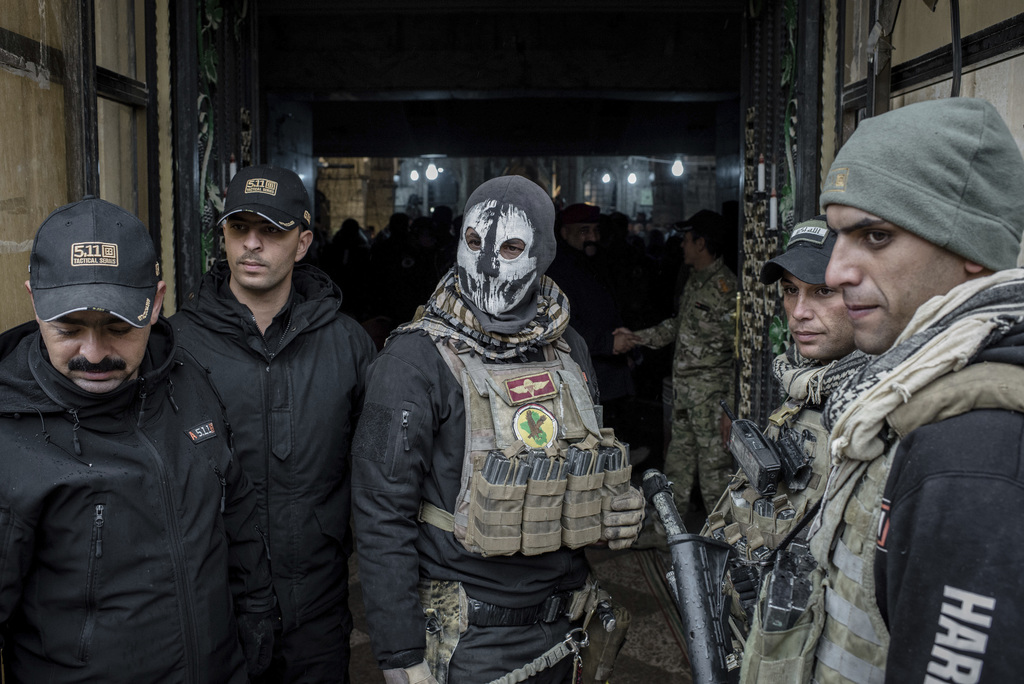 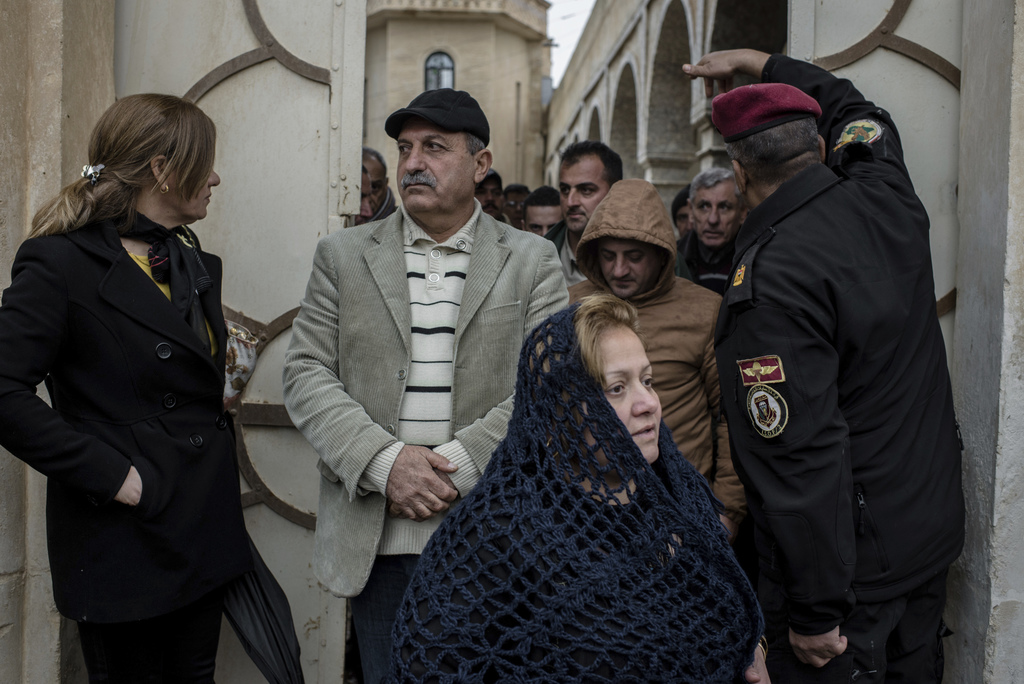 BARTELLA, Iraq (AP) — For the 300 Christians who braved rain and wind to attend Christmas's Eve Mass in their hometown, the ceremony evoked both holiday cheer and grim reminders of the war raging around their northern Iraqi town, and the distant prospect of moving back home.

Displaced when the Islamic State group seized their town, Bartella, in August 2014, the Christians were bused into town from Irbil, capital of the self-ruled Kurdish region where they have lived for more than two years, to attend the lunchtime service in the Assyrian Orthodox church of Mart Shmoni.

Torched by IS militants, church-supervised volunteers recently cleaned it up after government forces retook Bartella as part of an ongoing campaign to liberate the nearby city of Mosul and surrounding areas in Nineveh province. But the church is still missing its icons, electrical wiring hangs perilously from its ceiling and most light fixtures are gone. The headless statue of a late patriarch stands in the front yard, its pedestal surrounded by shards of glass.

On Saturday, women joyously ululated when they stepped into the marble-walled church. Almost everyone held a lit candle. Many took photos with their mobile phones. A handful of gas heaters were brought in, but they did little to warm the place on a wet and windy December day.

For many of them, the sight of their hometown in almost complete ruin was shocking. Only a few homes in the once vibrant town of some 25,000 people stand unscathed. Most have been damaged by shelling or blackened by fire.

On one street wall, IS's black banner remains visible under the white paint. Next to it, someone wrote: "Christ is the light of the world. Bartella is Christian."

"Our joy is bigger than our sadness," said university student Nevine Ibrahim, 20, who was in Bartella Saturday for the first time since she, her parents and four siblings left in 2014. They found their house badly damaged. Everything they owned was gone.

"I don't think we can return. The house can be fixed but the pain inside us cannot," she said, seated among three of her siblings. "Who will protect us?"

Halfway through the service, conducted in Assyrian and Arabic, it became something of a wartime mass. Roughly a dozen U.S. military servicemen and a 100-man contingent from the Iraqi military led by several top generals descended on the church in a show of solidarity.

Unlike their Americans counterparts, the Iraqi troops came armed. Iraqi soldiers — with one wearing a skull-face balaclava— searched people coming into the church. Inside, soldiers frisked anyone moving close to the Iraqi generals, who arrived in some two dozen armored SUVs and Humvees.

The distant thud of explosions could be heard after mass. But none of that seemed to dampen the worshippers' joyous spirit.

The soldiers photographed each other and took selfies. Many of them held lit candles, and the congregation warmly applauded when Bishop Mussa Al-Shamani thanked the Iraqi military for "liberating" Bartella.

The Christians of Nineveh are members of an ancient and once-vibrant community. They enjoyed protection under Saddam Hussein, but their numbers rapidly dwindled after the U.S.-led invasion of Iraq toppled the regime of the late dictator in 2003.

Since 2003, Sunni militants have targeted Christians and their churches, terrorizing the community and forcing many of its members to flee to the West, neighboring nations or the northern Kurdish region. IS's onslaught across northern Iraq in 2014 devastated the unique communities of Christian-majority towns like Karamlis, Bartella and Qaraqosh — all in the Nineveh plains. Of the estimated 1.5 million Christians who lived in Iraq on the eve of the U.S.-led invasion, about 500,000 are left.

"This is the mass of defiance," Assyrian priest Yacoub Saady told the congregation at the end of the service. "We, the Christians, are the oldest component of this country. We are staying put and no power can force us to leave."

His words, however, were more hopeful than realistic. The Bartella Christians attending Saturday's Christmas Mass spoke of the community's woes and their slim hopes of returning home.

With the central Baghdad government strapped for cash because of low oil prices and the spiraling cost of the war against IS, it is unlikely that monetary compensation will be dispensed to residents who lost their homes, or that large scale reconstruction will be undertaken in Bartella anytime soon.

Residents also have deep security concerns, arising mostly from the Iraqi military and security forces' meltdown in the face of IS's blitz across northern and western Iraq in the summer of 2014.

"People must first be compensated and services like water and electricity restored before they come back to live here," said Ramsen Matti, a 28-year-old accountant who now lives in Irbil with his wife and their only child, a daughter born in Bartella less than two months before they fled the town.

Altar boy Masar Jalal arrived with his father on Saturday, the 16-year-old's first visit to Bartella since he fled with his family to Irbil in 2014.

"I cried for what has become of the town," said Jalal. "I will only come back to live here if there is security."

He found some of his old clothes when he visited the family home, but the furniture was gone. "The clothes I found are too small for me now, but I also found a mug with my photo that a cousin of mine snapped. No one took that."