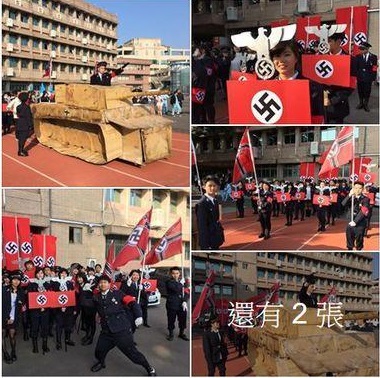 A letter supposedly written by a student of Hsinchu Kuang-Fu High School, which has been under fire for its students playing the Nazis in a cosplay show on Dec 23, lashed out at President Tsai Ing-wen and the minister of education for not standing up to them and for bowing to the pressure of Israel and Germany over the cosplay theme, which the author thinks is guaranteed by the constitutional right of freedom of expression.

The German Institute Taipei and the Israel Economic and Cultural Office in Taipei have expressed disappointment and condemnation over the Nazi cosplay after it came to light.

Following the condemnation, the Office of the President ordered the authorities to investigate the school’s responsibilities over the incident and apologize to related countries. The Ministry of Education has said it will reduce subsidies to the school.

To take the responsibility for the incident, the president of the private high school, Cheng Hsiao-ming, has apologized to the public and tendered his resignation, pending the approval of the school’s chairperson, who is abroad at the moment.

Cheng said the school will come up with a list of faculty, who should also be subject to punishment for their related responsibilities in the incident, including the class’ homeroom teacher and staff members at the department of student affairs organizing the event. But he said no students will be punished for the cosplay.

In the letter circulating on the Internet, the author said that they didn’t do anything wrong and asked why they and the school faculty had to be subjected to such humiliating criticism. “Why did the school president have to resign, faculty members be penalized, and the amounts of subsidies the school should receive from the government be reduced for a simple cosplay show?” the letter reads. “We are just high school students with no political activities and no political color…why should we have to understand all the taboos about Hitler…We just tried to imitate him and things related to him as best as we could in a cosplay show.”

In the letter, the author went on to lash out at President Tsai for her bowing to the pressure of Israel and Germany and penalizing the country’s citizens. The author said the minister of education had not come to the school to ask the students why they played Hitler and how they felt being the target of cyberbullying after the incident came to light.

Who the students want to dress themselves like in a cosplay show, just like buying clothes to dress themselves, are constitutional rights, the author said in the letter, adding that the ministry of education’s action against them is shameful.

The author called on all high school students in the country to stand up and protest for them by writing to President Tsai’s Facebook account.

The school's student parent association chairperson Liu Hsing-chao told reporters Monday that politics should have no place in education and urged the authorities not to suppress the students and teachers.

Liu said children's creativity was turned into a source of oppression, their confidence dissolved in an instance, and their moods for learning have been seriously affected, asking the authorities to stop victimizing the next generation of Taiwan.

In related stories, media reported that the high school president is a highly experienced teacher and administrator who is loved and respected by all the students and parents. A school staff member said that the incident had subjected the school faculty and students to great pressure, adding that the faculty members at the department of student affairs that organized the event felt especially low as they felt their action had caused such a nice president to resign.

A senior student of the high school surnamed Chen said the school president mingled well with all students and everybody called him by his name instead of his title.

She said she thinks the school’s cosplay theme this year was about historical people and the class that played the Nazis had done a good job as far as the costume and performance are concerned. “I didn’t expect it to be so serious” that it had to become an international incident, she said, adding that she felt the class must have been under great pressure and it was shocking and regretful that the school president has to go because of the incident.