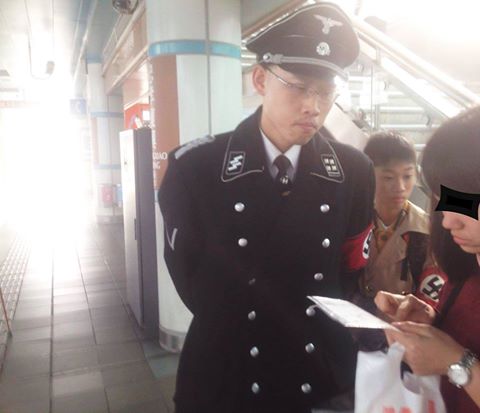 TAIPEI (Taiwan News) – On Christmas Eve, a day after photos circulated online of at least a dozen students wearing black uniforms with swastika armbands and holding Nazi flags and symbols at a high school in Hsinchu City, two Taiwanese men were photographed wearing Nazi uniforms at a Taipei MRT station.

A Follower on the Facebook group Another Side of Taiwan (台灣風情萬種) posted a photo of two males wearing what appeared to be Nazi uniforms. The two were photographed around noon at Zhongxiao Fuxing MRT station Taipei yesterday. The poster of the image, who preferred to remain anonymous, said that he took the photo as a man and a young boy walked past him "dressed as Nazis."

The adult male appears to be wearing a costume resembling a Nazi Waffen-SS, while the young boy appears to be wearing a replica of a Hitler Youth uniform. The Waffen-SS, was Hitler's most notorious military unit and was later declared a criminal organization and was convicted of war crimes and crimes against humanity at the Nuremberg trials for numerous documented atrocities they committed against civilians and soldiers throughout WWII.

Earlier today, the teacher of the students that sparked outrage by dressing as Nazis at a campus cosplay event in Hsinchu expressed remorse over the incident on Saturday, and said he hopes the public will give his students another chance. According to conservative estimates, Adolf Hitler and his Nazi Party followers were responsible for the death of 11 million people, including 6 million Jews, in what has become known as the Holocaust for the massive scale and depravity of the killings systematically carried out by Hitler's regime during WWII.

In modern Germany, the swastika and other symbols associated with the Nazi party are strictly banned by law.