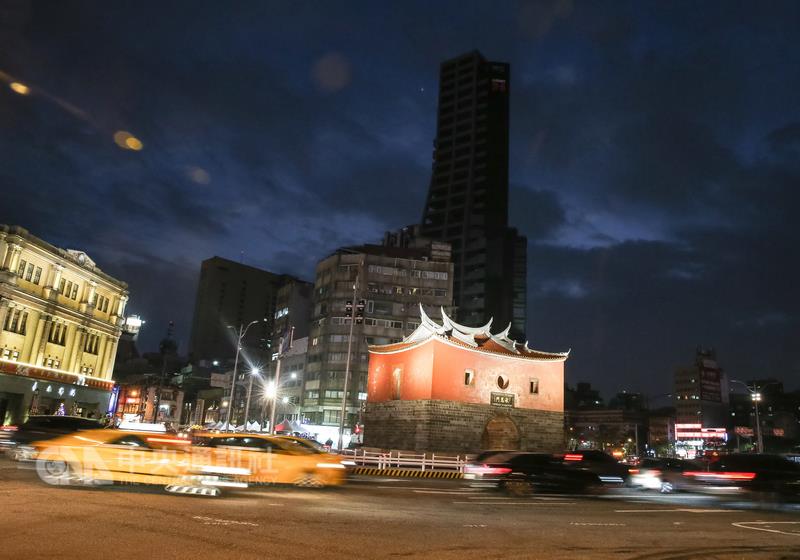 TAIPEI (Taiwan News) – Taipei’s North Gate area was lit up for a festive Christmas Eve as Mayor Ko Wen-je wanted to give citizens a new look at historic buildings Saturday.

The area a few blocks west from the Taipei Railway Station along Zhongxiao West Road features the red North Gate, built by the Qing Dynasty around 1884, the Beimen or North Gate Post Office completed by the Japanese authorities in 1930, and the future Railway Museum, also from the Japanese era.

While the gate and the post office will be lit up each evening, the museum will only be so on Christmas Eve, the city government said.

Taipei City Mayor Ko Wen-je said Saturday that his government did not have any Christmas presents for the citizens, but that he nevertheless hoped that the lights which showed off the historic buildings of the North Gate area would provide onlookers with a happy “silent night.”

The project to refurbish the whole area will not be ready until next June, but Ko said he agreed with Vice Mayor Charles Lin that citizens should not have to wait that long to see the beauty of the architecture.

Until June, the lights focusing on the North Gate will work in tandem with the street lights, while the lights on the post office will shine from 7 until 9 each evening, as decided after talks with the National Chiao Tung University, which occupies part of the building.

The North Gate is the only true relic from late Qing Dynasty Taipei. After Japan took control of Taiwan, it demolished the city walls and some of the gates to make way for wide boulevards, as was the fashion in Europe at the time.

Ko once joked about the area that it was dominated by a “Republic of China esthetic,” a sarcastic reference to the many advertising billboards that were clogging up the view near the North Gate.