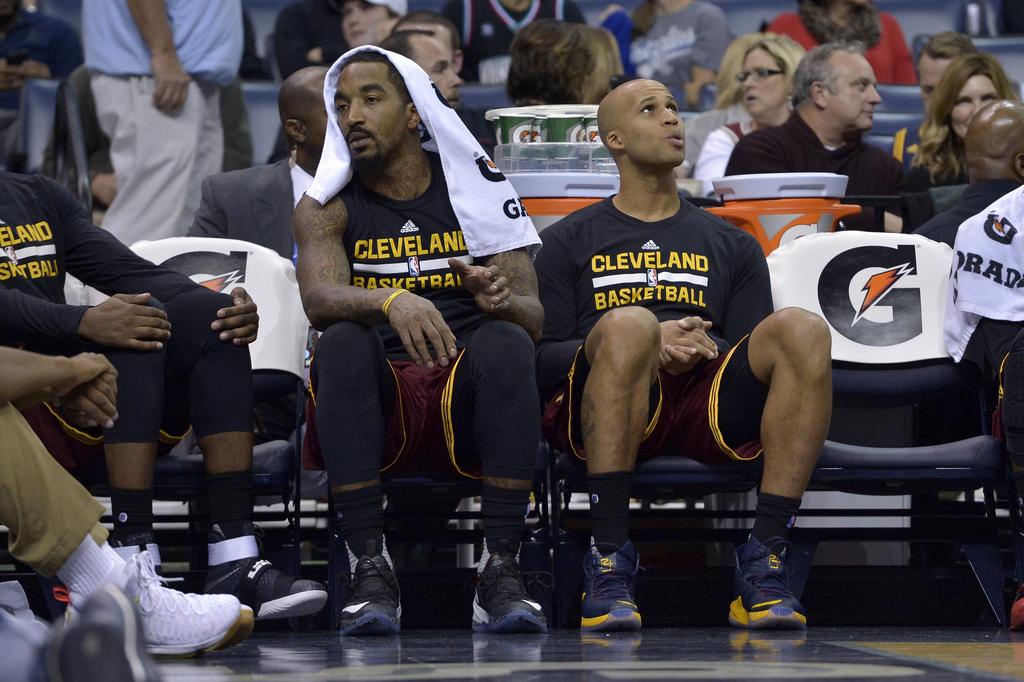 "There are no excuses," he said Wednesday night before the Cavs hosted Milwaukee.

With starting guard J.R. Smith sidelined indefinitely with a broken right thumb and Kevin Love missing at least one more game with a bruised knee, Lue will be forced to change his rotations, find some scoring and a defensive stopper.

"We're going to miss J.R.," Lue said, "his effort on defense, his tough shot making. But it's no excuses for us. It's next man up and we've got to be ready to play. We've got to do it by committee. I think our guys are ready to step up to the challenge."

Smith got hurt late in the second quarter Tuesday night against the Bucks and didn't return after halftime as the Cavs won 114-108 in overtime. X-rays taken after the game in Milwaukee were inconclusive, but further tests in Cleveland revealed the fracture.

The Cavs aren't putting a timeline on know how long Smith will be sidelined. Typically, injuries like Smith's require at least one month of recovery time, but the severity of the break is not known and his return date won't be determined until after the operation.

Smith's surgery has not been scheduled, Lue said.

Smith's injury is the latest and most serious medical setback for the Cavs, who are 20-6 going into Wednesday's home game against the Bucks. Love, who is having an All-Star season, missed Tuesday's game and is not expected back until Friday, when the Cavs host Brooklyn. Reserve center Chris "Birdman" Andersen suffered a season-ending knee injury last week in practice.

With Smith out, Lue will have to balance not overworking stars LeBron James and Kyrie Irving.

James played 47 minutes and Irving 45 on Tuesday, but Lue said both would play in the second game of the back-to-back. The Cavs plan to trim James' minutes in January and February, but for now the 31-year-old is not asking to sit out. He's averaging 37.3 minutes per game, but Lue isn't worried the Cavs are overworking the superstar.

"He knows his body better than anyone," Lue said. "He's been doing this for a long time and he said he feels great and on nights he doesn't feel great, he won't play. He wants around 38 or 39 minutes a night and then he said in January or February we'll tailor him down. As of right now, that's the plan."

Cleveland has some current roster issues with Andersen and Mo Williams (knee surgery) taking up two spots. Cavs general manager David Griffin has been in the market to find a backup point guard — Iman Shumpert and James have been getting some of those minutes — and could now be forced to find another wing player.

Lue, though, said Griffin remains focused on a backcourt addition.

"We're a good team, still," Lue said. "We're 20-6. So no excuses. Until we get a chance to get something done and I know Griff will, he always does, he always comes through so. I told Griff to take his time. We are 20-6 and we don't want to just settle for any point guard. We want to make sure we have the right piece that can help us win a championship. With Griff at the helm, I know he'll get something done. He always pulls out something magical."

Smith has become a huge fan favorite in Cleveland. He had a major role in the Cavs beating Golden State in last season's NBA Finals, dropping two big 3-pointers in Game 7, and then became something of a cult figure when he showed up shirtless to the team's celebratory downtown parade.

He held out of training camp for a new contract and the Cavs eventually signed him to a four-year, $57 million deal.

Smith has had a bumpy start this season, missing five games with an ankle problem and hyperextended knee. He's averaging 8.6 points, but has been slowly emerging from a shooting slump.