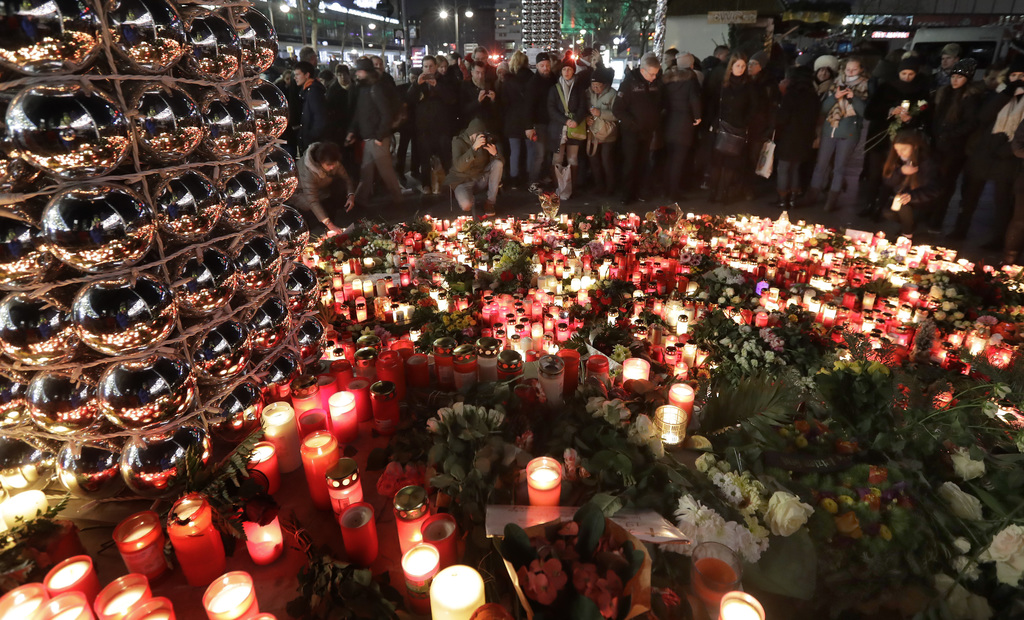 NEW YORK (AP) — In the wake of the Berlin truck attack, police departments around the U.S. are making a show of force at places where crowds gather at Christmastime.

In New York City, police dispatched heavily-armed counterterrorism officers to stand guard at crowded pop-up Christmas markets in Union Square, Bryant Park and Columbus Circle only an hour after news broke Tuesday about the carnage in Berlin, where a stolen truck slammed into a crowd and killed 12 people.

The police department also has a program to encourage truck rental companies to report any suspicious interactions with people wanting to rent vehicles that might be used in an attack.

In Chicago, police parked their vehicles diagonally at the corners of Daley Plaza to block any vehicle access to a Christmas market there. In San Francisco, motorcycle and mounted horse units will were patrolling in high-traffic shopping areas.

Frieder Frotscher, who owns a stand that sells German steins, has made the trip to the Chicago market from Sachsen, Germany, for the past 21 years. He said he never considered closing after what happened Monday.

"I see all the increased security," he said. "If we don't come that means we would have reached the decision that they (terrorists) want."

In New York, a Columbus Circle vendor said he wasn't thinking about the attack in Berlin.

"If something happens like that it could happen anywhere," said Armand Altan, 40. "We are open. There is no X-ray cameras or security checking everybody. Someone could walk inside with the vest or with the backpack, you don't know. So if we think like this, we shouldn't go outside from the home."

Big cities have been fortifying sidewalks since the Sept. 11 attacks, installing bollards and concrete planters designed to prevent vehicles from driving into pedestrians or the side of a building. Parts of Times Square and a two-block stretch of Pennsylvania Avenue in front of the White House have been closed to traffic for years, partly as a precaution against car bombs.

A recent posting in an English-language Islamic State magazine called this year's Macy's Thanksgiving Day parade "an excellent target" for a truck attack. That caused enough concern that police used dozens of sand-filled dump trucks to block streets along the parade route.

The NYPD program involving outreach to trucking companies was ramped up in July after a man drove a rented, refrigerated truck weighing about 20 tons into a crowd in Nice, France.

Since then, the NYPD has reached out to about 140 rental companies and seven truck driving schools in the city, giving them the phone numbers of detectives and encouraging them to use them, said Lt. Lucas Miller, who runs the Intelligence Division program.

The NYPD has received several calls from truck rental operations since the Berlin attack, Lucas said Wednesday. The companies were checking in, not offering tips, "but that's just the kind of communication and interaction we want," he said.

Jake Jacoby, president of the Truck Renting and Leasing Association in Alexandria, Virginia, said his group has worked with the Transportation Security Administration and other federal agencies to combat terror.

The group has distributed a brochure to its members about what should raise suspicions with renters. They include attempting to use cash rather than a credit card and inquiring whether a truck can be modified to carry heavier loads or go faster.

Anybody walking in without a reservation should also get extra scrutiny and possibly be turned away, Jacoby said. The group even suggests asking customers how they plan to use a truck, he said.

"If they have trouble answering that question, that's a red flag," he said.