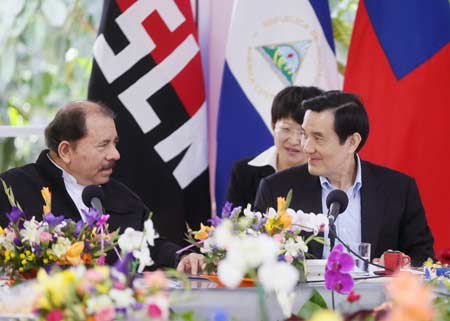 TAIPEI (Taiwan News) – Following Sao Tome and Principe, the Central American nation of Nicaragua might be the next ally to break diplomatic ties with Taiwan, according to sources.

Taiwan’s Ministry of Foreign Affairs confirmed and announced Wednesday that the small west African country of Sao Tome has made an announcement to end diplomatic relations with Taiwan.

Taiwan now has diplomatic relationships with only 21 countries.

Sources revealed that Sao Tome had recently asked for financial assistance of up to US$200 million dollars, but was turned down by the ROC government due to its unwillingness to engage in “dollar diplomacy.”

Deputy Foreign Minister Javier Hou in the press conference today hinted that there is one more ally that is having an unsteady relationship with Taiwan and is most likely to be the next to severe ties, but declined to specify which.

According to media reports, citing informed sources, the Taiwan-Nicaragua relations have turned sour recently due to a change in the attitude on the part of Nicaragua. The Central American nation has reportedly been attempting to build closer relations with Beijing.

The Presidential Office has not confirmed or denied the reports.