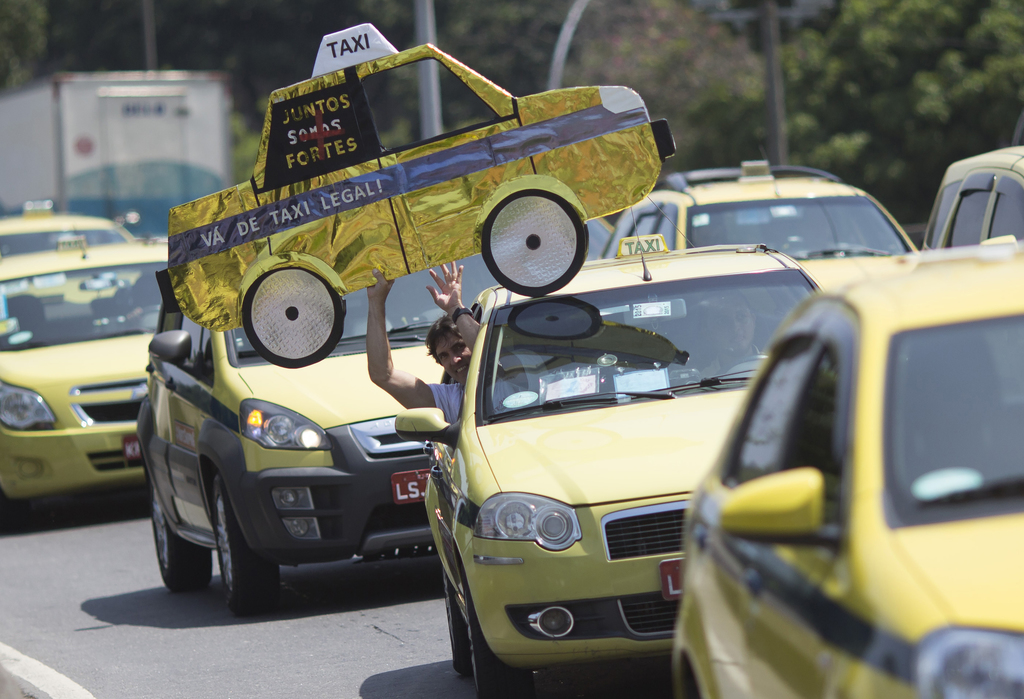 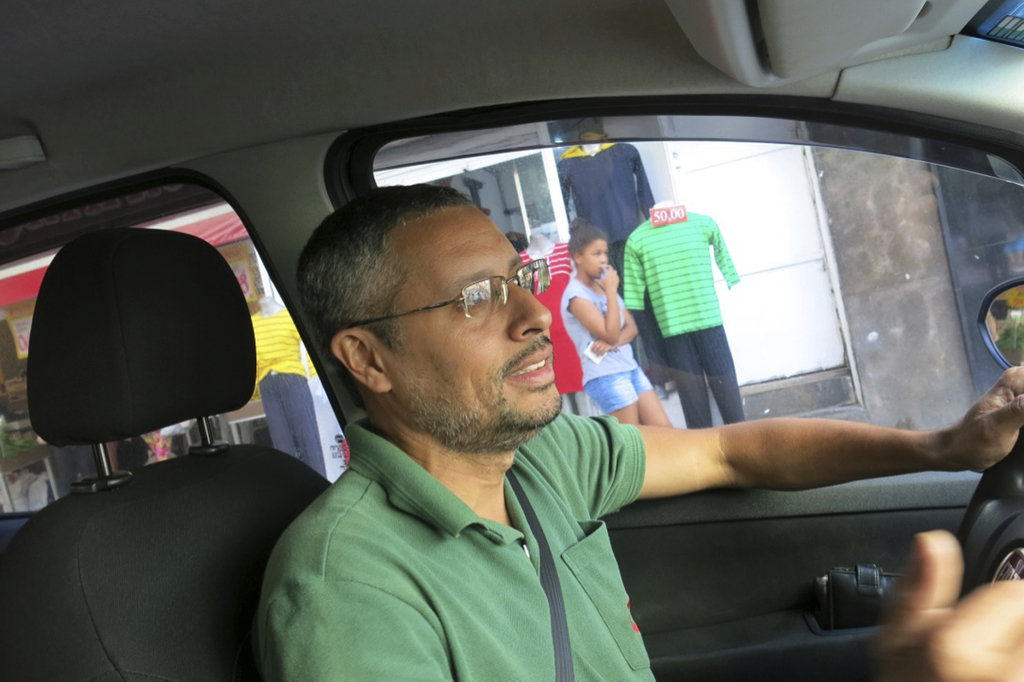 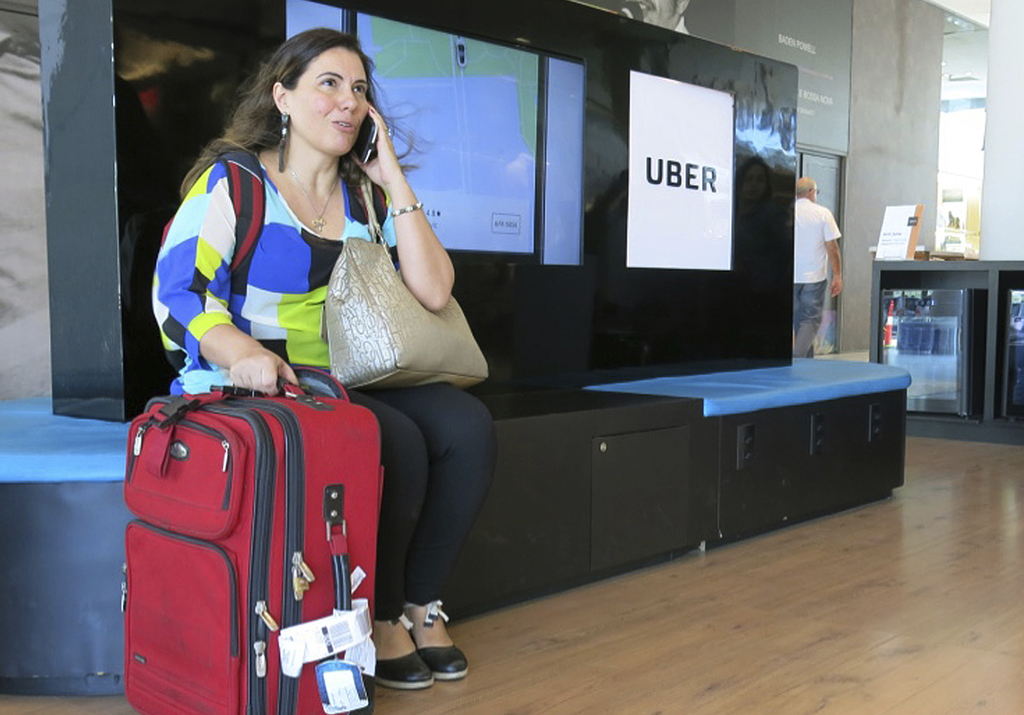 Introduced in Brazil just over two years ago, use of the app has increased so quickly here that the South American giant now represents Uber's third largest business worldwide, after the United States and India.

The rocketing growth, however, is also a race against time: local governments are moving toward regulating and taxing the company in ways that may hurt its competitive advantage while taxi unions are pushing to ban it entirely.

"There are many issues with Uber now because it's become a big business in Brazil," said Fabro Steibel, executive director of the Institute of Science and Technology, a Rio-based think tank. "It's too early to know if Uber will be a major problem or a major solution" to the country's transportation needs.

The U.S.-based company is operating in 37 Brazilian cities, including Rio de Janeiro, the capital of Brasilia and economic powerhouse Sao Paulo. The company boasts 8 million "active users" and more than 50,000 Uber drivers in Brazil. It has benefited from a confluence of factors.

Brazil's economy is mired in its worst recession in decades, with many riders looking to save money and a ready supply of potential drivers who are otherwise unemployed or underemployed.

A strong car culture in Brazil, similar to the United States, combined with relatively good roads has allowed for growth that would be impossible in other, poorer Latin American countries.

In contrast to the situation in China, where Uber China had a drag-out fight with rival Didi Chuxing before being acquired by Didi in August, in Brazil Uber has no significant competition.

And while Brazil is known for a byzantine government bureaucracy and high taxes, such regulation has yet to catch up with the sharing economy.

Slowly, however, that is changing, which could make it harder for Uber to continue offering steeply reduced rates to capture market share.

Taxi unions nationwide are pushing a bill before Congress that would ban the company. Thousands of drivers from around the country gathered for a protest in Brasilia last month.

In Rio, Mayor Eduardo Paes signed legislation last month to prohibit the use of private vehicles for paid rides, essentially banning the use of ride-hailing apps. Earlier this year, however, a Rio judge ruled that private drivers would have the right to continue operating until the activity was regulated at the federal level. Appeals are in process.

In Sao Paulo, where Uber pays a few cents per kilometer into a municipal fund, the city government is set next month to roll out a series of regulations, including surprise inspections of accounts of ride-sharing companies.

Taxi drivers argue that Uber drivers have an advantage because they don't face the same bureaucratic hoops, including several inspections each year, a litany of taxes and keeping comprehensive insurance.

"It's hard to even have hope," said Fabio Freitas, a 37-year-old taxi driver in Rio who used to make $84 per day but now makes half of that. "Uber is destroying our profession."

Freitas says he is looking into factory work, as he can go hours without picking up a passenger.

Uber, a privately owned company, declined to provide revenue numbers in Brazil. But the company says accusations that it's unregulated or unfairly competing are wrong.

Its drivers must have a valid driver's license with a special annotation allowing them to drive professionally. They must also get a background check, register their vehicle and carry insurance. All cars must have four doors and air conditioning.

Telles said that Uber's rating system allowed the company to weed out any bad drivers. He said the company was working to ease traffic jams in big cities by offering a pool service, and said the platform was helping thousands of drivers support their families.

How much of a living driving for Uber can provide, however, is debatable. The company takes 20 to 25 percent off the top of each ride, already sharply discounted fares compared to taxis.

Marcos Vinicius, a 30-year-old Rio resident who lost his job at an offshore oil company, began driving for Uber a few months ago. He spends $235 a week to rent a 2015 Nissan sedan, plus another $100 for insurance and gas. In a good week, he'll pull in a little over $400 from rides, meaning his net is about $100.

Even if he owned his own car, as many Uber drivers do, he figures the maintenance costs would be high from so many hours on the road. Despite the drawbacks, he says it's worth it.

"For me, it was either this or die of hunger," said Vinicius.

For riders, the biggest draw is clearly cheaper prices. Many customers are even finding ways to take Uber from places that only taxis can legally go, like bus stations and airports.

On a recent day, Laura de Oliveira Cortines and her boyfriend exited Rio's Santos Dumont airport and walked one block to a neighboring strip mall. There they waited for a driver to pick them up at a stand with Uber signs and young women wearing shirts that said, "How can I help you?" in various languages.

"We only take taxis when we can't get an Uber," said Cortines, a 25-year-old veterinarian.