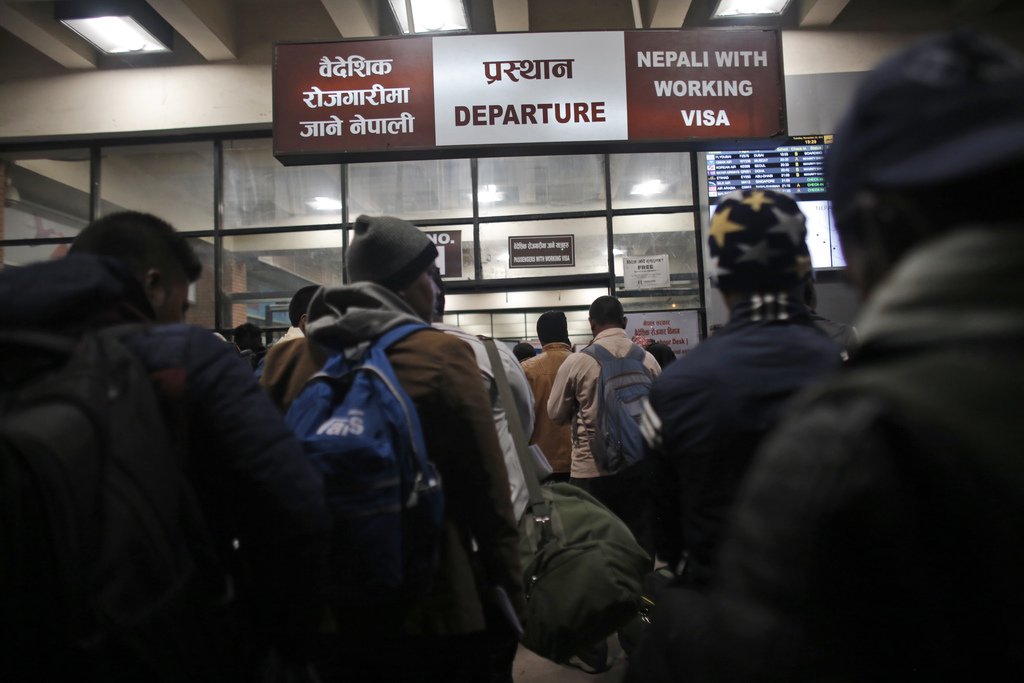 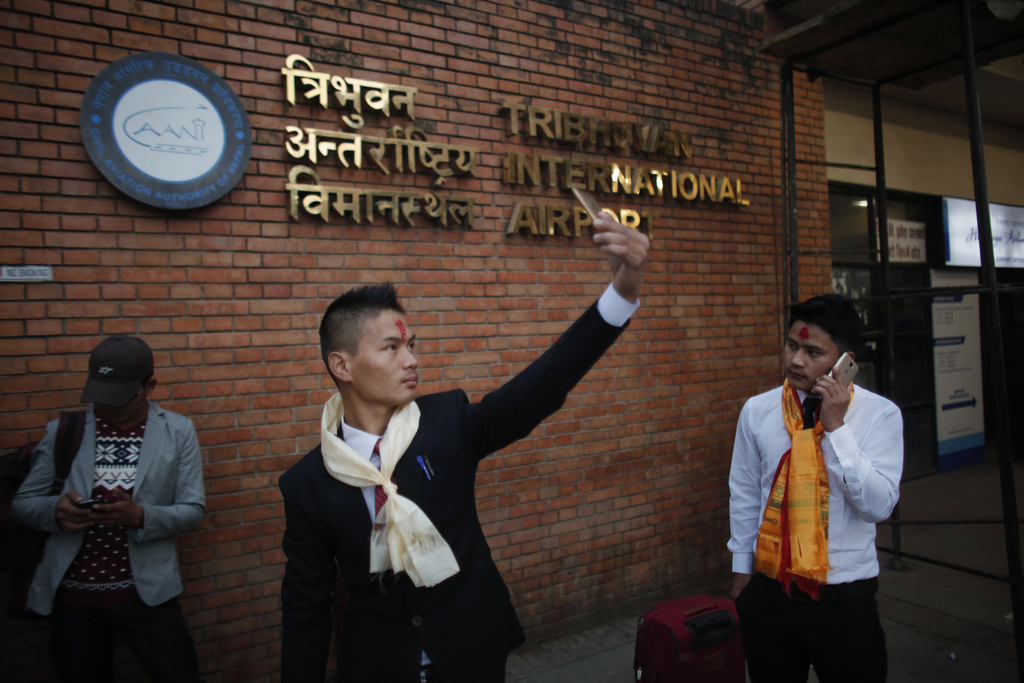 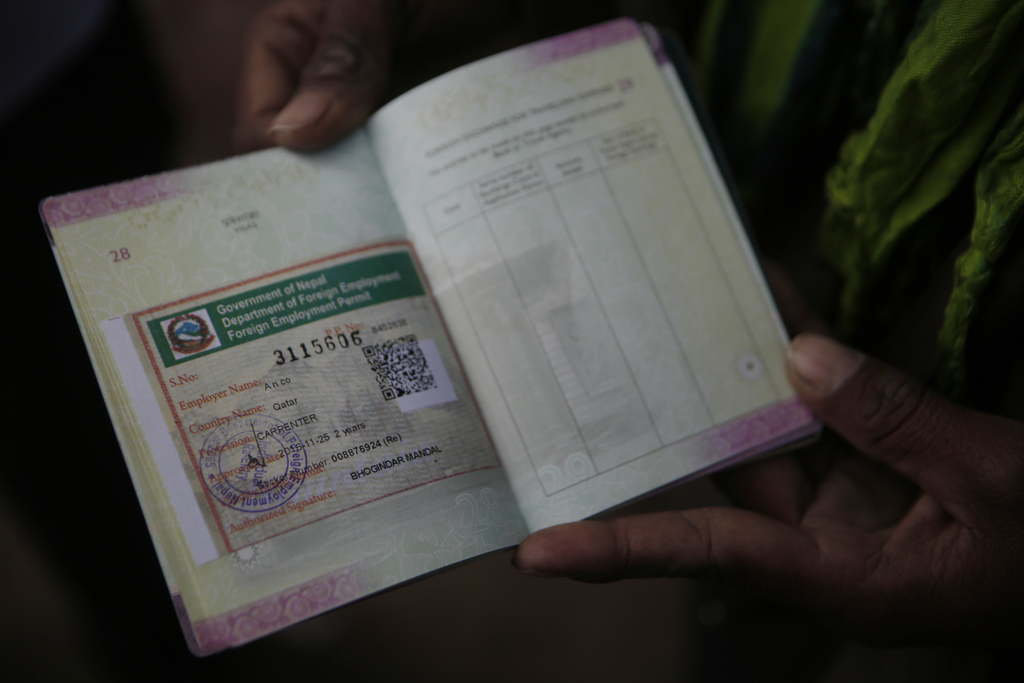 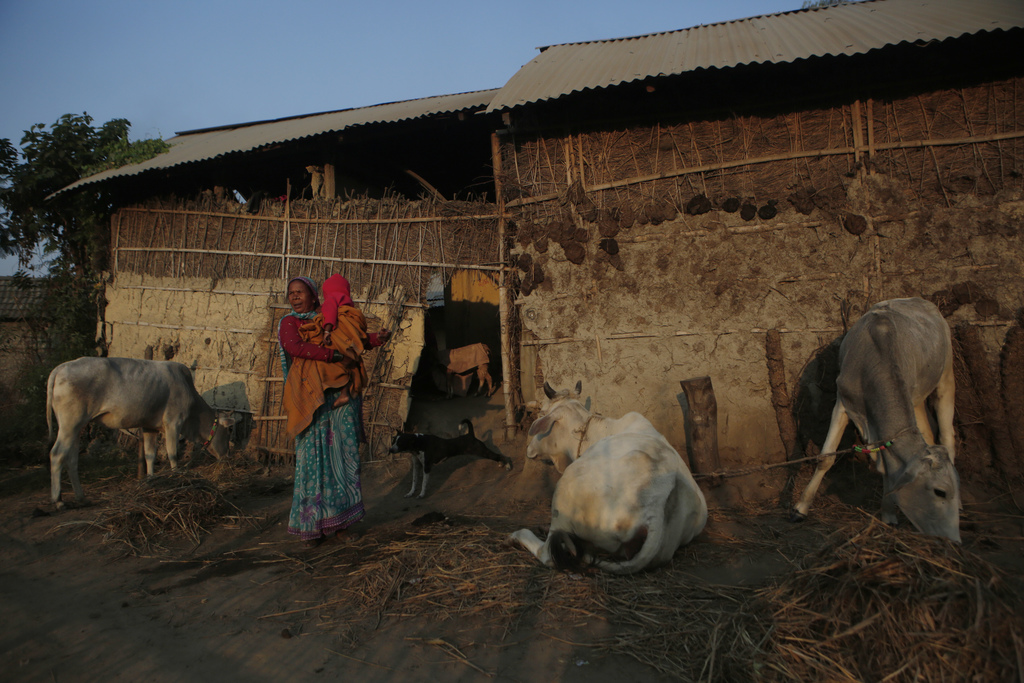 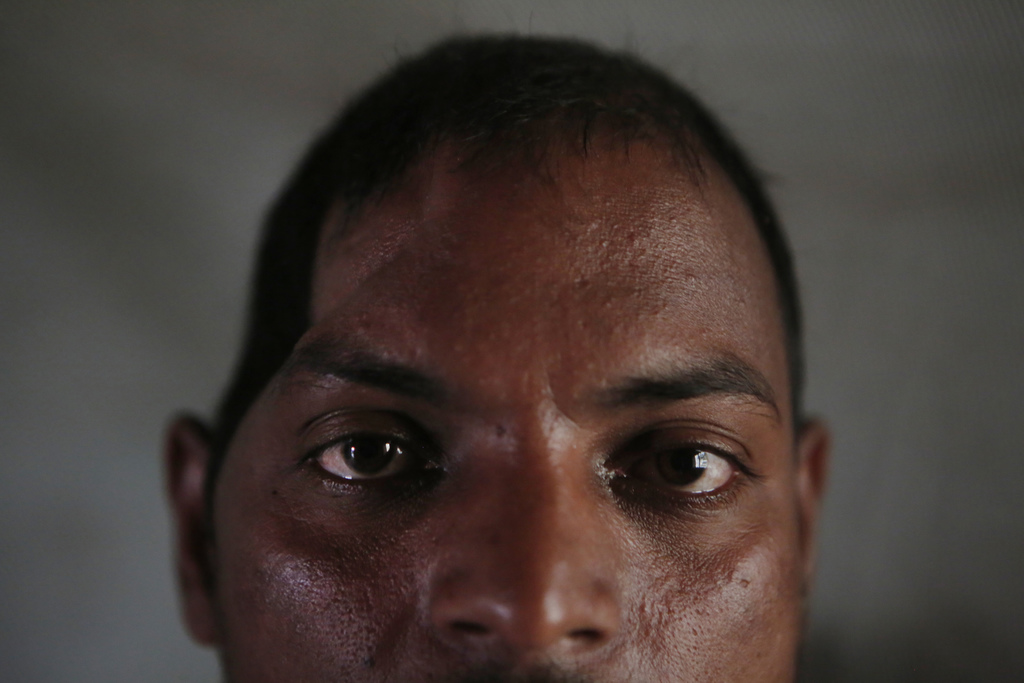 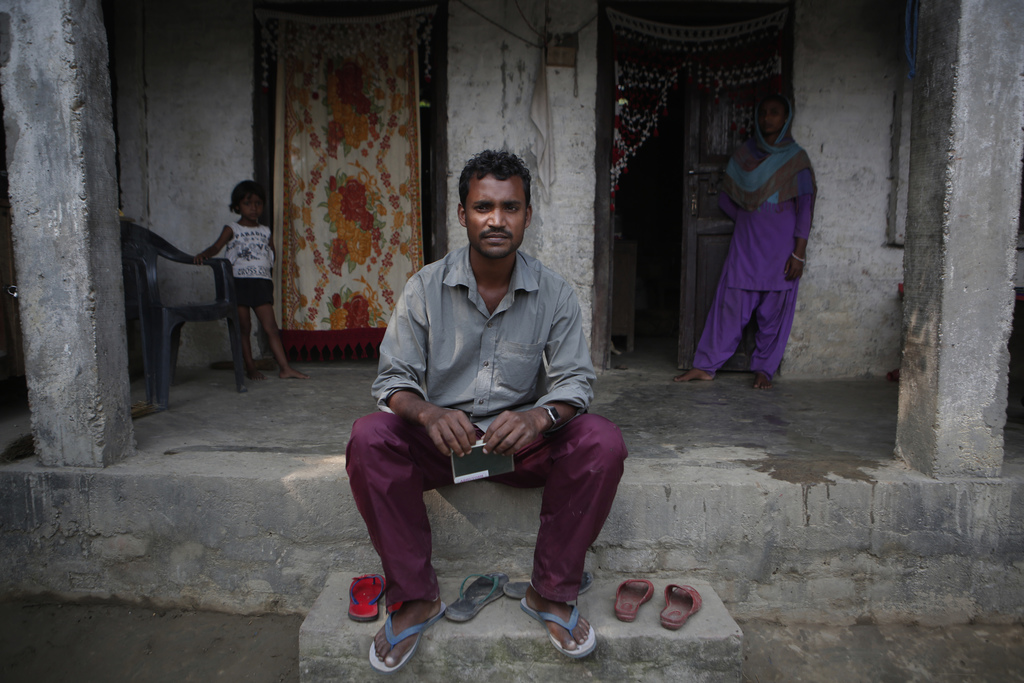 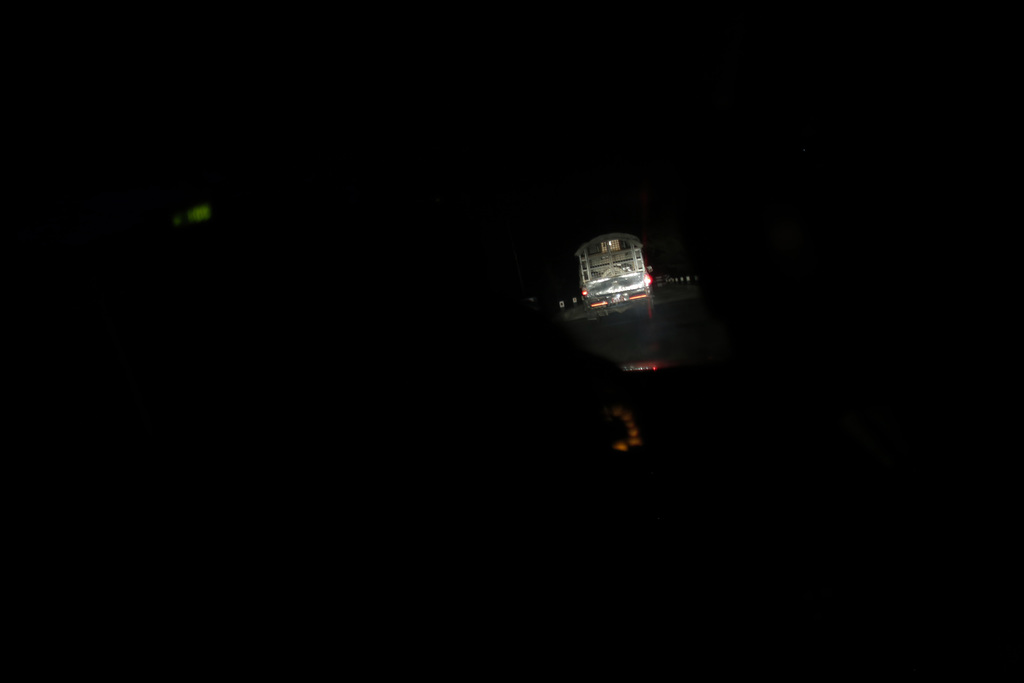 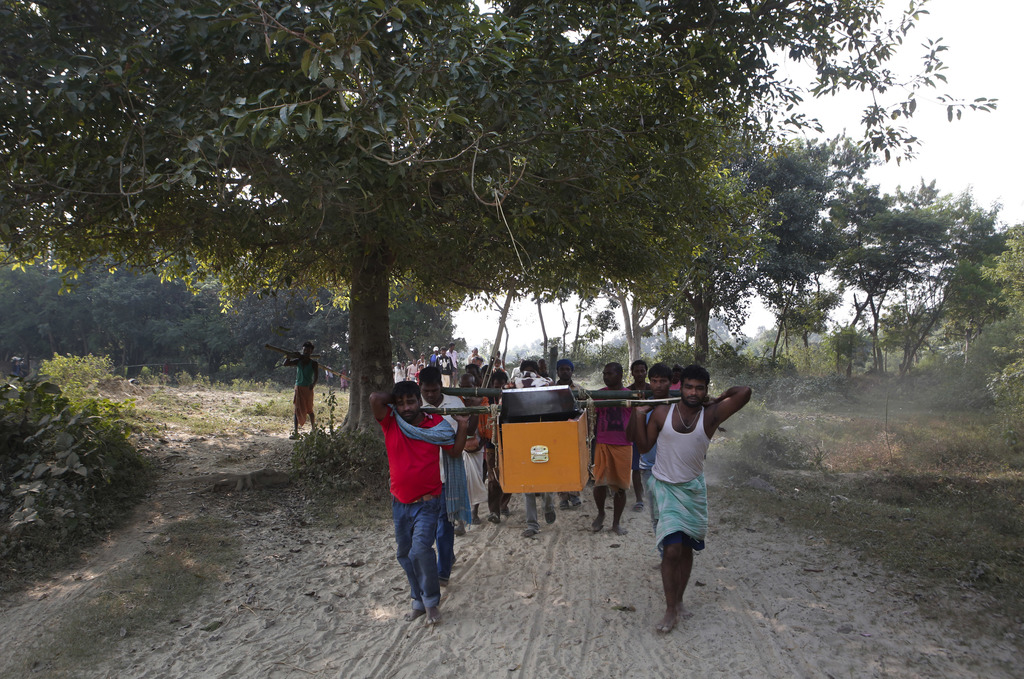 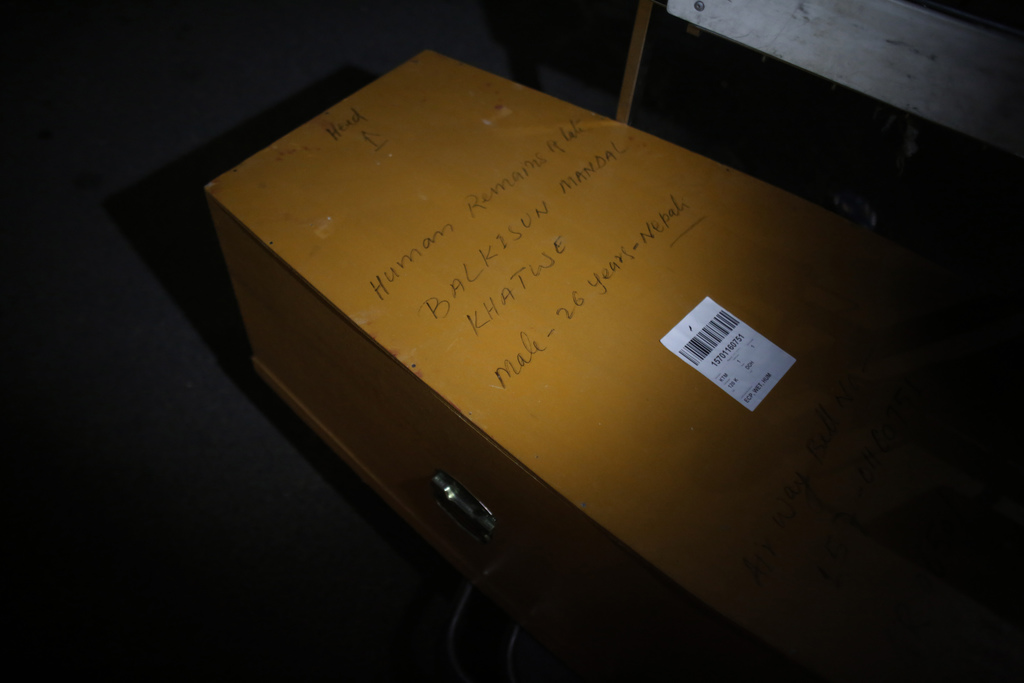 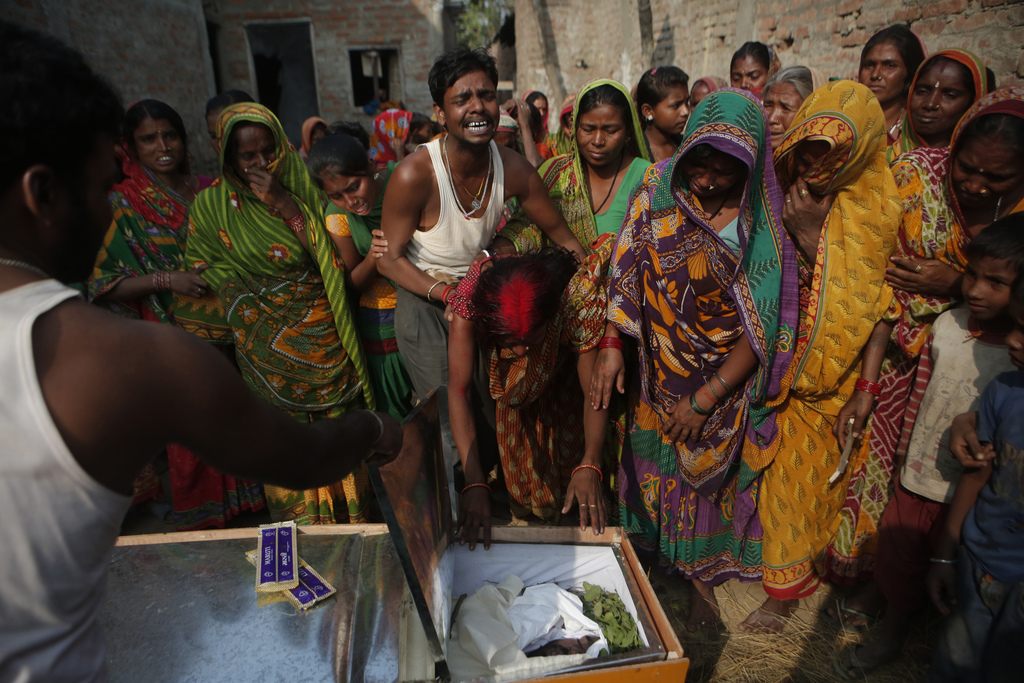 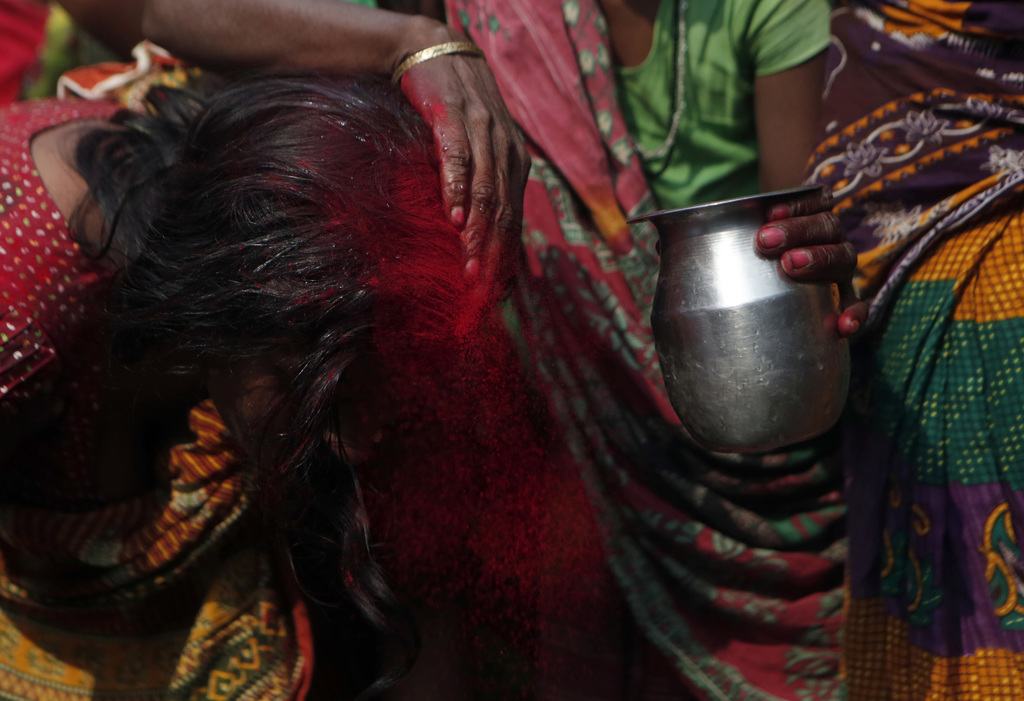 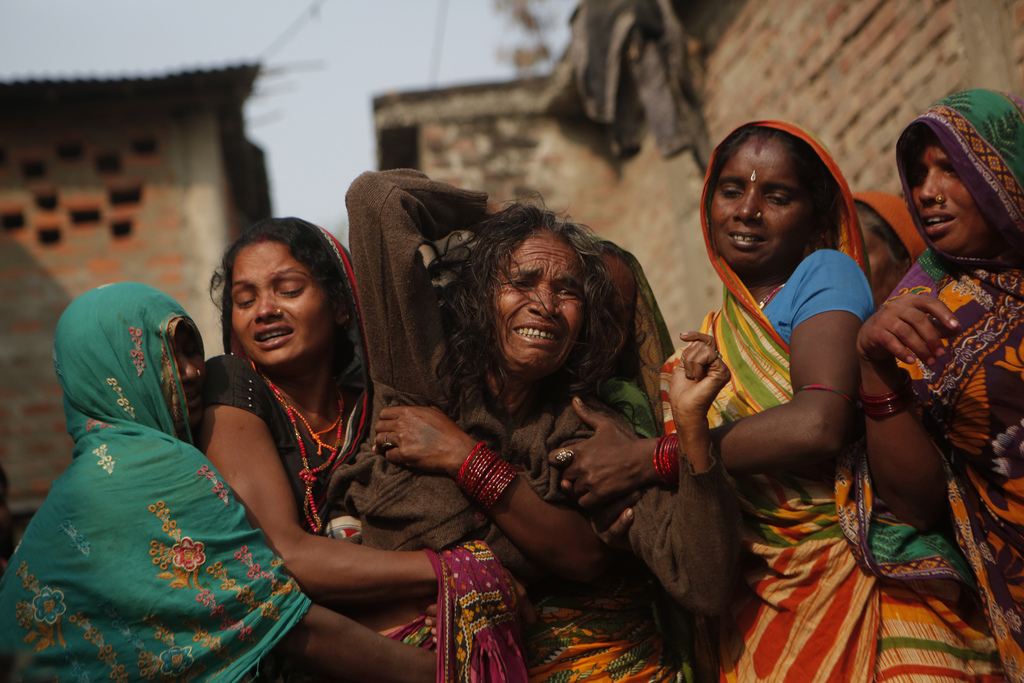 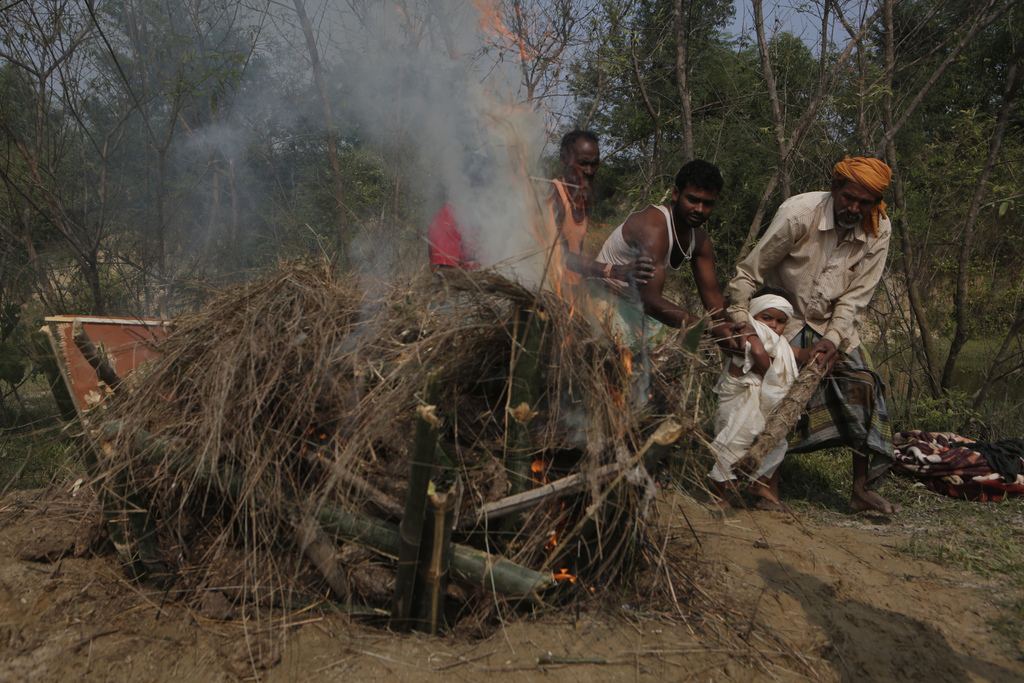 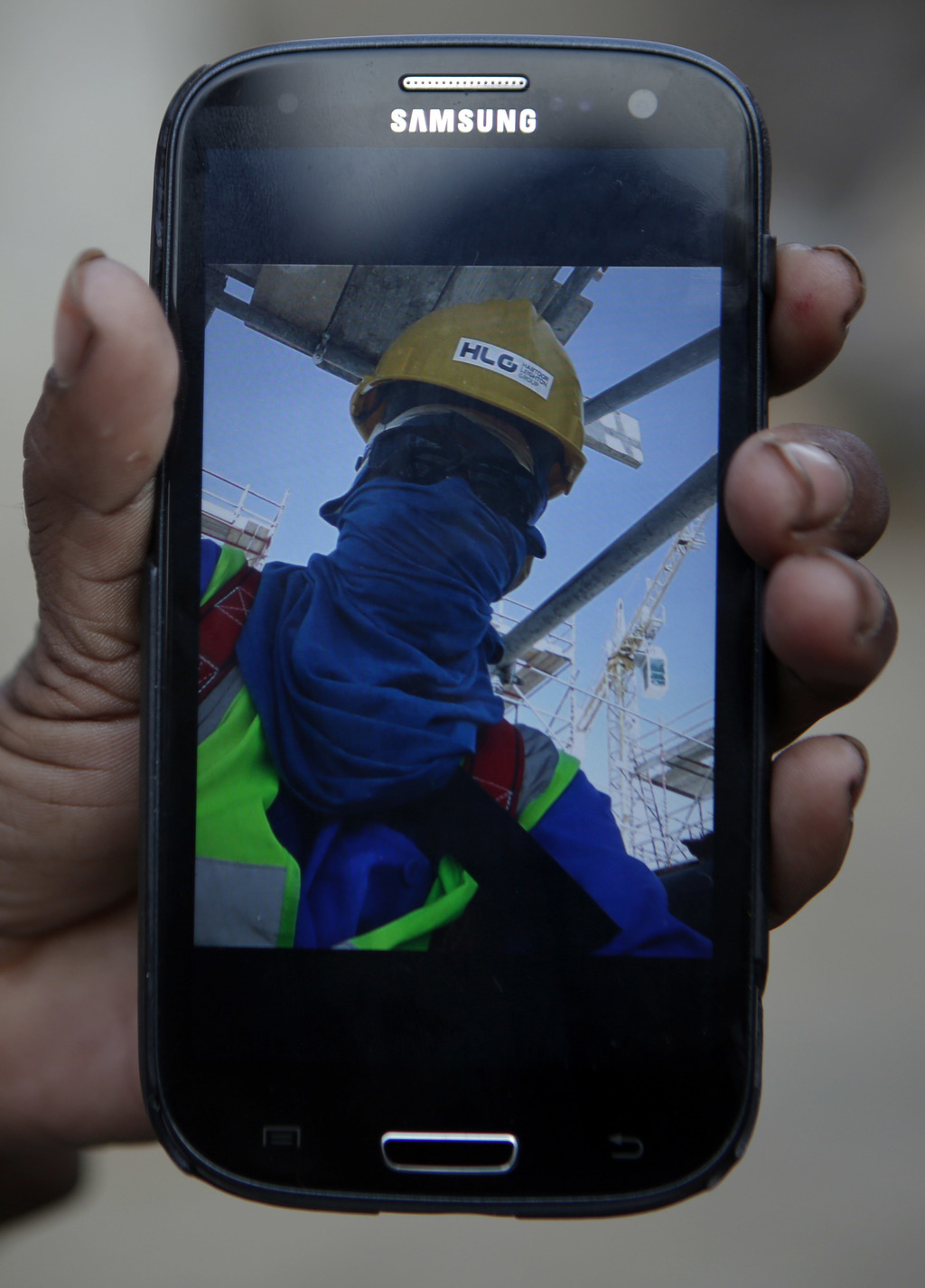 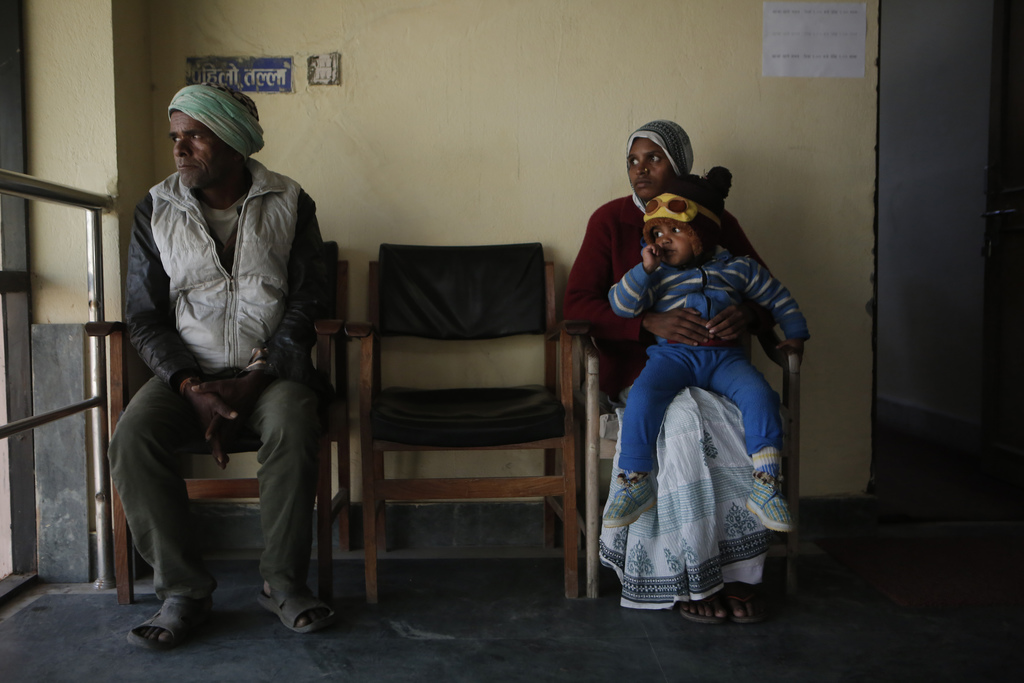 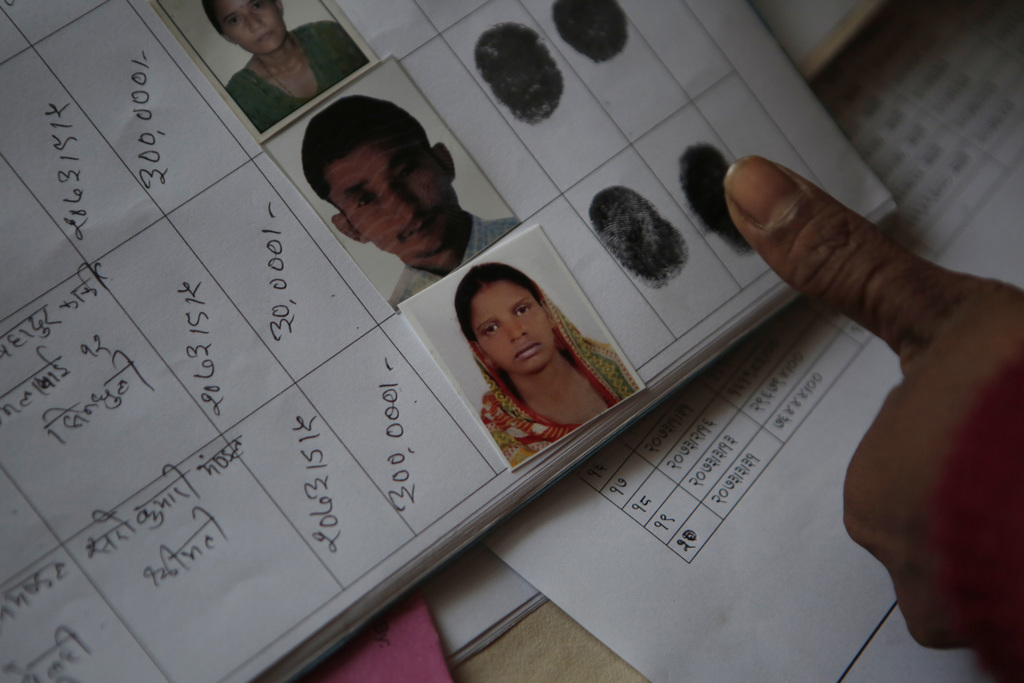 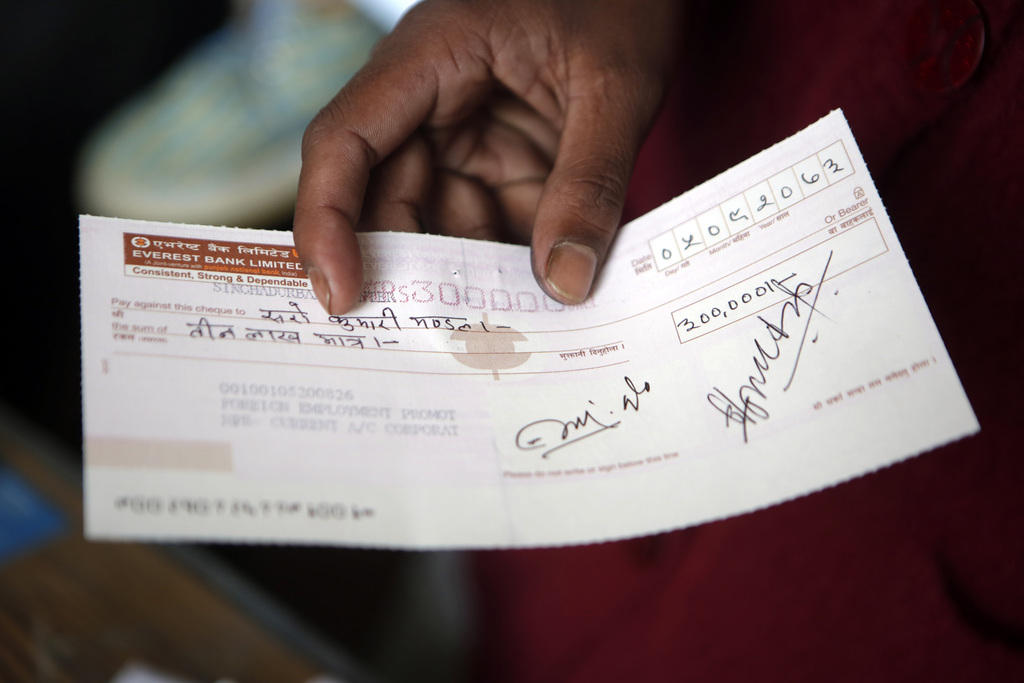 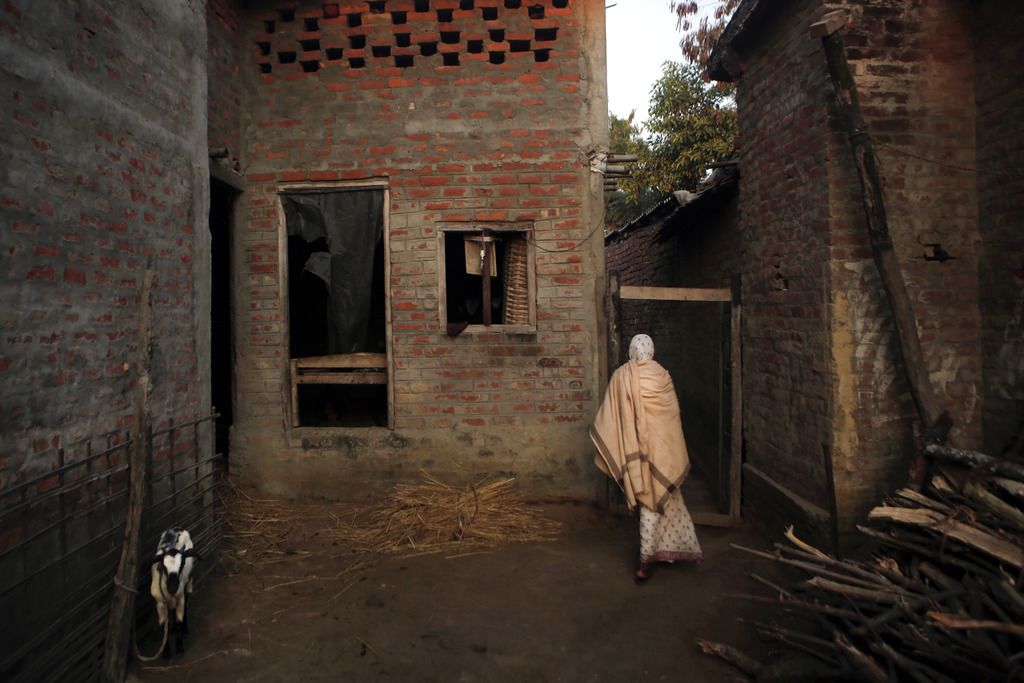 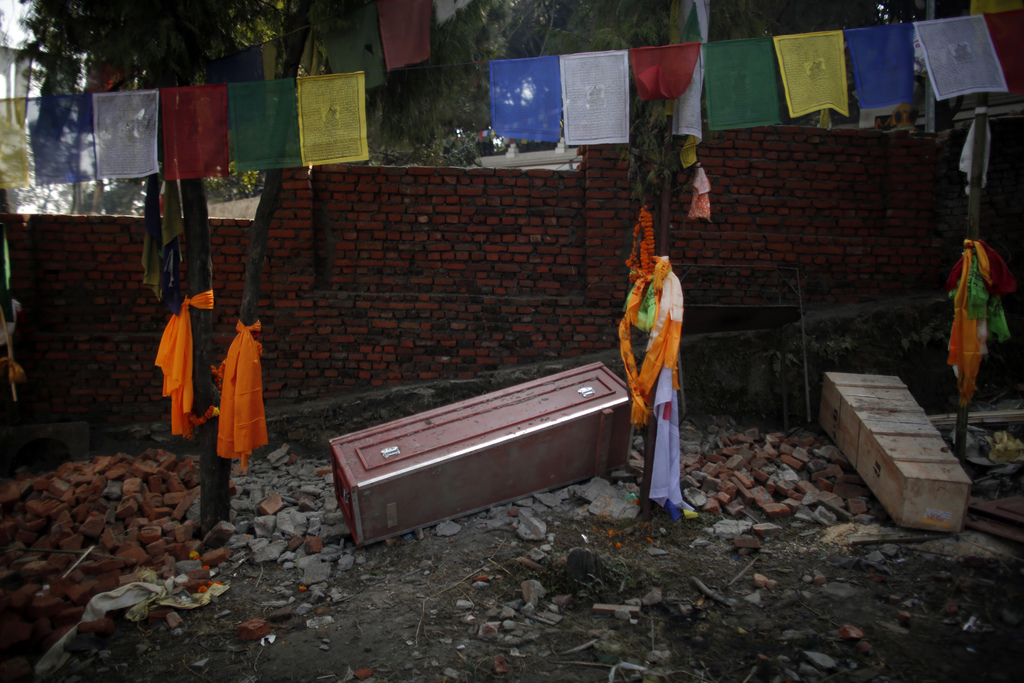 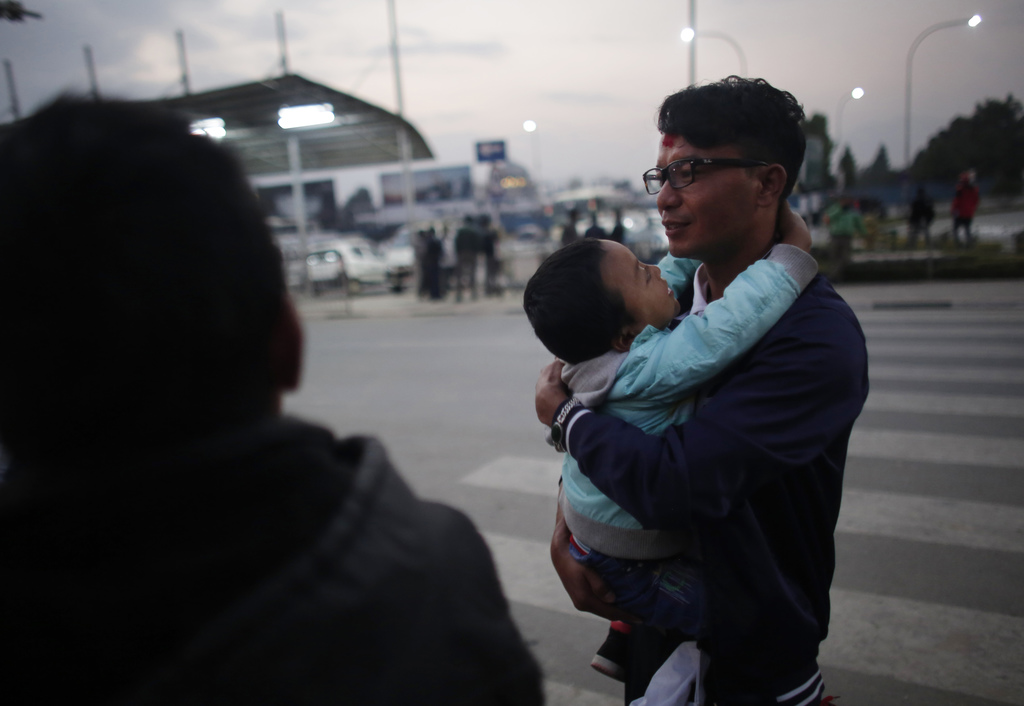 KATHMANDU, Nepal (AP) — A tiny young woman crouches just outside the airport, crying softly into her thin shawl. It's cold, but her sleeping toddler is warm in her arms.

Hundreds of young Nepali men wave goodbyes. On this day 1,500 fly out of the Kathmandu airport for desperately needed jobs, mostly in Malaysia, Qatar or Saudi Arabia. But on this day, too, six come back in wooden caskets, rolled out of baggage claim on luggage carts.

The number of Nepali workers going abroad more than doubled after the country began promoting foreign labor in recent years: from about 220,000 in 2008 to about 500,000 in 2015. The number of deaths among those workers has risen much faster. One out of every 2,500 workers died in 2008; last year, one out of every 500 died, according to an Associated Press analysis of data released by Nepal's Ministry of Labour and Employment.

In total, over 5,000 workers from this small country have died working abroad since 2008— more than the number of U.S. troops killed in the Iraq War.

The causes are often listed as natural death, heart attack or cardiac arrest — the men go to bed after an exhausting day of work and never wake up. That's what Saro was told happened to Balkisun.

Now medical researchers say these deaths fit a familiar pattern: Every decade or so, dozens, or even hundreds, of seemingly healthy migrant Asian workers start dying in their sleep. It happened in the U.S. in the late 1970s, in Singapore about a decade later and more recently in China. The suspected killer even has a name: Sudden Unexplained Nocturnal Death Syndrome.

Next year, an international consortium is launching to investigate. For today's arrivals, they're too late.

About 10 percent of Nepal's 28 million residents work abroad. They send back more than $6 billion a year, 30 percent of the country's revenues. Only Tajikistan and Kyrgyzstan are more dependent on foreign earnings.

"Nepalese workers are well known for their hard work, dedication and loyalty," boasts the Nepalese Embassy website in Doha, Qatar, where a construction boom employs about 1.5 million migrants from many countries. The "comparatively cost effective" Nepali workers are experienced at "working in the extreme climatic conditions," says the embassy.

Nepalis build highways, stadiums and houses in Gulf states and guard shopping malls, sew sweatshirts and assemble televisions in Malaysia. Anyone who has bought imported sportswear or electronics, or who plans to go to the 2022 World Cup in Qatar, may be using the products of their labor.

The migrants pay recruiters about $1,100 for the jobs. If they're not tricked out of their earnings — and some are — they can send home about $300 a month.

Department of Foreign Employment spokeswoman Rama Bhattarai says some deaths are inevitable: "They die as foreign employees, they die here when a bus goes off a cliff."

Balkisun's body arrives on an 8 p.m. flight. He died in his sleep six weeks after he left Nepal, at 26, to help build highways as part of World Cup infrastructure improvements, said his Qatar-based Habtoor Leighton Group supervisor, Ganesh Khang Mandal.

At the airport, the casket slides easily into a custom-welded coffin rack on one of 10 trucks Nepal's government provides to bring bodies back to villages.

Saro and 3-year-old son jolt around the backseat for a precarious, eight-hour journey home to Belhi village.

The family is marginalized in every way: Ethnically, they're from the "untouchable" caste, and they speak Maithili, a language more common in India, a few miles south. They live eight to a room in a mud-and-stick home among sparse rice paddies. A shared cellphone is passed from house to house. Chronically hungry, they survive on less than $1 a day.

When the truck reaches Belhi, hundreds of women in traditional saris, men in work clothes and children pour into the narrow dirt street, tears streaming down their faces. Some stand on rooftops. Others crowd a balcony.

Mohammed Tohit, 28, watches from across the street. He is the envy and inspiration of his neighbors: Six years of sewing for Nike, Lacoste and Columbia Sportswear in Malaysia helped him buy a sturdy, cement two-bedroom house, a small farm, a cow, a goat and a television set. He's leaving for Saudi Arabia in 10 days.

What causes deaths like Balkisun's? Medical journals associate Sudden Unexplained Nocturnal Death Syndrome with genetics, infection and nutritional deficiencies. In Nepal, authorities say it could be stress, a changed diet, even homesickness, brought on by physically demanding jobs in extremely hot climates.

While the causes of previous strings of deaths haven't been pinpointed, fatalities dropped in each case when workplace safety, housing and diet improved.

Cardiac epidemiology researcher Nirmal Aryal at University of Otago in Wellington, New Zealand, recently published "A Call for Public Health Action" in the Asia-Pacific Journal of Public Health about the deaths. He's organizing an international collaboration to investigate.

At Balkisun's village, his wife falls screaming and crying onto the road and is carried inside. About 50 men bring his body on a bamboo platform to a river.

His young son is purified, dipped naked in the river. He's wrapped in white cloth. And with his uncles' hands guiding his own, he takes a bundle of burning twigs and lights his father's funeral pyre.