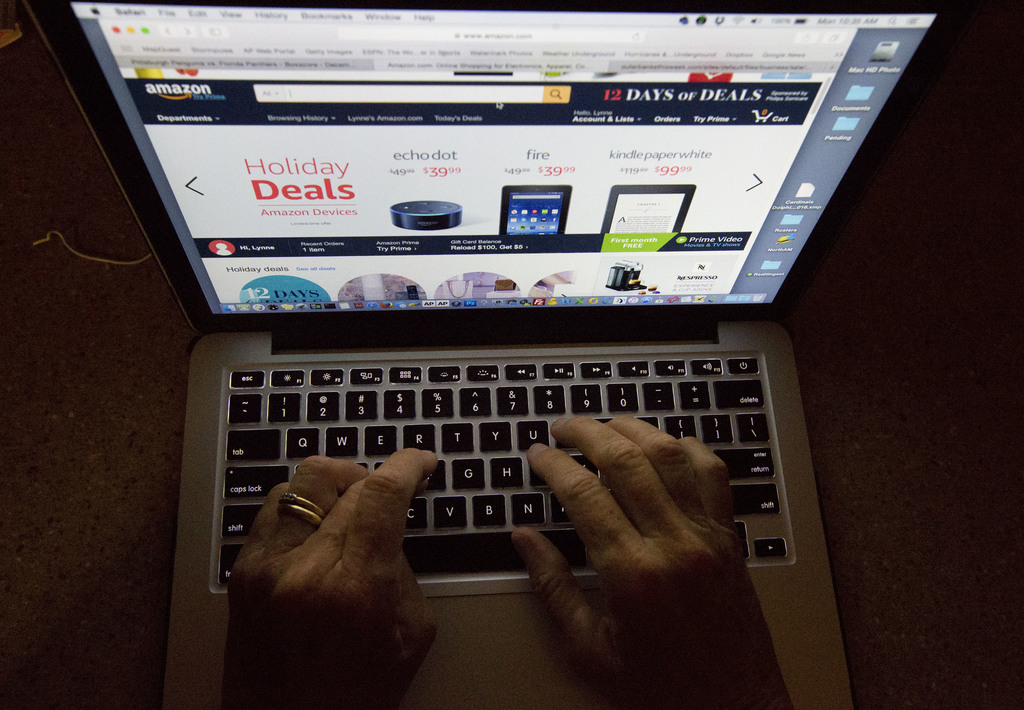 ATLANTA (AP) — Forget ordering online weeks in advance or dashing out to the drug store for a gift card on Christmas Eve. Procrastinating holiday shoppers are finding a haven online as retailers ramp up expedited shipping and same-day delivery services.

Far from discouraging last-minute online shoppers, retailers are actually courting them. Amazon is offering a "Procrastinator's Delight" special. Clothing retailer Madewell proclaims on its website that "procrastinators get the best deals" — 25 percent off everything, with orders as late as noon Thursday for holiday deliveries.

It's a far cry from 2013, when Amazon and package deliverers misjudged demand and delivered some holiday packages after Christmas . Since then, the Seattle company has added warehouses to be closer to customers. It has also leased jets and trucks to get packages delivered on time — even last-minute orders. Package carriers such as FedEx and UPS have also increased staffing and hired outside contractors for the holiday season.

"So many people are shopping online because it's easier," said Sucharita Mulpuru, chief retail strategist for the ShopTalk retail conference. "They're waiting for last minute because nobody is encouraging them to shop earlier."

If you're an online shopper in the days leading up to Christmas and Hanukkah, be ready to forgo free shipping and shell out for expedited service. Look for sites that offer detailed shipping information. And check where the package is coming from — if it's shipping from China or the U.K., you won't get it in time.

But the extra cost and vigilance is worth it to those seeking to avoid the hassles of jam-packed stores, crowded parking lots and frenzied crowds.

Laura Curtis turned to expedited two-day shopping from Etsy and elsewhere when she realized she needed more gifts for her nieces and nephews.

"I'm usually way done by now," said the writer from Mt. Kisco, New York. But she said she has faith that she'll get her packages on time. "Our FedEx guy is really reliable."

Although a union warned that Amazon might not be able to retain enough pilots under contract to deliver packages through its new airline shipping service, Prime Air, Amazon said it doesn't expect any delays.

The number of holiday packages has been rising each year as more people shop online. Research firm comScore predicts online shopping during the November and December holiday period will rise as much as 19 percent from last year to $81 billion. That compares with an expected 3.6 percent rise in overall shopping during the same period to $656 billion, according to the National Retail Federation, an industry trade group.

That means many more packages each year. UPS predicts global delivery volume during the holidays will rise 14 percent from last year to about 700 million packages. FedEx expects volume to rise about 10 percent.

Meanwhile, the number of services for last-minute online orders keeps growing. Amazon has been expanding its Prime Now same-day delivery service, adding nine cities to reach 31 this year. It is using local delivery service providers and regular drivers as on-demand messengers. The service is catering to last-minute shoppers by offering a "Procrastinator's Delight" program that will deliver products up until 11:59 p.m. on Christmas Eve. PetSmart is offering same-day delivery through startup Deliv. Uber is using its network of contract drivers for same-day delivery of goods for small businesses in New York, San Francisco and Chicago.

In addition, Amazon now lets people subscribe to its regular $99-a-year Prime program, which offers free two-day shipping, on a month-by-month basis. That means shoppers can sign up in December to take advantage of free two-day shipping and have the option of canceling the next month.

All this could lead to a rush in last-minute online deliveries.

ShopTalk's Mulpuru said she received a FedEx package in an unmarked van rather than a regular FedEx truck, a sign FedEx could be adding outside help for some deliveries. (FedEx confirmed it temporarily rents vehicles to accommodate increased package volume during the holidays.)

"This year the demand must have been really high," she said. "It's only going to get busier."

Prime's growth is estimated to be 50 percent over last year, and most of that growth happens during the holiday season, she said.

"Consumers are getting frustrated by store shopping," she said. "If you need something by a certain date, it becomes really easy to sign on to Amazon Prime."

Matthew Hall, a student in Denton, Texas, plans to take advantage of his student discounted-Prime membership and pick up movies and coffee-related items for his parents online.

"Shopping online is easier than just walking up and down the aisles, thinking 'Oh, they might like this," he said. "If I'm online I can scroll through pages of stuff without having to worry about, 'Oh, I should have grabbed that,'" he said.

Expedited shipping is a must, he added.

"I'm cutting it pretty close to the wire," he said. "I plan on doing everything two-day delivery if it's available. If not, I'm just not going to buy that."

Favian Quesada, a graphic designer at a TV station in Tyler, Texas, plans to rely on one-day shopping on Amazon because he's waiting until he gets paid Friday, just two days before Christmas. He said he's confident that things will get to him on time because online delivery has gotten much better over the years.

What if packages get delayed?

"I understand it's busy this time of year, and it's my fault for ordering last minute," he said. "If it doesn't get here on time, it will get here when it gets here. Holiday is not about presents, it's about hanging out with family."