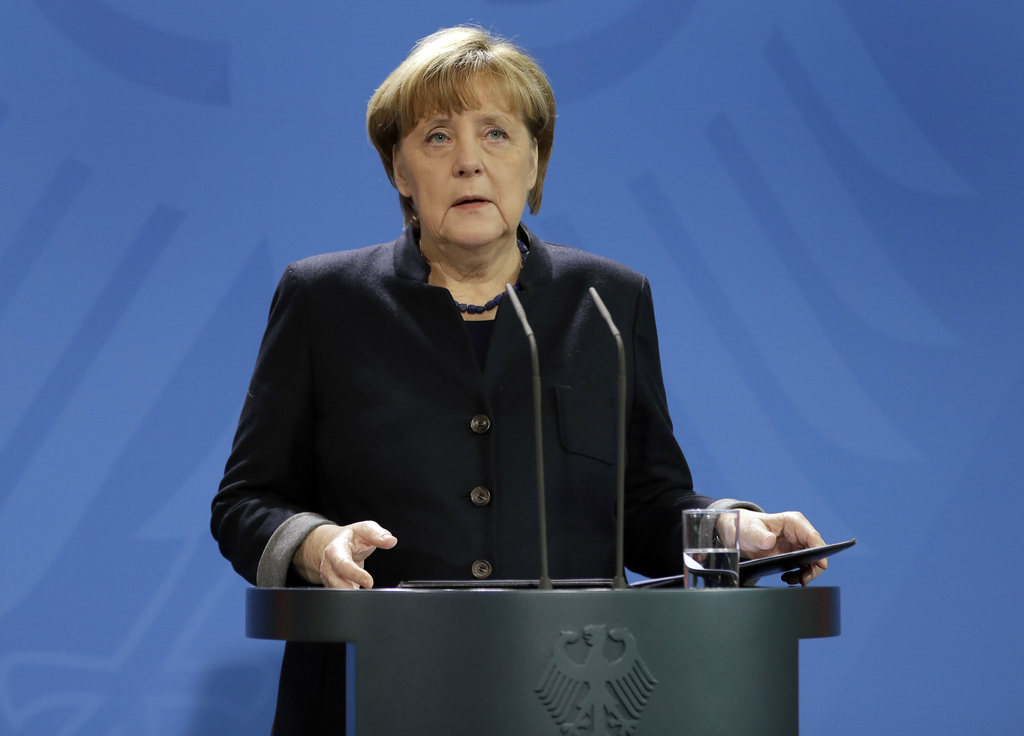 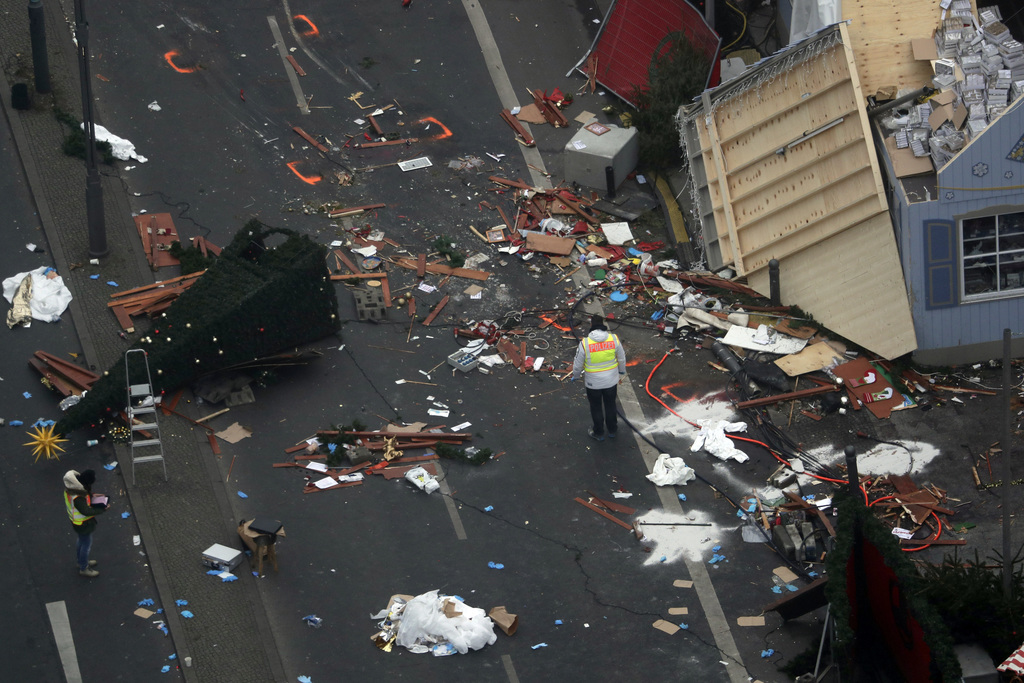 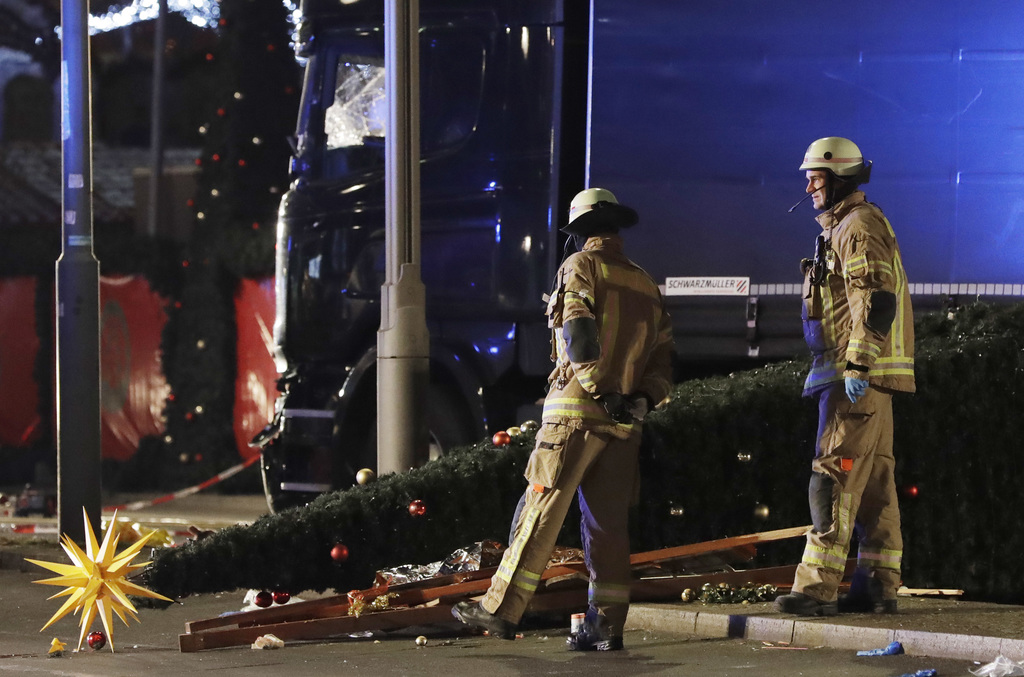 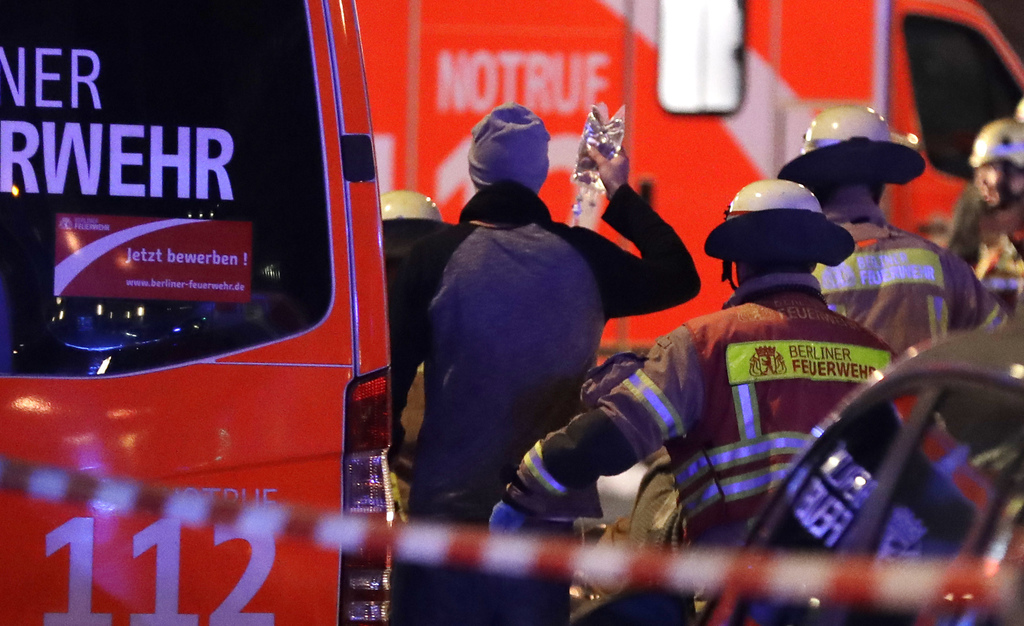 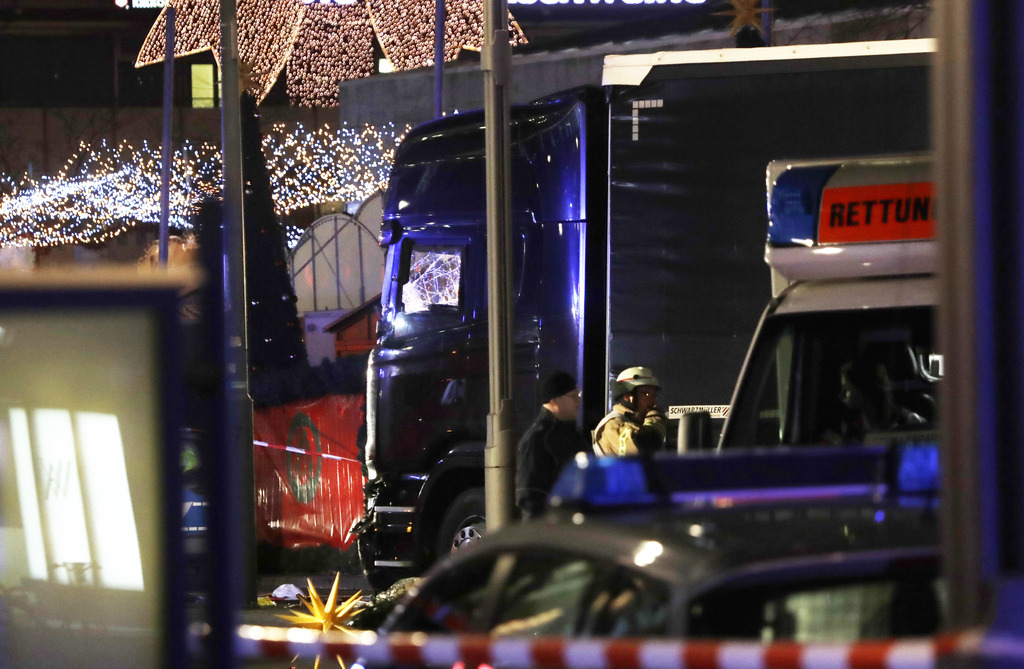 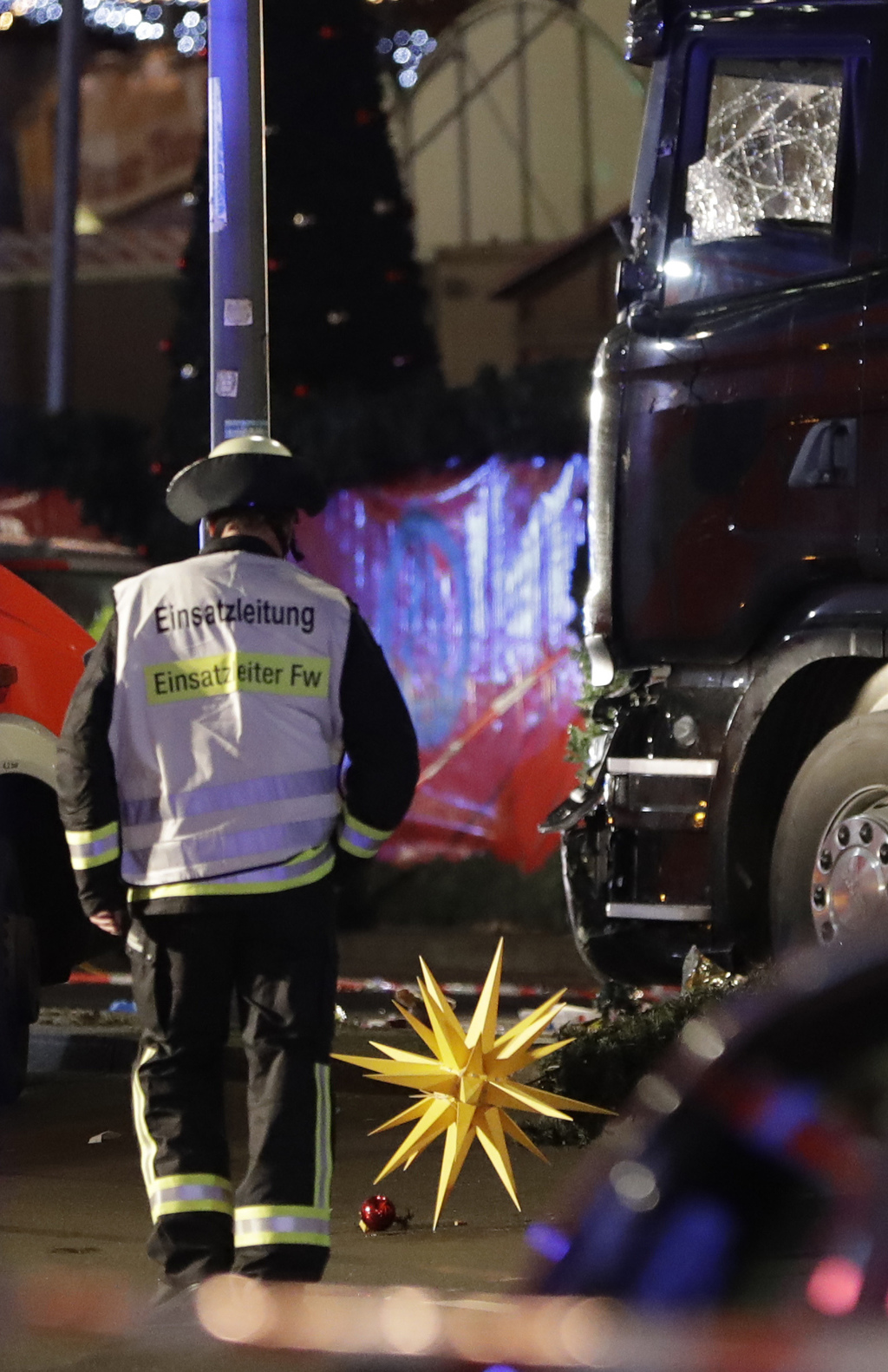 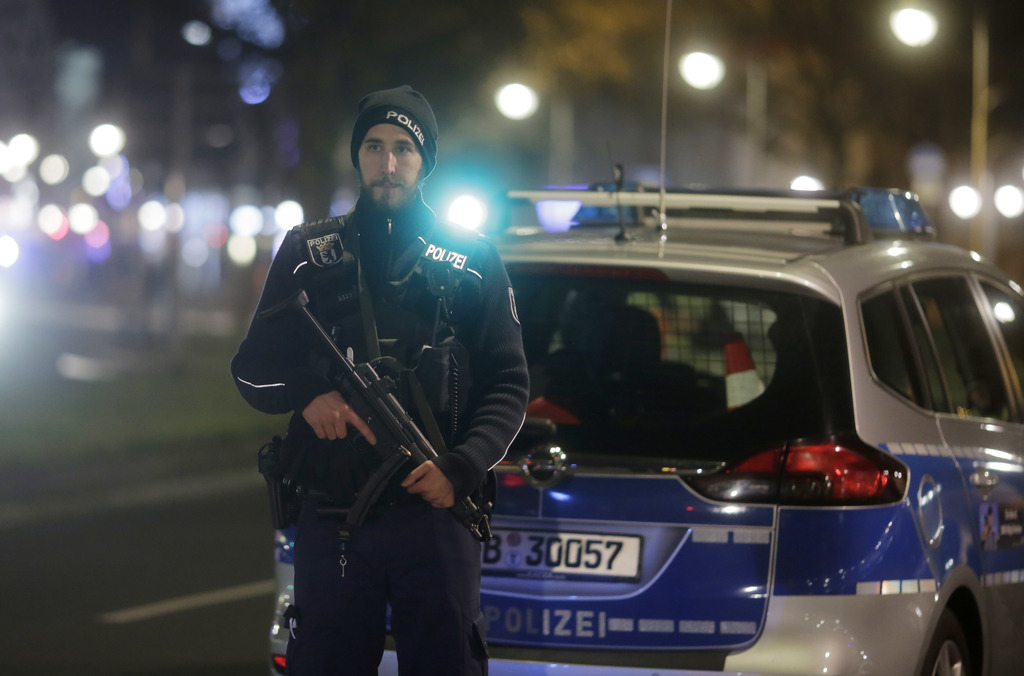 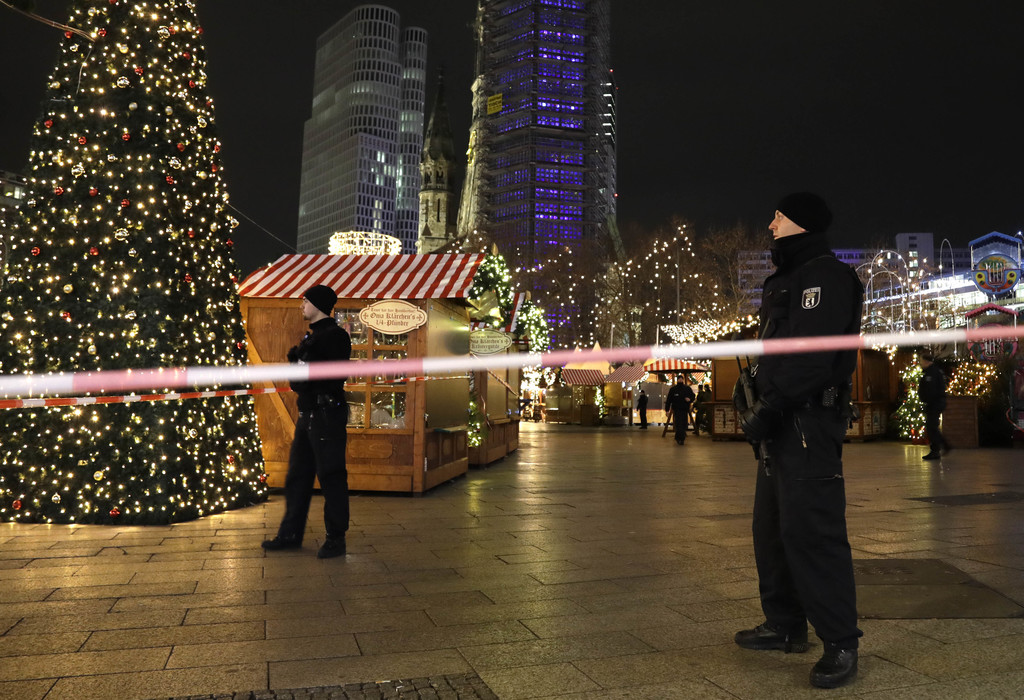 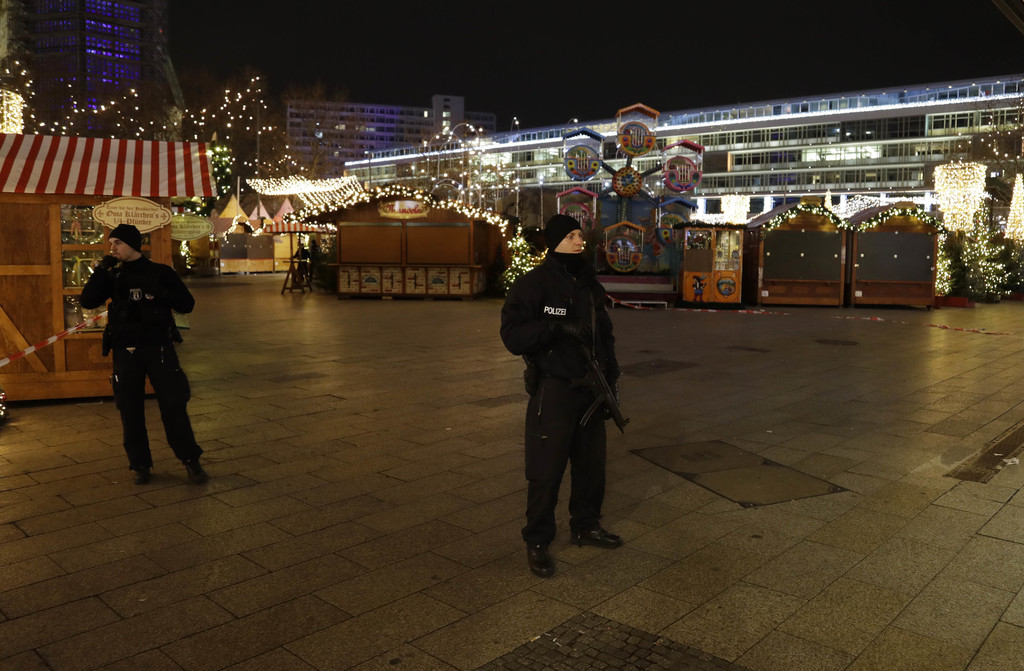 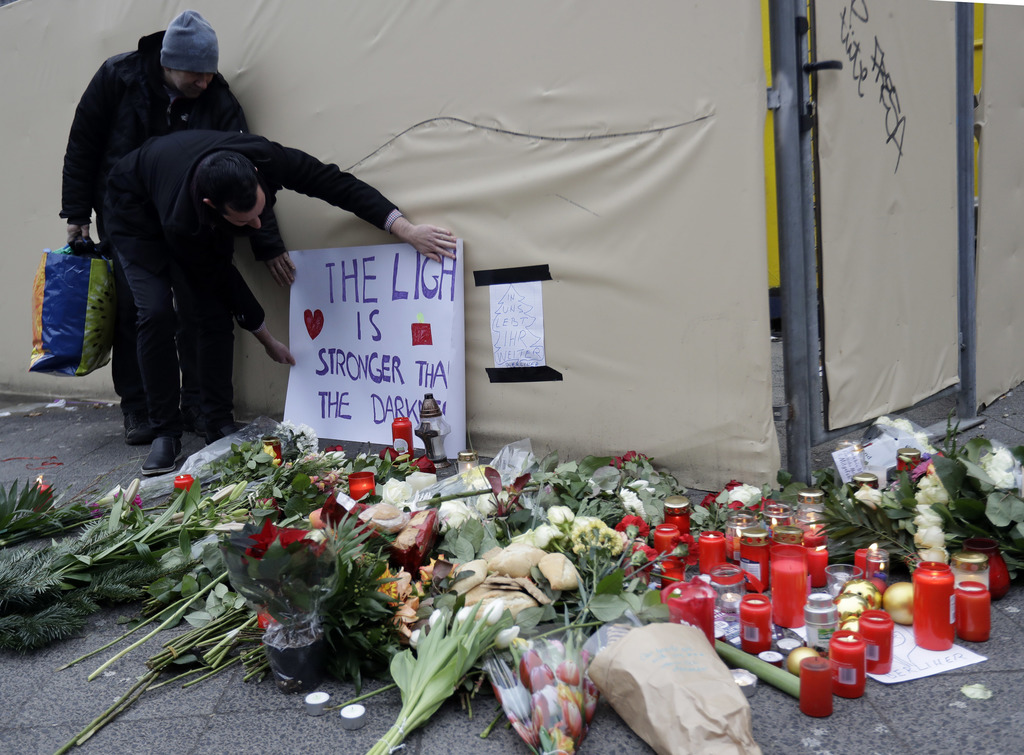 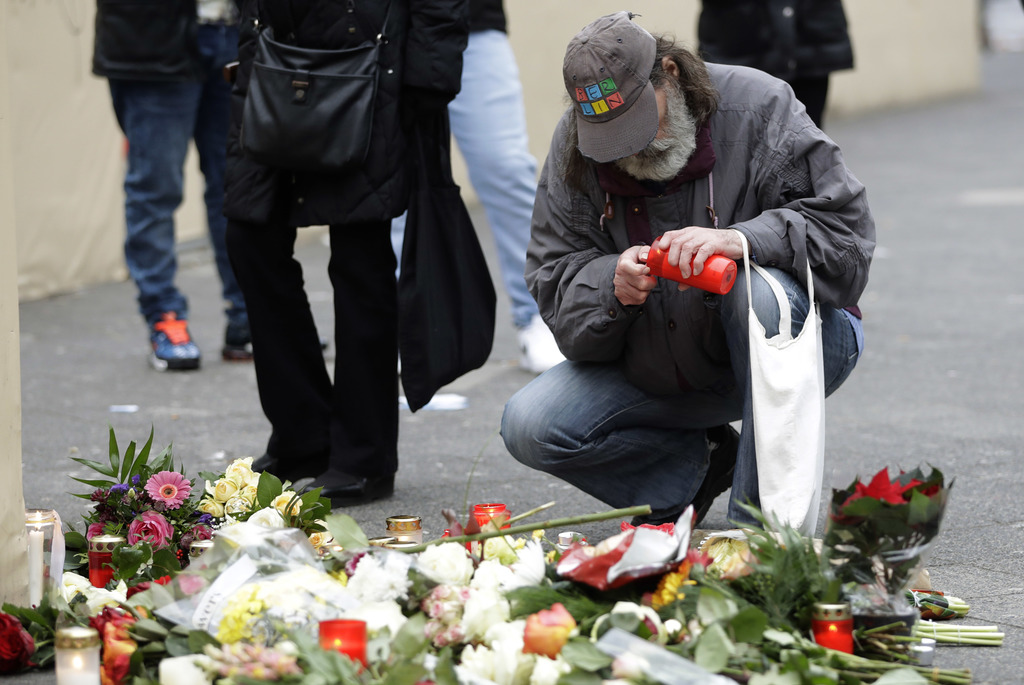 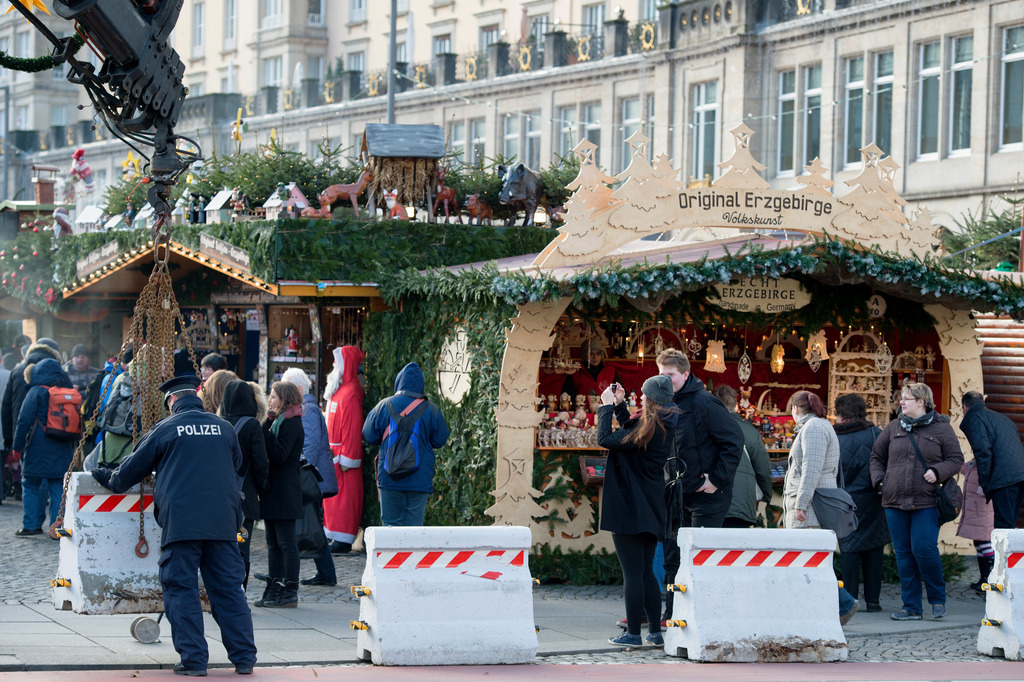 Nearly 50 people were injured when a truck plowed into a popular Christmas market filled with tourists and locals outside the Kaiser Wilhelm Memorial Church near Berlin's Zoo station late Monday.

"There is still a lot that we don't know about this act with sufficient certainty," Merkel told reporters in Berlin, in her first personal statement following the incident. "But we must, as things stand, assume it was a terrorist attack."

Police, too, said that the truck appeared to have been driven intentionally. So far, no group has claimed responsibility.

Authorities arrested a man about 2 kilometers (1½ miles) from the crash site on suspicion of having been at the wheel of the truck.

Numerous German media reported that the suspect was a Pakistani citizen. Footage showed the suspect, his head covered in a white sheet, being pushed into a police car shortly after the attack.

Police declined to comment on the reports, referring questions to federal prosecutors who said they would hold a news conference Tuesday afternoon. But Merkel, who has been criticized for allowing in large numbers of migrants, addressed head-on the possibility that an asylum-seeker was responsible.

"I know that it would be particularly hard for us all to bear if it were confirmed that a person committed this act who asked for protection and asylum in Germany," Merkel said. "This would be particularly sickening for the many, many Germans who work to help refugees every day and for the many people who really need our help and are making an effort to integrate in our country."

A spokesman for Berlin's office for refugee affairs said police conducted a large-scale search overnight at a large shelter for asylum-seekers at the city's now-defunct Tempelhof airport. Four men in their late 20s were questioned but nobody was arrested, Sascha Langenbach told The Associated Press.

Among the dead was a man in the truck, who succumbed as paramedics treated him, Berlin police spokesman Winfried Wenzel said. Police said later that the man was a Polish national, but didn't give further details of who he was or what happened to him.

The Polish owner of the truck said he feared the vehicle may have been hijacked. Ariel Zurawski said he last spoke with the driver, his cousin, around noon, and the driver told him he was in Berlin and scheduled to unload Tuesday morning. "They must have done something to my driver," he told TVN24.

Germany has not so far experienced any mass-casualty attacks by Islamic extremists, but has been increasingly wary since two attacks by asylum-seekers in the summer that were claimed by the Islamic State group. Five people were wounded in an ax rampage on a train near Wuerzburg and 15 in a bombing outside a bar in Ansbach, both in the southern state of Bavaria. Both attackers were killed.

Those attacks, and two others unrelated to Islamic extremism in the same weeklong period, contributed to tensions in Germany over the arrival last year of 890,000 migrants.

Far-right groups and a nationalist party seized on Monday's attack, blaming German Chancellor Angela Merkel for what had happened.

"Under the cloak of helping people Merkel has completely surrendered our domestic security," Frauke Petry, the co-chairwoman of the Alternative for Germany party, wrote.

Manfred Weber, a member of Merkel's conservative bloc and leader of the European Parliament's biggest political grouping, cautioned against sweeping verdicts but said it was important to ensure that extremists didn't enter the country.

U.S. President-elect Donald Trump said Islamic extremists must be "eradicated from the face of the earth" and pledged to carry out that mission with all "freedom-loving partners."

The attack came less than a month after the U.S. State Department warned that extremist groups including Islamic State and al-Qaida were focusing "on the upcoming holiday season and associated events" in Europe.

The Islamic State group and al-Qaida have both called on followers to use trucks in particular to attack crowds. On July 14, a truck plowed into Bastille Day revelers in the southern French city of Nice, killing 86 people. Islamic State claimed responsibility for that attack, which was carried out by a Tunisian living in France.

Merkel said Monday's attack would not cause Germany to live in fear.

"Even if it's difficult at this hour we will find the strength to live life the way we want to live it in Germany. Free, together and openly," she said

Associated Press writers David Rising and Geir Moulson in Berlin and Angela Charlton in Paris contributed to this report.