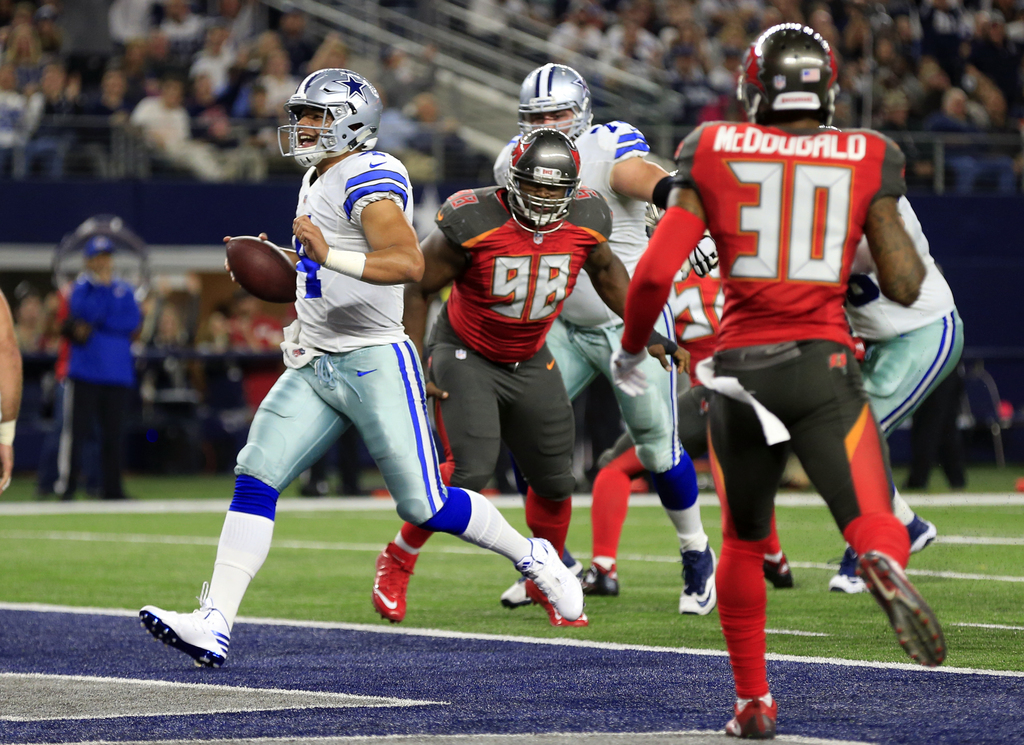 The Dallas quarterback is a little more low-key, happy to let his most accurate game as Cowboys quarterback do the talking coming off his worst game as a pro.

And now Prescott puts his focus on an NFC East title and the top seed in the conference after once again quieting talk about backup Tony Romo.

"I think he's shown that he can do what you hope that a quarterback can do, and that's come back from when he didn't play as well as he wanted to play," owner and general manager Jerry Jones said after Sunday's 26-20 win over the Tampa Bay Buccaneers.

"And I think that ought to show you that he's sure not worried about anything that's being said about him. He's going to go to work and go to town, and we can quit worrying about that kind of stuff."

Not that he was worried, but Elliott won't get fined by the NFL for jumping into one of the red kettles beyond the end zone after a short touchdown run.

The league's leading rusher, who was expecting a fine, said on Twitter that he still planned to give money to the Salvation Army, which had a 61 percent increase in donations in the hours after Elliott's creative celebration.

The made-for-TV moment overshadowed Prescott's 32-of-36 showing, and his 11th game without an interception against a defense that a week earlier picked off New Orleans' Drew Brees three times.

"I don't really pay attention to the noise," said Prescott , who had 279 yards passing. "I couldn't tell you much that was said all week. That's the only thing in my mind, to respond to last week's performance. 'He said, she said,' doesn't affect me."

Elliott also overshadowed a Dallas defense that held Tampa Bay to one first down in five possessions in the fourth quarter, when Dallas rallied with three of Dan Bailey's four field goals.

The Cowboys kept a two-game cushion over New York in the division a week after the Giants ended their 11-game winning streak.

Instead of being just one game up on the team that swept them in the regular season, the Cowboys (12-2) are a win or a New York loss or tie from their second division title in three years and their first No. 1 seed since 2007, when Romo led them to a 13-3 record.

Dallas finishes the regular season with a Monday night home game against Detroit and a visit to fading Philadelphia.

Then it's on to the playoffs for Prescott, who is set to become the first rookie quarterback to start in the postseason for Dallas.

"He's someone who's handled every situation he's come across since he's been with us very, very well," coach Jason Garrett said.

Elliott wasn't really worried about his road roommate after Prescott completed less than 50 percent of his passes and looked generally uncomfortable in a 10-7 loss to the Giants, the only team to beat Dallas this season.

While Prescott didn't have a touchdown pass, one of his best throws against the Bucs came on the run when he hit Brice Butler in stride on the sideline at the 2.