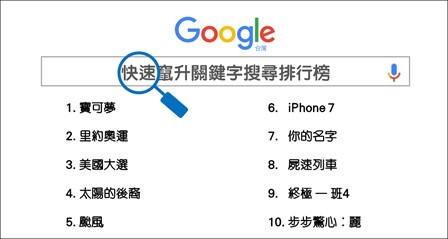 Google Taiwan just released its annual "2016 Year in Search" in which the popular mobile game Pokemon GO took the crown in overall trending searches at Google Taiwan, while U.S. President-elect Donald Trump and Taiwan's first female president Tsai Ing-wen led the list of the most trending politicians thanks to the elections.

The 2016 list was a year full of surprises, with many historic and unforgettable moments from Brexit and the massive terrorist attacks in Europe to Trump's election win that kept us searching. Google Taiwan revealed the most trending Chinese language keyword searches of the year on Wednesday. To start diving into the top trending terms of the year, check out the list below:

Google Taiwan's Year in Search recaps the terms most searched over the past year. Entertainment-related searches remain prominent on the list thanks to motion pictures and games, which were apparently high on the list of priorities for many Taiwanese. Among them, Pokemon Go, the location-based augmented reality game developed by Niantic, surged to grab first place among the year's most searched keywords.

The international sporting event the Rio Olympics and the U.S. presidential election also made it to the top three this year in Taiwan.

It's worth mentioning that Korean dramas and movies took up three of the top ten spots of which "Descendants of the Sun," a 2016 South Korean television series starring Song Joong-ki and Song Hye-kyo ranked No. 4.

As for Google Taiwan's list of most trending people for 2016, Trump grabbed the top spot, followed by Chou Tsu-yu, Song Joong-ki of the South Korean drama Descendants of the Sun, Michael Huang, and Tsai Ing-wen.

On the other hand, a teenage Taiwanese Kpop singer, Chou Tsu-yu, placed second on the list of the ten most trending people, after appearing in a video making an apology for holding up a small Taiwanese flag on a South Korean TV show that aired in late 2015 during which she was said to have been forced to state that she is a "Chinese national," after immense public outcry from Chinese netizens.

Michael Huang, a China-based Taiwanese entertainer, has become one of the most searched names at Google Taiwan after he stirred up a firestorm among Taiwanese netizens by accusing Chou of being a supporter of Taiwan independence for holding a small flag of the Republic of China on a Korean TV show.

The most trending terms of the year were collected by Google Taiwan during the period between December 2015 and November 2016.