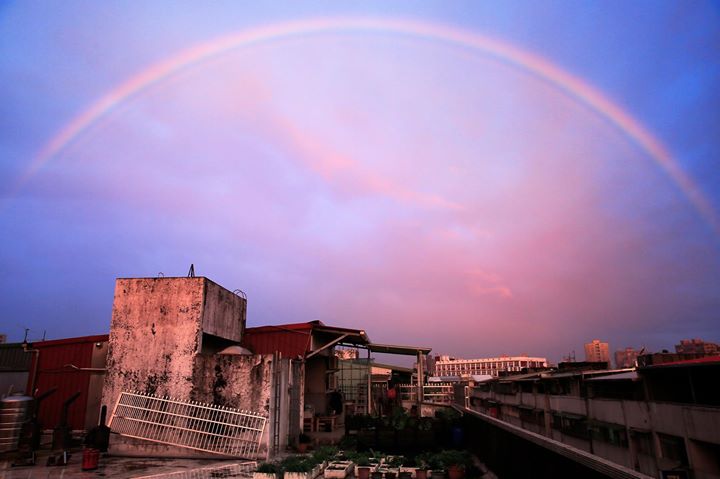 A day after a music festival was staged in front of the Presidential Office Building in Taipei Saturday which drew over 250,000 people, Taiwanese netizens posted photos of rainbows spotted in Taoyuan and Taipei and commented that it was a sign of a favorable outcome for their cause.

On Saturday, dozens of popular singers, including Denise Ho from Hong Kong, Sandee Chan, Freya Lim and Ailing Tai, appeared on stage and sang to the crowd, while Pop diva Jolin Tsai led nearly a hundred entertainers and stars in a recorded message at a music festival held that day to support same-sex marriage,

The next day, many Taiwanese netizens posted images of full rainbows on the music event's Facebook page, which had appeared over parts of Taoyuan and Taipei during a break in the rain that afternoon. Facebook user Dennis Lai posted the following image and said: After the rain stopped, the skies have cleared and a rainbow has appeared. Support marriage equality, oppose special bill.

The special bill he is referring to a special civil partnership bill same-sex marriage opponents.

"Today, although it was overcast, a rainbow appeared. The final stretch in the journey is the most difficult, but please do not give up." There were mixed reactions to the image posted by FB user 劉班: One user said, "Rainbow bully! The rainbow doesn't care if we want to see it or not, there will be a referendum!" In response, another user said, "The rainbow is here and the people will decide."