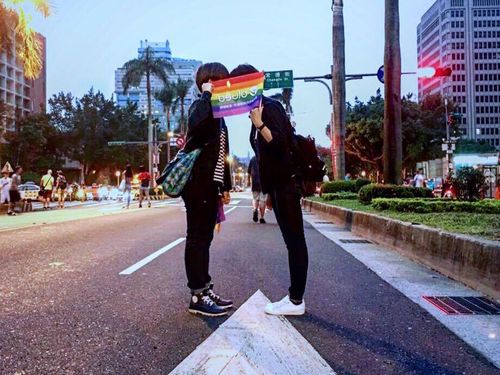 A Chinese student in Taipei said Saturday that she has been able to come forward openly as a gay person and a supporter of same-sex marriage since she came to Taiwan, because it is a "land of enlightenment" in terms of civil liberties.

Speaking to CNA at a rally in support of same-sex marriage, the woman who asked to be called Su He (蘇河) said she has been living her dream since she came to Taiwan as a student five years ago.

Su, who was at the rally with her Taiwanese partner, said she has been studying mass communication, observing press freedom, and living as an openly gay person in Taiwan without fear of recrimination, which would have been unlikely in China.

She said that before she came to Taiwan, she and all the other LGBT people she knew in her community in China had been "hiding in their own corners," unwilling to come out to fight for their rights.

"We thought there was no need to stand up for our rights as long as we could get by," Su said.

For a long while after she came to Taiwan, Su said, she did not have the courage to do things like participating in gay-rights rallies.

It was not until this year, when the rallies for the legalization of same-sex marriage drew large crowds in Taiwan that she began joining the movement, Su said.

Since then, she has come to view Taiwan as a "land of enlightenment" because of its civil liberties, she said.

Su said she would like to remain in Taiwan for further post-graduate studies, mainly because she was not sure how long it would take before people in China would be allowed to "speak their minds."

Looking back on her progress from a closet lesbian to an open advocate of same-sex marriage, Su said her first public gesture was in October when she joined the gay pride parade in Taipei.

But even after that, she balked at attending rallies near the Legislature in support of same-sex marriage, she said. It was not until she saw social media posts by her schoolmates calling on heterosexuals to support legal rights for the LGBT community that she decided to come forward, she said.

Su said that on Nov. 28, for the first time she joined a rally outside the Legislature, along with her Taiwanese partner, in support of a same-sex marriage bill.

Equal rights for gays and lesbians mean more than just marriage rights, she said. They also mean equality in terms of human rights, democracy and freedom. she said.

Su said that back in China, the only person she had told about her sexual orientation was her mother.

"My mom doesn't think I'm a freak, but she does not fully support me on that either," Su said.

She said many of her LGBT friends in China who had tried to come out to their families had suffered rejection.

Su said she thinks that parents of LGBT people, both in Taiwan and in China, who are willing to listen to other people's views on gay issues will move slowly from adamant opposition to at least a neutral position.

"And that would be progress," she added.

One the question of whether she would get married in Taiwan if the same-sex marriage bill passes, Su looked at her partner with a smile and said, "Yes."