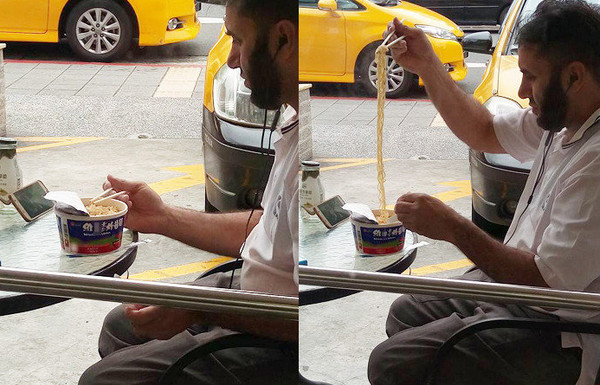 Pictures of a foreigner eating instant noodles in an unconventional way at a convenience store's outdoor dining area drew a lot of attention on social media.

A Facebook user found this foreigner preparing for WeiLih Meh Instant Noodle, the most beloved local instant noodles, by putting two seasoning packets into the bowl and poured hot water in it.

It doesn't sound like a wrong way to get the instant noodles ready, but it happened that this particular brand is meant to be prepared as dry noodles instead of noodles soup. So Taiwanese people almost always drain the noodles after soaking it in hot water, then adding the seasoning packet to the noodles. The dry seasoning packet is used separately for making soup in another bowl to go with the dry noodles. But some netizens went on the defensive and supported the way how that foreigner prepared for the noodles, saying they have also used the same way when they were kids.

American instant noodle aficionado Hans Lienesch, who runs a well-known blog “The Ramen Rater,” also made reviews on the popular instant noodles years ago. He also got confused during the process of getting the dry noodles ready first and making the soup later. He later published a re-review on the correct way of having the noodles after being corrected by Taiwanese netizens.