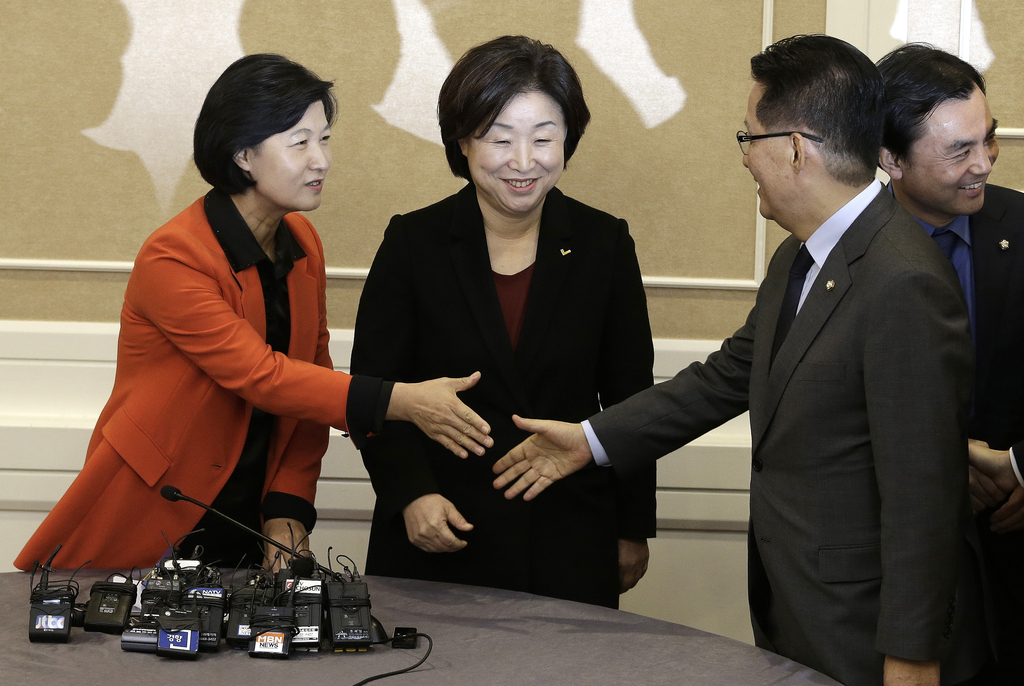 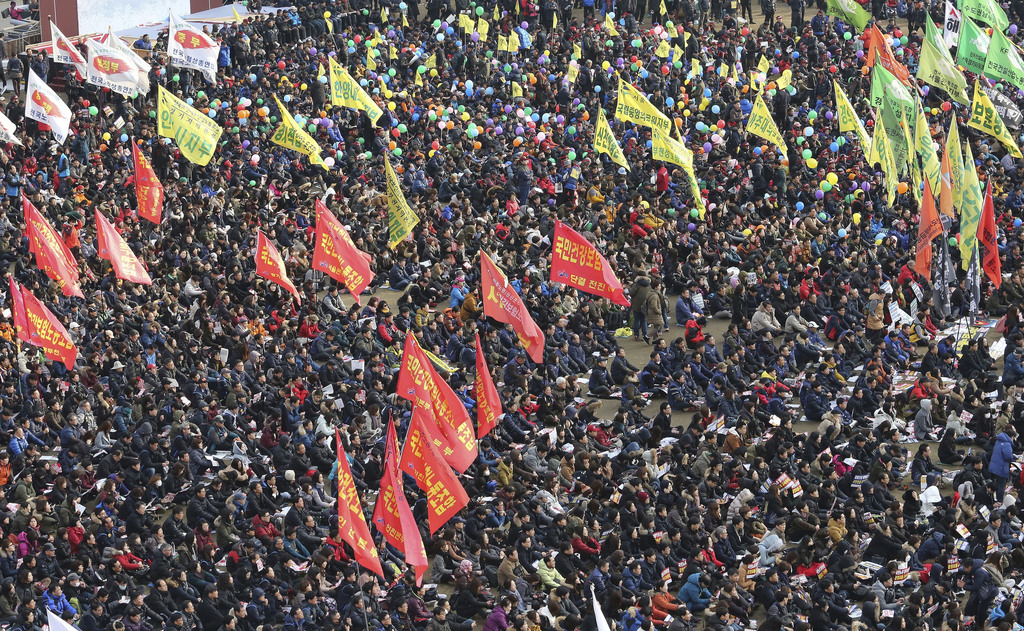 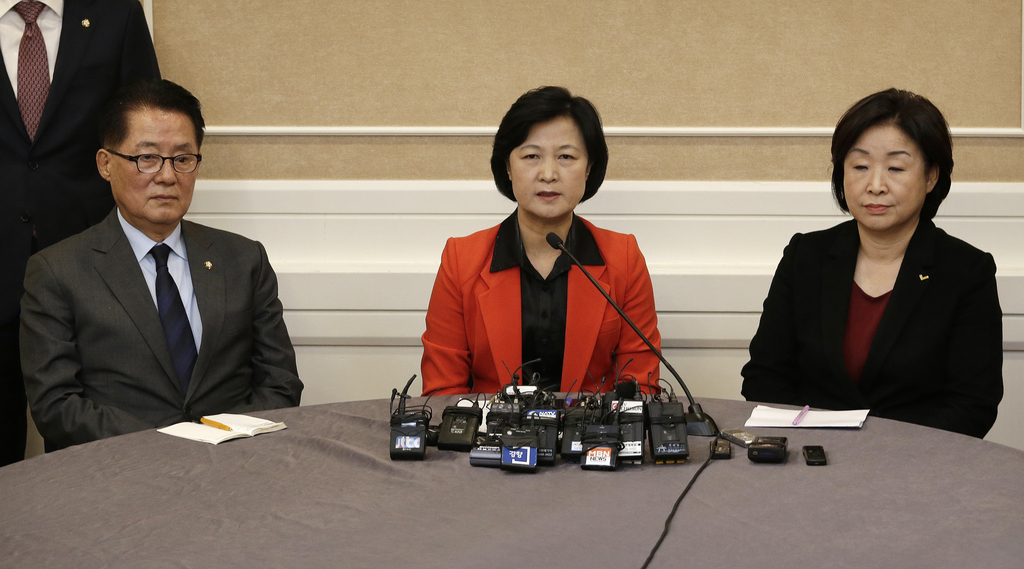 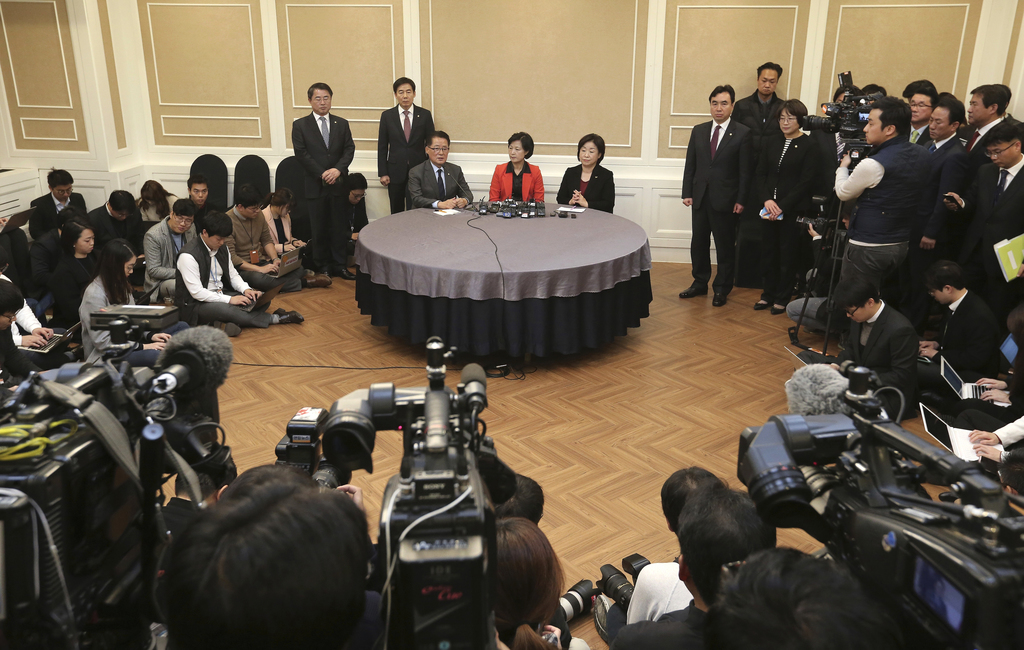 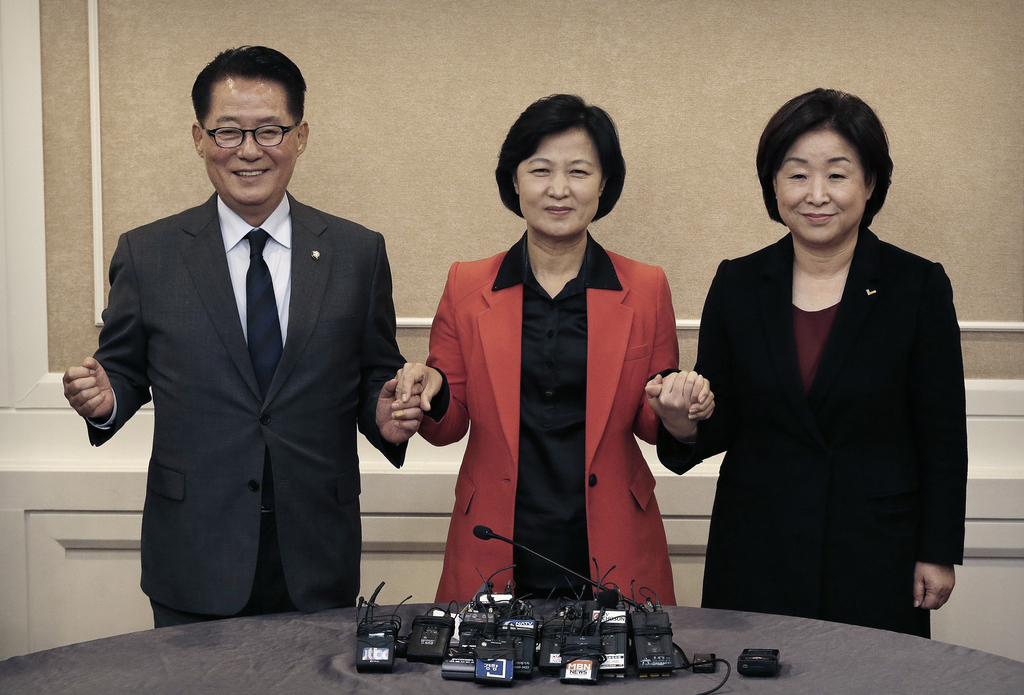 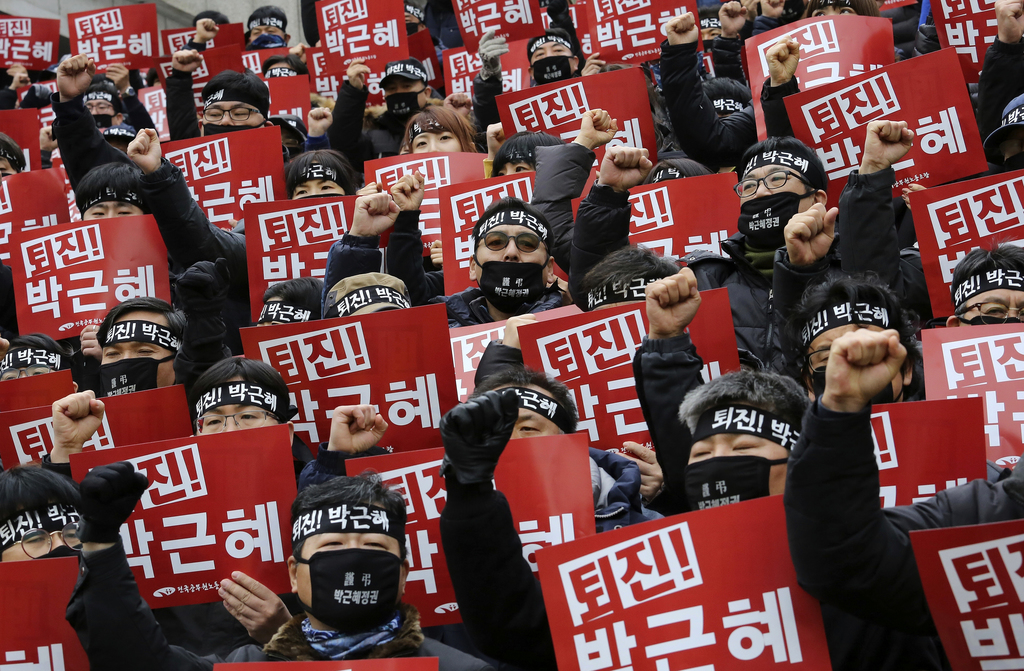 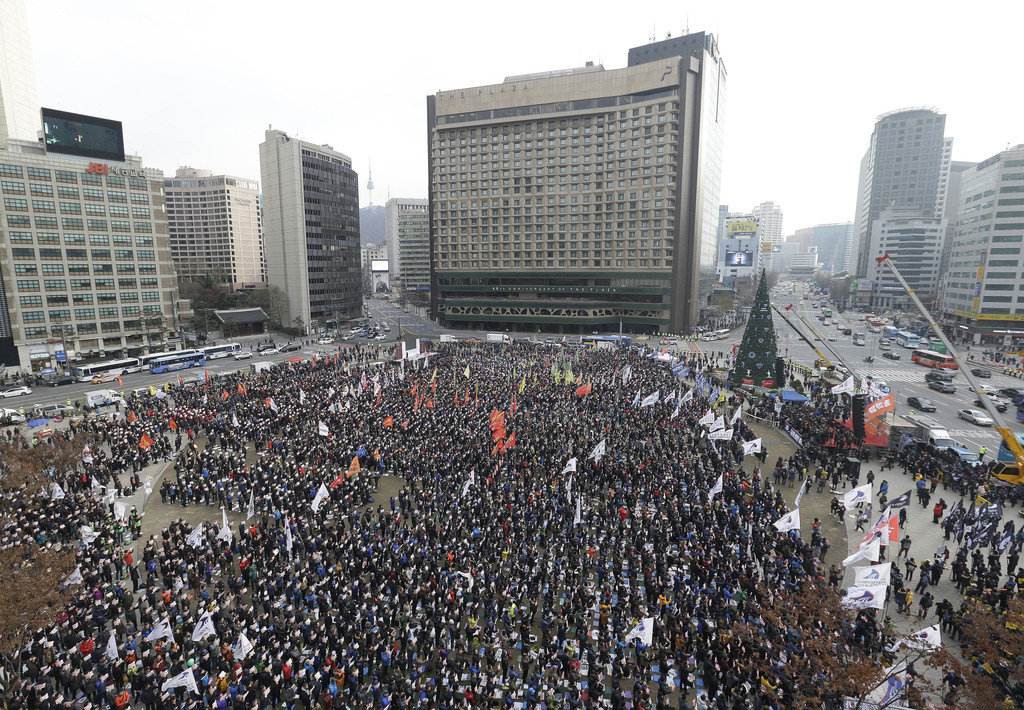 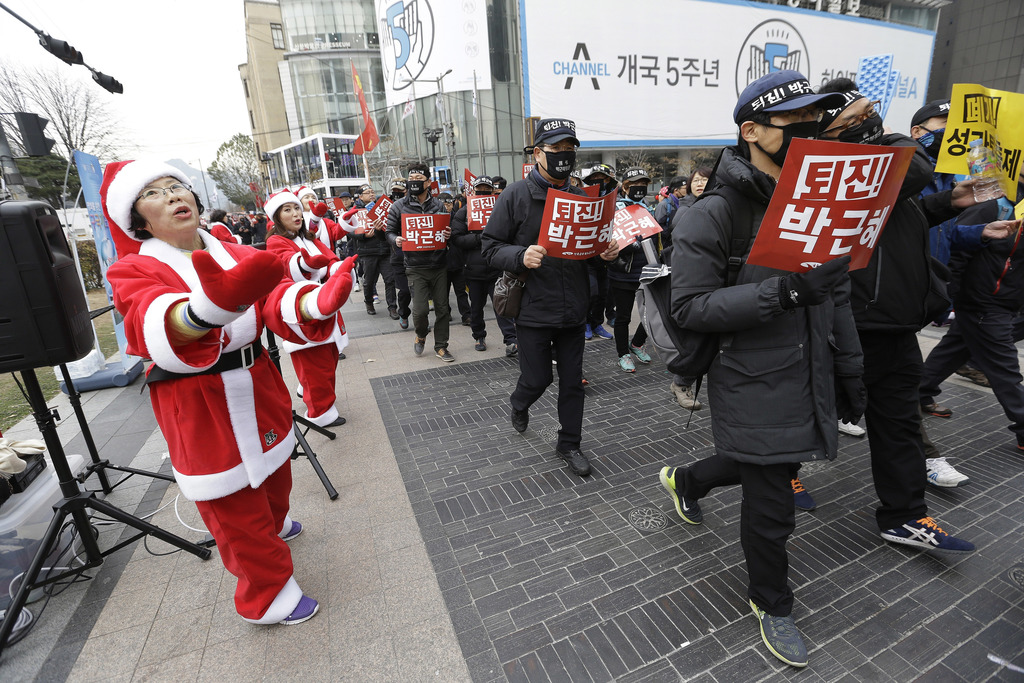 SEOUL, South Korea (AP) — South Korean President Park Geun-hye's conditional resignation offer appears to be causing cracks in what previously had been a strong push for her impeachment, with opponents now struggling to set a date for a vote to strip her of power.

Park offered Tuesday to leave office if parliament arranges a safe transfer of power, triggering an immediate backlash from opposition parties, which called the overture a stalling tactic to help the president navigate through a huge political scandal involving her shadowy confidante.

Leaders of the country's three main opposition parties met Wednesday and agreed to stick with their plan to try to vote on an impeachment motion as early as Friday. But they also said they'd meet again if that plan does not work, meaning they're bracing for the possibility that a Friday vote might not take place.

Much of their hesitation to pick a clear date is due to the fact that there are not enough opposition lawmakers to pass an impeachment through parliament, and they would need help from dissenters in Park's ruling Saenuri Party.

The three opposition parties and anti-Park independent lawmakers have a total of 172 seats in the 300-seat National Assembly. A passage of an impeachment motion requires at least 200 votes in favor. About 40 ruling party lawmakers had initially expressed their willingness to vote to oust Park.

But after Park's offer Tuesday, made in an address to the nation, anti-Park lawmakers met and agreed it would be best for Park to resign in April, after the installation of a neutral Cabinet that can help ensure a stable power transfer until a new president is elected, according to the office of Hwang Young-cheul, one of the lawmakers who attended the meeting.

They said they would still take part in a possible impeachment vote on Dec. 9 if details for an April resignation aren't worked out through negotiations, Hwang's office said.

Opposition parties have previously said a vote on Park's impeachment would take place either on Friday or Dec. 9, because parliamentary plenary sessions are already scheduled on those days.

"It's true that some cracks have taken place at anti-Park forces in the Saenuri Party after her speech," said an official at the main opposition Democratic Party, formerly known by its Korean-language name, Minjoo.

The official, who requested anonymity because he wasn't authorized to speak to the media, said opposition parties are using unofficial, backroom channels to see if they can still secure enough Saenuri lawmakers who would align with their impeachment drive.

If impeached, Park's presidential powers would be suspended until the Constitutional Court makes a ruling on her fate. The court would have 180 days to deliberate.

Park, in her Tuesday speech, continued to deny accusations by prosecutors that she colluded in the criminal activities of her longtime friend Choi Soon-sil, who, despite having no official role in government, allegedly had a say in policy decisions and exploited her presidential ties to bully companies into giving large sums of money to businesses and foundations that Choi controlled.

Prosecutors have indicted Choi, two ex-presidential officials and a music video director known as a Choi associate for extortion, leaking confidential documents and other charges.

The scandal has sparked mass protests every Saturday in Seoul. On Wednesday, about 30,000 anti-Park demonstrators gathered in the city's downtown area, according to protest organizers.

Park, who has immunity from prosecution while in office, has refused to meet with prosecutors. Her lawyer says the prosecutors' accusations are groundless.

Park is the daughter of late dictator Park Chung-hee, whose 18-year rule ended after he was gunned down by his own intelligence chief in 1979.