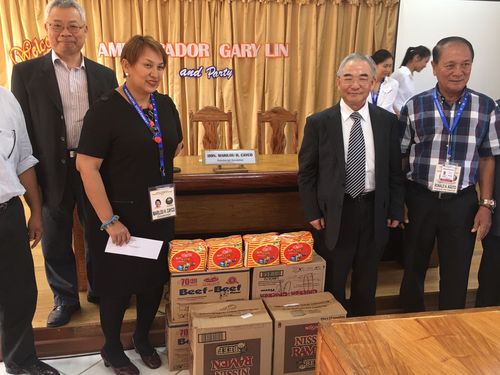 Taiwan has donated one million Philippine pesos (US$20,000) as well as materials to Batanes, the northernmost province of the Philippines, for post-typhoon reconstruction.

Gary Song-huann Lin (林松煥), Taiwan's representative to the Philippines, made the donation to Batanes Governor Marilou Cayco at a ceremony held at the provincial government square Wednesday.

Fishery disputes between Taiwan and the Philippines have often erupted in waters around Batanes over the past few years.

A 2013 incident in which Guang Ta Hsing No. 28, a Taiwanese fishing boat, was strafed by Philippine coast guard personnel, resulting in one death, plunged bilateral relations to a new low.

However, the number of fishery disputes was markedly reduced after Taipei and Manila signed a fishery agreement in November 2015.

Lin noted that Taiwanese fishing vessels often sail to Batanes for supplies and maintenance during the March-June fishing season each year and receive friendly assistance from the people there.

It is time to show humanitarian concern to help with reconstruction after Typhoon Meranti hit the archipelago province hard in September, Lin said.

Cayco expressed appreciation, saying that the move demonstrates the solid friendship between the peoples of the two sides.

(By Emerson Lim and Lilian Wu)