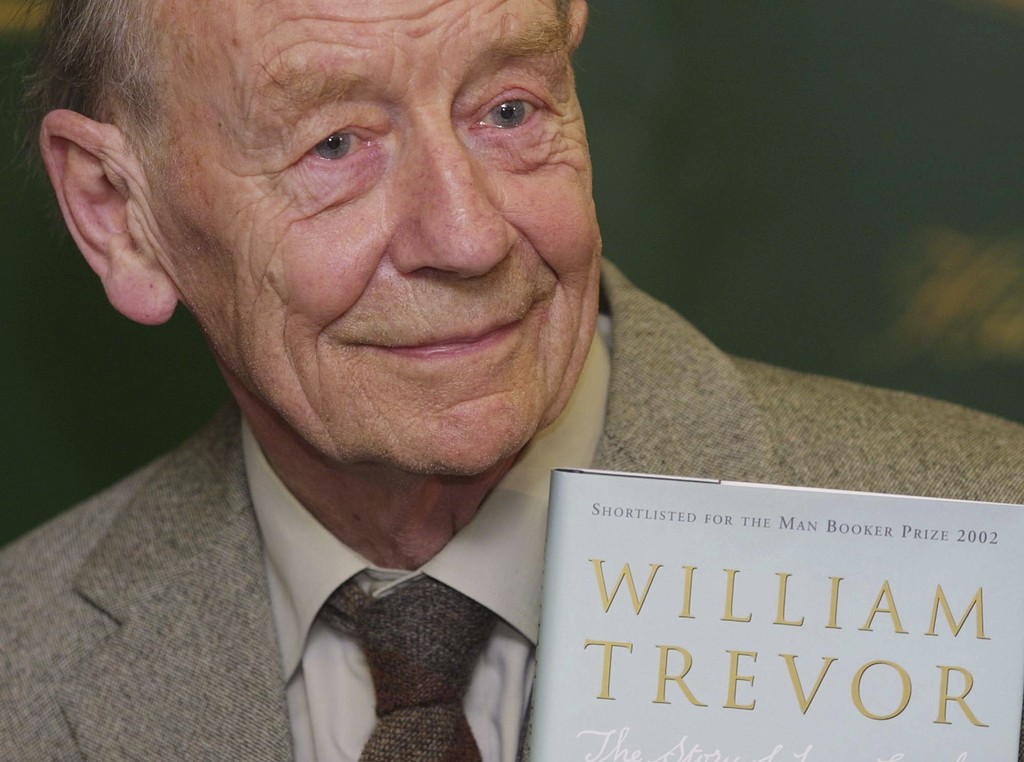 LONDON (AP) — Irish novelist and playwright William Trevor, a master of short stories that often explored life's disappointments, has died at the age of 88 in his adopted English home, his publisher announced Monday.

Trevor set his tales mainly in his native Ireland or in England, where he had lived since graduating from Trinity College Dublin in 1952. He won one of Britain's top literary prizes, the Whitbread, three times; was short-listed four times for the Booker Prize, most recently in 2002 for "The Story of Lucy Gault"; and was a perennial object of speculation as a potential Nobel literature laureate.

But Trevor studiously avoided the spotlight, even in his own works, where his voice melted away into the inner worlds of his often scarred, socially isolated protagonists.

"My fiction may, now and again, illuminate aspects of the human condition, but I do not consciously set out to do so," Trevor told one interviewer. "I am a storyteller."

Graham Greene praised Trevor's 1973 collection "Angels at the Ritz" as the best set of short stories since "Dubliners," James Joyce's 1914 collection. While preferring the short story form, Trevor also was a novelist, playwright and TV dramatist.

He told The Guardian newspaper in 2009 that he considered short stories the best vehicle for studying character.

"You can take a relationship and almost photograph it. And there it is," he said.

"Often that relationship can get lost in the bigger shape of the novel. I like to isolate it and really look at the characters."

Born William Trevor Cox on May 24, 1928, in Mitchelstown, County Cork, Trevor's themes often seemed to reflect the difficulties of his early years, growing up with parents stuck in an unhappy marriage.

"It wasn't so much that they quarreled; I never heard my father shouting or anything like that. They just simply didn't get on. There was no respect, nothing," he told The Guardian.

"I've always thought that something actually happened, the way that quite often in a marriage or a relationship something happens, and nobody knows because it's kept away from the rest of the world, because there's shame or something. There's a big question mark."

His family was Protestant in a newly independent nation dominated by the Roman Catholic Church, a minority regarded as "strangers and visitors" as he put it in the short story "The News From Ireland."

Trevor's own marriage to his Trinity College sweetheart Jane Ryan in 1952 was happy and endured, but the gloominess of his childhood stuck to him. His characters tended not to triumph over their problems.

"If you take away the sadness from life itself," he told The Guardian, "then you are taking away a big and a good thing, because to be sad is rather like to be guilty. They both have a very bad press, but in point of fact, guilt is not as terrible a position as it is made out to be. People should feel guilty sometimes. I've written a lot about guilt. I think that it can be something that really renews people."

Ireland's depressed economy drove Trevor to move to England in 1952, where initially he taught art and produced sculptures. His first novel published in 1958, "A Standard of Behaviour," won little attention and was later disowned by the author.

Moving to London in 1960 to work in an advertising agency gave him enough free time to produce a second novel, "The Old Boys," which won the Hawthornden Prize, honoring the "best work of imaginative literature." He adapted the play for television and the stage, a success that inspired him to move his family to rural Devon in southwest England.

Trevor flourished in the theater and television, and in 1973 he had three plays staged in London.

He produced all of his stories on blue paper — a habit from his ad agency days — on a manual typewriter, followed by much revision.

"It's like cutting a film," he said in a BBC interview.

"One can open this book, pick a paragraph at random, and imagine dozens of ways Trevor could have written it less effectively and did not, ways he could have added, or failed to excise, a word or phrase that would have made it easier, more explicit, but less focused in its power to disturb or to force recognition," Murtagh wrote.

Trevor won many honors, including the Benson Medal of the Royal Society of Literature for "Angels at the Ritz and Other Stories"; the Allied Irish Bank Prize for literature and the Heinemann Award for fiction in 1976; and the Whitbread Prize three times: in 1978 for "The Children of Dynmouth," in 1983 for "Fools of Fortune" and in 1994 for "Felicia's Journey." The latter was made into a 1999 film starring Bob Hoskins.

Although he remained an Irish citizen, he won three honorary titles in Britain: Commander of the Order of the British Empire in 1979, Companion of Literature in 1994 and a knighthood in 2002.

He is survived by his wife and two sons. Funeral arrangements were not announced.