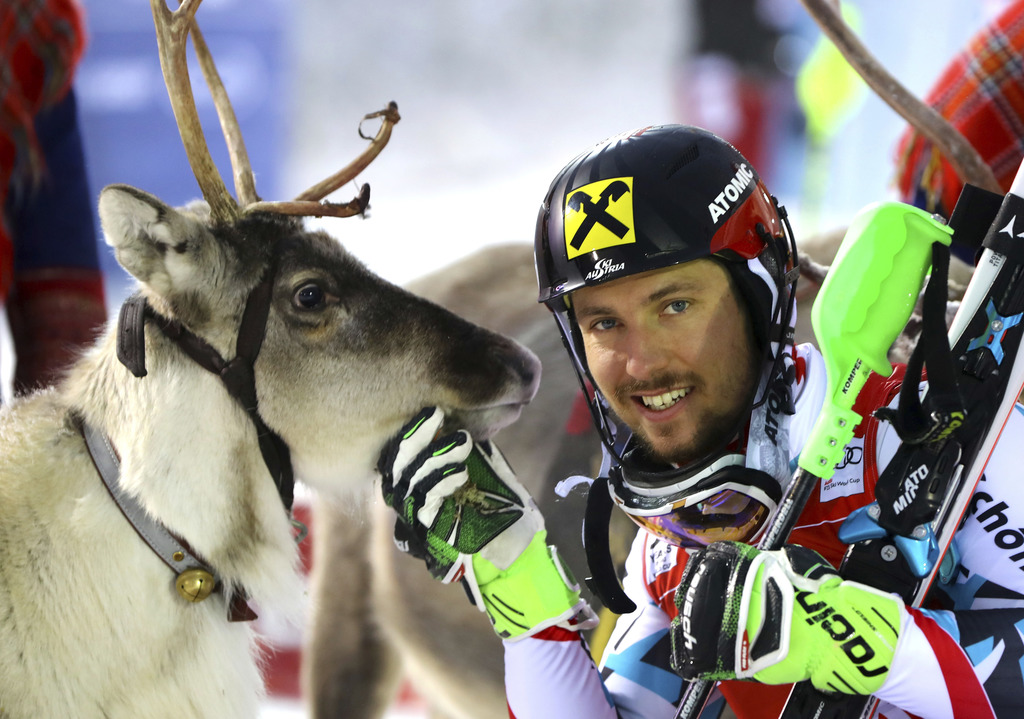 LEVI, Finland (AP) — It took Austria's Marcel Hirscher just two races to get back to where he finished each of the past five seasons — on top of the men's World Cup overall standings.

Hirscher overcame an illness on the eve of the slalom opener on Sunday to lead teammate Michael Matt for an Austrian 1-2 finish.

The five-time overall champion finished a huge 1.30 seconds ahead of Matt to clinch his 40th career win. It was the first Austrian 1-2 finish in a World Cup slalom since Hirscher beat Michael Matt's older brother, Mario, at the same venue three years ago.

Manfred Moelgg of Italy was 1.31 seconds back in third for his first podium finish in nearly three years, while Germany's Felix Neureuther came another 0.10 further behind in fourth.

"Physically it went very well. I have no pains. Yesterday it was really bad but this morning I knew it would work out," said Hirscher, who suffered from an inflammation of the middle ear.

He skipped Saturday's training and decided only in the morning hours before the race to start. He headed back to his hotel for treatment immediately after completing his first run.

Hirscher overtook Alexis Pinturault on top of the overall standings. The Frenchman, who beat the Austrian to win the season-opening GS last month, finished 1.87 behind in 11th. Hirscher has 180 points, 56 clear of Pinturault.

"I felt no pressure at all," Hirscher told The Associated Press. "For me personally, I have won already a lot of races and I am done with 'I have to win races.'"

Matt, who improved from sixth to second for his first career podium result, said he "was more nervous for my first run than for my second as I knew by then that everything was OK." He described being on the podium as an "amazing" feeling.

"I made a big step in the summer physically and mentally and the goals were top-10 results and now with the first race podium, it's amazing," he said.

Marco Schwarz, who trailed Hirscher by just 0.21 after the first run, slid off the course and didn't finish his final run, but another Austrian, Manuel Feller, took fifth.

Austria's slalom team lost several big names as Benjamin Raich, Mario Matt and Reinfried Herbst all retired in the past two seasons. But Hirscher said the many young and upcoming talents on the team help him to further improve.

"It's perfect in training," said Hirscher, who has won 19 slaloms in his career. "It wasn't easy for me in the beginning but the young guys really give me motivation. That's truly super."

Hirscher didn't want to give his huge winning margin too much meaning as his main rival from last season, Henrik Kristoffersen, skipped the race.

"One guy was missing, the fastest from last year. But it was a great race," Hirscher said.

Kristoffersen, who won six slaloms last year to claim the discipline title, sat out the race amid a dispute with the Norwegian ski federation over sponsorship rights. The federation's rules won't allow Kristoffersen to sign a personal sponsor for his helmet.

Hirscher said "it's pretty bad that ... the fastest slalom skier of the last season isn't competing" now and added that he hopes they can find a solution.

"Hopefully he's back in the next races because I have to see how close I can get to his pace," he said.

Britain's Dave Ryding, who was fourth after the opening run, dropped to sixth for his career-best result. And the winner of the final slalom of last season, Andre Myhrer of Sweden, failed to qualify for the second leg after he skied out of the course halfway through his run.

Tough conditions included temperatures of about 18 F (minus 8 C) and clouds hanging low over the course. Several racers complained about their goggles freezing up during their runs.

The men's World Cup continues in Lake Louise, Alberta, with a downhill and a super-G on Nov. 26-27.