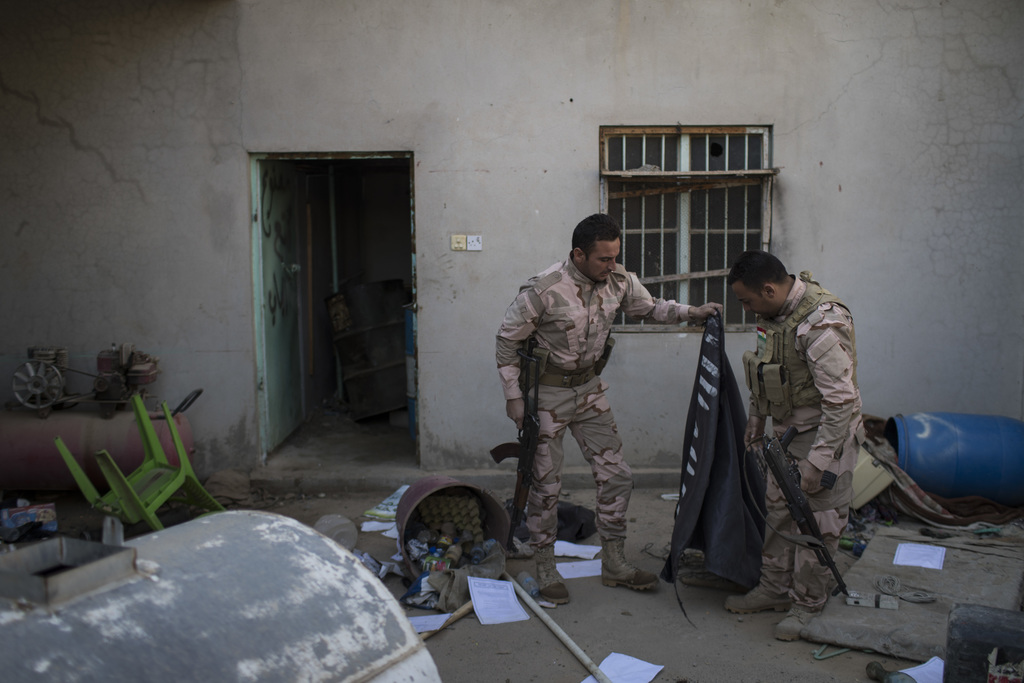 MOSUL, Iraq (AP) — Iraqi special forces mopping up in territory seized in eastern Mosul killed eight Islamic State militants Wednesday as residents fled to safety from nearby areas and men shaved the beards they were forced to grow while the extremists were in control.

In the easternmost district of Gogjali, shops were boarded up, with some reduced to burned-out shells. Families stood in their doorways, some holding white flags, while children flashed the "V'' for victory sign to the passing troops. A few women ululated in celebration as columns of vehicles passed.

Consolidating the gains in the area lays the groundwork for the troops' next stage of operation: entering Mosul's more urban central neighborhoods, a densely built-up zone likely to contain booby traps and roadside bombs.

That could mean house-to-house combat and might take weeks, if not months, with the city center about 10 kilometers (6 miles) away.

The area's deputy "emir" was sprawled on a central street, shot and killed by soldiers when he tried to approach them in an explosives-laden vest. Residents watched as the body, clad in a military uniform, was dragged away past an Abrams tank.

A man the troops identified as the deputy's superior was arrested and taken away in a military vehicle. He wore Afghan-style clothing popular among jihadis and a red kaffiyeh.

Six other militants were killed in a tunnel in the neighborhood, said Lt. Col. Muhanad al-Timimi of the Iraqi special forces, speaking in an interview with The Associated Press.

For Hassan Hussein, a 22-year-old father of two, the day marked a fresh start.

"Today I feel like a new man, especially after shaving for the first time in two years," he said. "My face feels cold!"

The Islamic State group enforces a strict code on public dress and appearance in territory it controls, with men required to have long beards, and women ordered to wear a niqab — a face covering and full-body veil over their clothes, under threat of lashings and fines.

Hundreds of civilians cleared out of the adjacent neighborhood of al-Samah, some carrying white flags. The women still wore the niqab, although many had removed their face veils and one took off the full-body covering entirely. The men retained their long beards.

Special forces went house to house in Gogjali throughout the day, while sappers searched the road for any explosives left behind by the jihadis. Only sporadic gunfire and artillery could be heard.

Gen. Abdul-Ghani al-Asadi, commander of the counterterrorism forces, said a curfew had been imposed in the neighborhood.

"We fear that Daesh militants could attack," he said, using the Arabic acronym for IS.

"So, for the safety of the families, we ask them to stay inside their houses," he said, speaking in the town of Bartella, about 15 kilometers (9 miles) behind the front lines.

Brig. Gen. Haider Fadhil said no further advances had been planned for Wednesday because high humidity and clouds obscured the view of aircraft and drones — a key component to the operations provided by a U.S.-led coalition.

Mosul is the last major IS stronghold in Iraq, and driving the militant group from the city would be a major blow to the survival of its self-declared "caliphate" that stretches into Syria. IS seized Mosul and other territory in 2014, routing the much larger Iraqi military, which had been neglected and demoralized by corruption.

Concern over the fate of civilians caught up in the fighting in and around Iraq's second-largest city has been growing. Residents reported that IS militants were rounding up thousands of people as human shields or killing those with suspected links to the security forces.

According to one account given to the AP, the fighters went door to door in villages south of Mosul, ordering hundreds to march at gunpoint into the city. Combat in the urban areas is expected to be heavy, and the presence of civilians will slow the army's advance as it seeks to avoid casualties.

Islamic State militants have carried out mass killings of opponents and boasted about their actions in grisly online photos and video. The United Nations has urged authorities to collect evidence of IS abuses of civilians for use in tribunals.

The Norwegian Refugee Council warned that more than 1 million civilians trapped in Mosul "are in grave danger" as Iraqi troops advance. The aid group, which works with refugees and internally displaced people, said about 18,000 Iraqis have fled their homes since the Oct. 17 start of the Mosul operation.

Adama Dieng, special adviser to U.N. Secretary-General Ban Ki-moon on the prevention of genocide, expressed concern over "the increasing risk" of sectarian violence or revenge attacks in the Mosul campaign, especially where state-sanctioned Iraqi Shiite militias are approaching Sunni communities.

"Any kind of retaliatory violence against individuals on the basis of their membership of a specific group is unacceptable," he said in a statement Tuesday.

Political rhetoric on the issue has been heating up, after Turkish President Recep Tayyip Erdogan warned recently that Turkey would be closely monitoring Shiite militias' behavior in northern Iraq and seeking to safeguard the rights of ethnic Turkmens there. Erdogan said the Iraqi Shiite militias could prompt a Turkish response if they "terrorize" the Iraqi-Turkmen town of Tal-Afar.

On Tuesday, Turkey's defense minister said his country was preparing for "all kinds of possibilities" as it began deploying tanks and other vehicles to the border town of Silopi.

"We don't want war with Turkey. We do not want confrontation with Turkey," he said. But if it happens, "we are ready."

Separately, Amnesty International said government-sanctioned tribal Sunni fighters taking part in the Mosul operation had carried out revenge attacks in newly liberated areas against men and boys they suspected of being IS militants.

Fighters from the Sabawi tribe, originally from Mosul, unlawfully rounded up civilians, beat them with metal rods, gave them electric shocks and tied some of them to vehicles and paraded through the streets or placed them in cages, the London-based group said, based on interviews with local officials and witnesses.