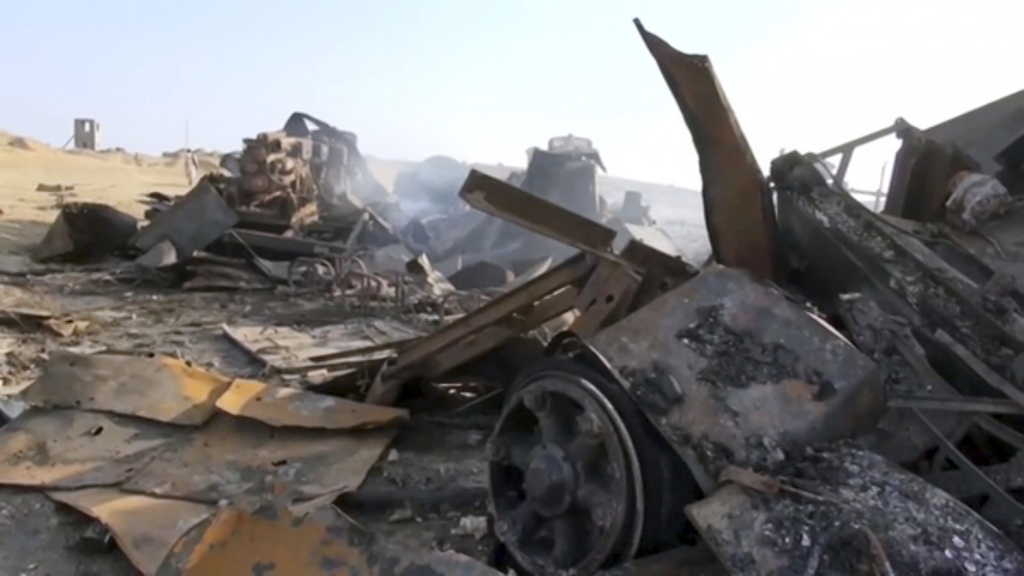 WASHINGTON (AP) — The direct U.S. entry into Yemen's civil war, for now a limited response to rebel missile fire on a U.S. Navy ship, risks a wider entanglement that could leave the next American president embroiled in a yet another unwanted Middle East war with broad implications for the region and beyond.

Obama administration officials from the White House, Pentagon and State Department all argued that Thursday's cruise missile strikes on radar sites controlled by Iranian-backed Houthi rebels were strictly a self-defense measure and not an escalation in military involvement.

"These strikes are not connected to the broader conflict in Yemen," Pentagon spokesman Peter Cook said. "We want to make crystal clear that if you threaten our forces, you threaten our ships, we will be prepared to respond, as we did in this case."

The potential consequences of more American military action — and even possibly inaction — could affect the stability of the longstanding U.S.-Saudi relationship, maritime security in an area where Iran has shown increasing interest, and last year's landmark nuclear deal with the Islamic republic. Any would impact the balance of power in the flashpoint region.

The U.S. is already involved in the conflict indirectly through its support of the Saudi-led coalition fighting the rebels on behalf of the Yemen government. And the willingness to move from proxy to active combatant, even in self-defense, opens the door to a greater role.

It has happened before. Despite a deep reluctance, President Barack Obama has expanded the U.S. military footprint in Iraq and Syria to confront the threat posed by the Islamic State group. In Yemen, the administration's actions have previously been confined to drone strikes against al-Qaida's affiliate there and logistical support to the Saudis. Strikes against Houthi targets are the first of their kind.

It appears the Houthis lashed out at the United States with missile fire against the USS Mason in the Red Sea in retaliation after warplanes from the Saudi-led coalition struck a funeral in the Yemeni capital Sanaa last weekend attended by senior rebel figures. The devastating airstrikes killed nearly 140 people, most of them civilians.

The missile fire from the Houthis missed the American ship, but chief of naval operations Adm. John Richardson said, "Enough was enough," and the Navy was ordered to launch five missile strikes.

State Department deputy spokesman Mark Toner said the sites "were specifically targeted in order to take out or in some way limit the ability for the Houthis to carry out these strikes."

Already, signs are there of broader implications of American military action.

Shortly after the missile strike, two Iranian warships began steaming toward the Gulf of Aden on Yemen's southern coast. Although ostensibly deployed as part of a regular anti-piracy patrol, the timing suggested it was aimed at sending a signal to the U.S., which has vowed to retaliate against any new provocations from the Houthis.

"We are prepared to respond if necessary to any future missile launches," White House spokesman Eric Schultz said. He called on all parties to the conflict to abide by the terms of a fragile agreement reached in April. "Our belief is the violence should subside consistent with the terms of that agreement."

Iran says it backs the Yemeni rebels but denies arming them. U.S. officials have held open the possibility that the Houthis may have captured some missiles from Yemen's army but have also made clear Iran is supplying them as well. These missiles, State Department spokesman John Kirby said this week, "are provided by Iran to the Houthi rebels."

Iran's support for the Houthis has been steady even as Washington engaged with Tehran on the nuclear deal, which went into effect in January and gave Iran billions of dollars in sanctions relief in return for limiting its nuclear program. Saudi Arabia and the Gulf Arab states, long concerned about Iranian intentions in the region, were highly suspicious of the agreement and welcomed it only coolly.

Perhaps in part to ease those concerns the U.S. has offered wide-ranging support for the Saudi-led coalition fighting Yemen's rebels.

That backing, however, has come under increasing criticism from lawmakers, human rights groups and others who have decried coalition airstrikes on civilians in Yemen as possible war crimes, including the weekend funeral attack. The U.S. has said it is reviewing its support although there is no sign that review will be completed quickly.

Despite denials of responsibility from the Houthis, many believe the funeral bombing sparked the rebels to launch more missiles into Saudi Arabia as well as attempt to target the U.S. warships.

Yemen's state news agency Saba — under Houthi control — quoted an unnamed military official as saying the U.S. accusations that the missiles were fired from areas under control of Houthis were false. He said they were an attempt to create "false justifications" to distract from criticism of the funeral attack.