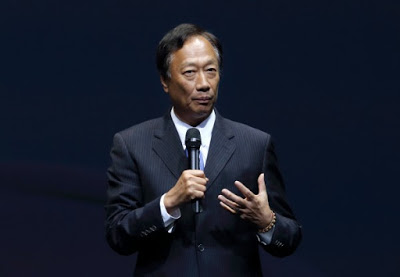 Foxconn to bolster investment in healthcare

After its strategic alliance and takeover of Japanese electronics maker Sharp Corp. to partly expand its IoT market presence this year, Hon Hai Precision Industry Co., the world’s biggest contract electronics maker by revenue, is eyeing to invest more in healthcare, according to local media reports. Better known as Foxconn, the Taiwan-based iPhone assembler's Chairman Terry Gou said on the sidelines of a summit in Shenzhen that he is personally interested in “anti-aging technologies and therapies” and “therapies curing cancer quickly and safely,” which, he believes, will need cloud computing and big data processing and analytics. At a summit hosted by Sinovation Ventures on Thursday, Terry Gou and Google Taiwan Managing Director Chien Lee Feng were both invited to deliver speeches and share their vision for the future. Lee Kai-fu, co-founder of Sinovation Ventures, sees the silver lining in Artificial Intelligence and believes it will replace lower-skilled jobs, which, precisely speaking, is to take over jobs that would get your brain to think in less than five seconds. Gou, on the other hand, is betting on healthcare products and services to tap into the lucrative wellness trends and to tackle problems of higher breast cancer incidence rates in Taiwan compared to its Western counterparts. Gou lost his first wife to breast cancer in 2005. To expand into healthcare market, Gou noted that he has established a private health-oriented foundation with continuing funding to support his vision. In 2015, Hon Hai was reportedly in talks with Palo Alto-based Varian Medical Systems to obtain the rights to sell radiation-treatment devices in China. Foxconn’s expansion into the medical devices market was said to come as it searches for new growth engines and clients amid rising competition in consumer electronics assembly.