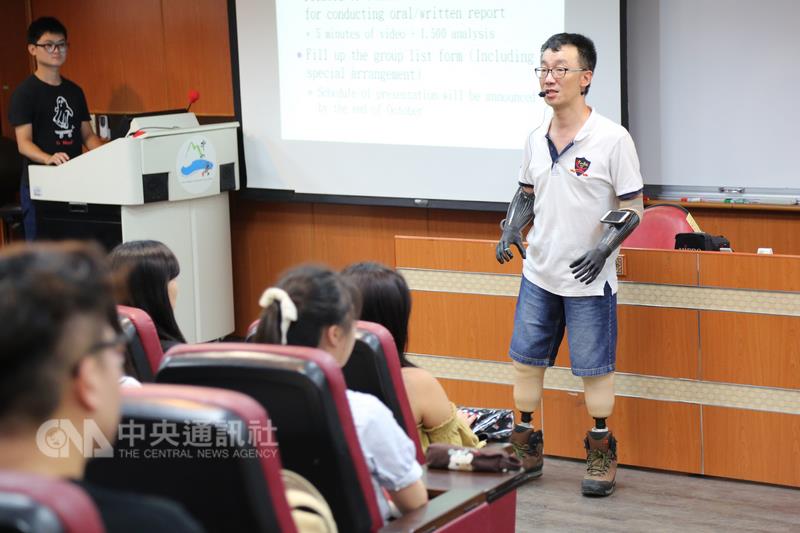 Quadruple amputee goes back to teach at NSYSU

A quadruple amputee picked up where he left off about a year ago and went back to his old profession of teaching in a university on Wednesday.

National Sun Yat-sen University (NSYSU) business administration assistant professor Wang Chih-yuan went on a mountain climbing trip to Taitung and Yilan in eastern Taiwan in Sept. last year. He felt sick during the trip and had a fever when he came back to Kaohsiung. He was treated at the emergency unit of a local hospital, but was found to have conditions of pulmonary infiltration, septic shock and multiple organ failure. He was intubated and transferred to an intensive care unit that night. The next day, the hospital informed Wang’s family that he was in critical condition. Soon after that Wang underwent dialysis treatment for acute kidney failure.

Wang’s students even took turn to keep him company in the hospital. He eventually survived and gradually got better, but he suffered from necrosis of the limbs. Wang was transferred to Cheng Hsin General Hospital in Taipei, where he had all four of his limbs amputated in November.

Wang, who had been so close to death, said he couldn’t even turn over his body in the two weeks after the amputation and at one time he thought of committing suicide. Last December he left the hospital and began the process of prosthetic fitting and recovery. Not until January this year could he stand up and stagger along to learn how to walk. As for the electronic arms, which cost NT$3 million, had to be custom made, so they were not fitted until April, when he began practicing how to use them.

He said the electronic arms had to rely on muscle and nerve transmission and buttons in the arm to change different positions previously set, such as clenching the fist, holding a mouse, or even the position for playing Pokemon Go, and the cell phone can be attached to the electronic arm.

The prosthetic company said the electronic arm can replace 90 percent of the function of a normal arm, but Wang said he felt it was only 40 percent. “It took me more than three months to learn how to take a fork to eat spaghetti, and oftentimes I made a mess of the table,” he said, adding that he still needs the help of a migrant carer to go about his daily life.

Wang had a good relationship with his students before the ordeal, and on Wednesday he was back at NSYSU and again stood on a platform to teach. Student were both moved and surprised. Some students said, “It is almost a miracle!,” and “Can’t imagine teacher is back to the campus after one year. It’s touching.”

Even though without real hands and feet, Wang has not ceased to explore and challenge. He used his electronic arm to sign course selection documents for students, and stood on his prosthetic feet, and even shared his results of catching Pokemon creatures with students.