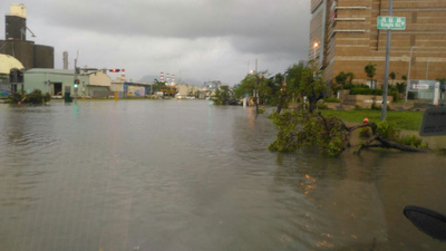 Taiwan’s agricultural losses from typhoon Meranti, which battered southern Taiwan last week, have reached over NT$850 million, according to the latest estimates by Council of Agriculture (COA) under the Executive Yuan.

Super typhoon Meranti has taken its toll on Taiwan, as the storm slammed into the island last Tuesday, leaving one person dead, 44 injured, and nearly one million households without power.

The estimated agricultural losses resulted from the typhoon rose to NT$850 million from an earlier estimate of NT$600 million released by the COA last week.

Kaohsiung, the second-largest city in Taiwan, took the biggest hit with losses amounting to over NT$481 million, followed by Pingtung County, with an estimated loss of over NT$147 million.

In terms of agricultural products, guava was the hardest-hit crop with 1,628 hectares of farmland and NT$250 million worth of crops damaged, according to the estimates, followed by dates, banana, and wax apples.

Applications for cash relief and low-interest loans are now available for farmers in areas affected by the natural disaster, including Kaohsiung, Pingtung, Kinmen, and Penghu, the COA said.