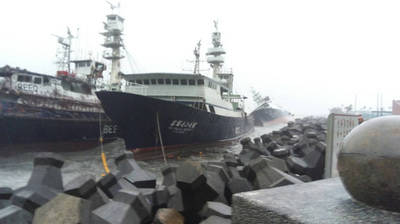 TAIPEI (Taiwan News) – Oil leaking from four fishing trawlers thrown loose by Typhoon Meranti was polluting the coastline of Kaohsiung City near Xiziwan, reports said Thursday.
Earlier, one crew member who had been reported missing after being swept off one of the ships was found dead, reports said.
During Wednesday’s typhoon, the four fishing trawlers had been situated inside the fishing harbor in Kaohsiung’s Qianzhen District. Their cables broke loose because of the strong force of the wind and the vessels drifted toward Xiziwan, an area known for its bay with a beach close to National Sun Yat-sen University.
Experts from the Kaohsiung City Government, the harbor authorities and the ships’ owners went to the site to evaluate the situation, and came to the conclusion that the damage to the ships was so serious that it would be impossible to tow them away. Environmental services sent staff to put up lines around the area which would stop the oil from moving to other areas.
The priority of the rescue team was to prevent the oil slick from expanding further, and to soak up the fuel which had already leaked into the sea, reports said. Once the sea had calmed down, a new evaluation would be made to see whether it was possible to tow away the ships without causing more leakage.
Typhoon Meranti left Taiwan early Thursday, but sea warnings were expected to be issued by midnight the same day for Typhoon Malakas, which was expected to disrupt traffic on Friday and Saturday, though mostly in the eastern part of the country.