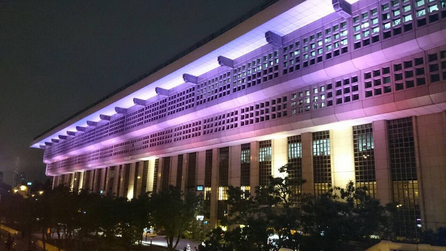 TAIPEI (Taiwan News) – A handful of railway union activists marked the start of the Mid-Autumn Festival holiday with a protest against overtime at the Taipei Railway Station Thursday.
Before the September 15-18 holiday started, there had been repeated concern that railway staff would refuse to work overtime and take due leave off, thus creating problems for the thousands of Taiwanese planning to travel around the island during the four days.
In the end, the threat did not materialize, but about 25 union members showed up at the Taipei Railway Station to express their concerns, reports said. They now said they might launch industrial action during next year’s Lunar New Year holiday from January 27 to February 1.
“Only if employees are not tired by excessive work can the railways be safe,” a banner read.
The protesters called on the Taiwan Railways Administration to take on extra staff, to raise wages and to allow present employees to take days off. They said that their afternoon sit-in would be followed by an evening protest as well.
The event echoed similar other protests earlier this month. The Taipei Railway Station also saw a representative from a flight attendants union appear to express support for the cause.
Staff at China Airlines, Taiwan’s main carrier, held a 24-hour strike earlier this year, touching off a series of protests and claims from a variety of employees from various sectors of the transportation industry.
The CAL flight attendants saw their demands accepted quite rapidly by a newly appointed airline chairman, fueling the hopes of staff at other companies that similar protests would be equally rewarded.
In addition to CAL and to the railways, staff at budget airline V Air has also come out in protest against a decision by its owner, TransAsia Airways, to suspend operations at the low-cost carrier for one year beginning October 4.