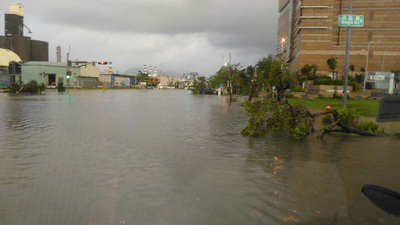 TAIPEI (Taiwan News) – With Supertyphoon Meranti barely gone, the Central Weather Bureau was preparing to issue sea alerts for Typhoon Malakas by the end of Thursday and land alerts the following day, reports said.
Meranti left at least one person dead and more than 40 injured on a trail of destruction that passed through Southern Taiwan Wednesday, just ahead of the four-day Mid-Autumn Festival vacation. The bureau lifted land and sea warnings for Meranti at 11:30 a.m. Thursday.
However, the end of the holiday now looked certain to be disrupted by Typhoon Malakas, with sea warnings expected around 11:30 p.m. Thursday and land warnings at noon Friday. The impact of the storm would be the heaviest during Friday and Saturday, forecasters said.
While Meranti moved from east to west just south of Taiwan and later plunged into China’s province of Fujian to weaken into a tropical storm, Malakas is following a south-to-north coast over the Pacific east of Taiwan but would pass closer to the island than previously expected, forecasters said.
The new typhoon would approach southeast Taiwan Friday morning, and be situated just east of Northern Taiwan Saturday morning around 8 a.m. before moving away in the direction of Southern Japan, the weather bureau said.
At around 7 p.m. Thursday, the eye of Malakas was still located about 900 kilometers east-southeast of Taiwan’s most southerly region, the Hengchun Peninsula, and it was moving northwest at a speed of 22 kilometers per hour.