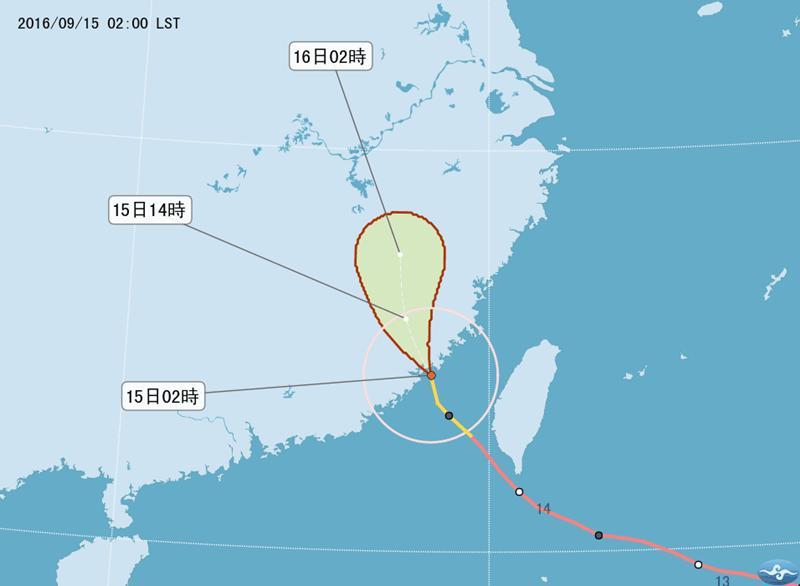 Taipei, Sept. 15 (CNA) Parts of Taiwan will continue to be affected by Typhoon Meranti Thursday with torrential rain likely to fall in Hualien and Taitung Counties in the east and some heavy showers also expected in central and northern Taiwan, the Central Weather Bureau said.

In addition to strong winds and heavy rain, the bureau warned the public not to engage in angling or water activities along Taiwan's seashores because of high winds and big waves.

Meranti's influence on Taiwan proper is expected to gradually decline Thursday morning, with the offshore islands in the Taiwan Strait seeing clearer weather in the evening.

As of early Thursday morning, only the Kinmen Islands remained covered in the storm, which made its way into China's Fujian Province during the night.

The typhoon, described as the worst in southern Taiwan in decades, battered Kaohsiung, Pintung and Tainan areas Wednesday, leaving dozens of people injured and thousands of home without electricity on the eve of the four-day Mid-Autumn Festival holiday.

The latter part of the four-day weekend could be affected by another typhoon -- Malakas, which is forecast to travel northwards off Taiwan's eastern coast later this week.

Malakas will be closest to Taiwan on Friday and Saturday, the weather bureau said, asking those who have plans for outdoor activities during those two days to pay attention to the latest typhoon information.

How strong an impact the latest typhoon will have on Taiwan will depend on exactly how close it get to the island, the bureau said.