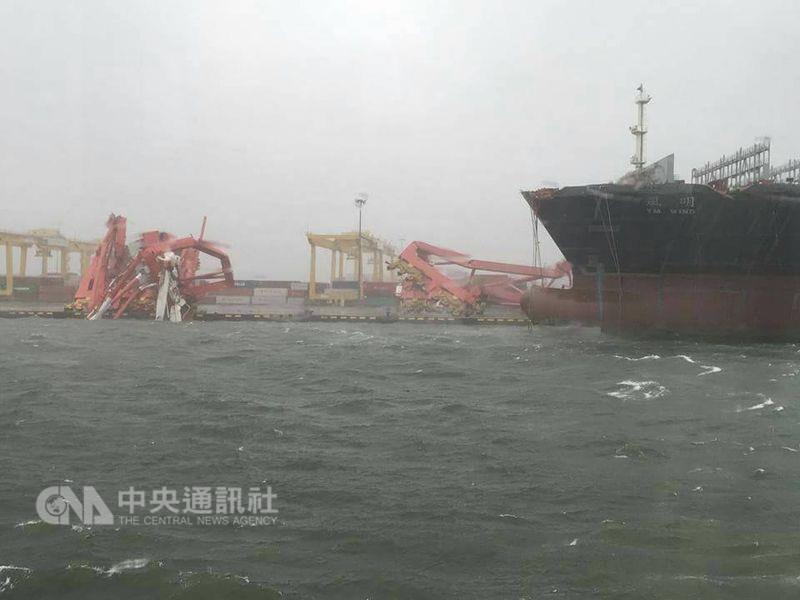 TAIPEI (Taiwan News) – As Typhoon Meranti headed into the Taiwan Strait Wednesday evening, the scale of the devastation it left across Southern Taiwan became clear.
By 6 p.m. Wednesday, the eye of the storm had already moved near Penghu about halfway between Taiwan and China, but the southern part of the country was still dealing with the aftermath.
Kaohsiung City, the counties of Pingtung in Southern Taiwan, Penghu in the Taiwan Straits, and Kinmen near China’s Fujian Province announced Wednesday that their offices and schools would be closed on Thursday.
Strong winds had battered the Hengchun Peninsula, the country’s southernmost part, usually one of its busiest touristic areas, especially with the September 15-18 Mid-Autumn Festival holiday on the way.
Many visitors had canceled their stay, while TV stations showed how an ambulance driving along a coastal road was almost swept away by a huge wave.
In Taiwan’s second city, Kaohsiung, the cables tying a container ship to a pier snapped, sending the vessel adrift in the harbor. A port authority towing boat managed to regain control and to prevent the ship from causing more damage, reports said.
Also in Kaohsiung, strong winds blew into a stack of containers, causing the 10-meter-long metal objects to collapse like a house of cards, reports said. Eyewitnesses told reporters that in some places, containers were lying in the middle of the road, posing a hazard to passing traffic.
In the Xiaogang District, the wind ripped the windows of a convenience store to shreds and went on to turn its interior into chaos, according to media footage.
Transportation also suffered under Typhoon Meranti, with many flights in and out of Kaohsiung canceled, though mostly international connections at Taiwan Taoyuan International Airport went ahead without too many problems.
A total of 1 million homes in Kaohsiung had reportedly lost running water, while more than 200,000 were left without electricity.
High speed rail service was also suspended for hours near its southern end because a net covering vegetables at a farm had been blown away onto the tracks, reports said. Normal service in both directions resumed at 9 p.m.
While the impact of Typhoon Meranti was expected to diminish during Thursday afternoon, Typhoon Malakas was likely to move up the east coast and bring more bad weather toward the end of the Mid-Autumn holiday, on Saturday and Sunday, forecasters said.