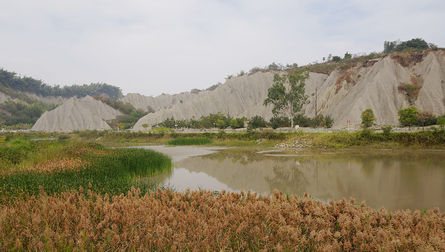 The well-known mudstone badlands located in Tianliao District, Kaohsiung City is an expanse of undulating barren hills capped with jagged ridges and knife-sharp peaks. People in Taiwan call this type of landform "moon world," and therefore it’s considered as an appropriate place to visit on the occasion of the Moon Festival. This type of spectacular landscape can also be found in Tainan's Longci and Juojhen districts, Kaohsiung's Neimen and Yanchao districts, Taitung’s Liji as well as Pingtung’s Hengchun Township.

Tianliao's "Moon World" has been the scene of dozens of movies. The barren ridges are reflected on the surface of a lake below them during good weather, making the place even more desolate and mystical, especially at night.

To provide better services for the tourists, the Tourism Bureau of Kaohsiung City Government has created Tianliao Moon World Landform Park, featuring ecological parks, lakeside walkways, the Path to the Moon Walkway, and the moon platform. Visitors are advised to stop first at the Tourist Center, where they can collect useful information or sign up for a guided tour. If you go, take National Highway No. 3 to the Tianliao Interchange, then get onto Highway 28 heading towards Cishan, and you will see the special terrain. Or take Kaohsiung Bus for Cishan and get off at the "Moon World" stop. Or you can also plan a bike ride to the Moon World and the surrounding areas.