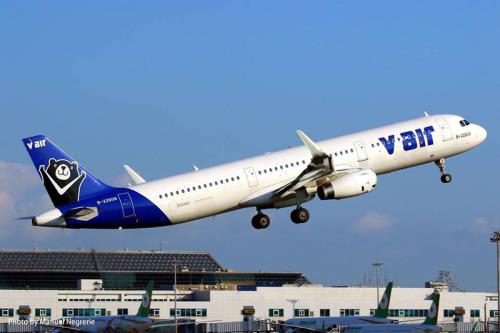 TAIPEI (Taiwan News) – Dozens of flight attendants at low-cost operator V Air marched through a Taiwan Taoyuan International Airport terminal Tuesday in a protest against the company’s treatment of its staff ahead of its demise.
Following reports that Taiwan’s low-cost airlines were not doing well, TransAsia Airways announced last month that its subsidiary V Air would suspend operations for one year beginning October 4.
About 45 flight attendants gathered at the airport’s Terminal 1 Tuesday afternoon to call for TransAsia to take part in the negotiations while also protesting against layoffs. The protest took place near the TransAsia desk and incited passengers’ attention, but did not disrupt any boarding or other airport activity, reports said.
“TransAsia grabs air rights, V Air lays off,” the placards held up by protesters read. After shouting slogans near the airline’s desk, they walked all around the terminal,
The protesters blasted a reported rule in their contracts stipulating they should pay NT$300,000 (US$9,450) to the company if they left their jobs within three years. Now that V Air was about to go out of business, the staff would only have worked there for two years and six months.
In addition to the legal severance payments, V Air should also pay NT$600,000 per person in compensation, with half serving to pay according to the clause in the contract, and the other half to make up for half a year of unemployment, protesters said.
TransAsia said that despite the troubles, it would respect the stipulations of the Labor Standards Act and hand out severance payments that were more than those demanded by law. The company regretted that what it called “an association which did not hold the legal status of a union” used inflammatory language and irrational protests to make its case.
The Taipei City Government’s Department of Labor Affairs has become involved in the negotiations between management and employers to discuss a resolution for V Air.