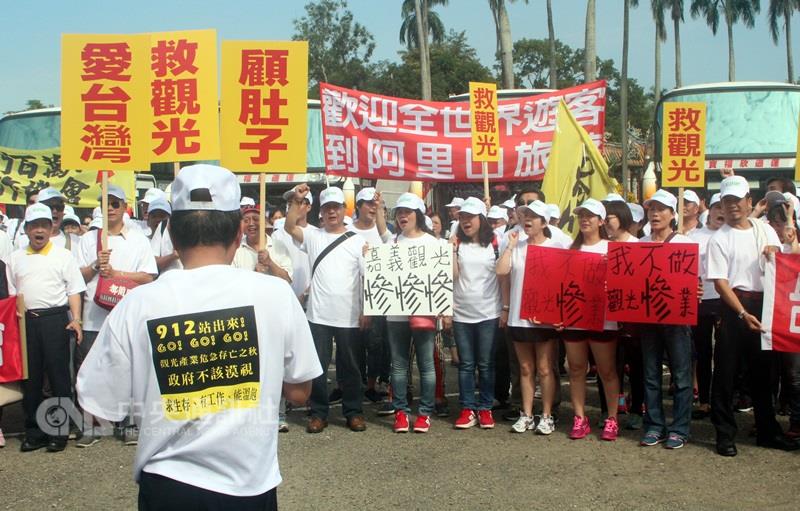 Two business owners from Chiayi, who joined Monday’s protest in Taipei City organized by tourism related chambers of commerce around Taiwan, said they hope the government will listen to their appeals and do something to help them feed their families as their businesses have been hardly hit by declining Chinese tourist numbers.

Lin Hsia-chou, who runs a restaurant on Alishan, and Lin Mei-mei, who owns a shop of tea leaves in Chiayi, are among the protestants from Chiayi who came to join the protest in 13 tour buses.

Numbers of Chinese tourists visiting Alishan have dropped 80 percent, seriously impacting business in the area, Lin Hsia-chou said, adding that his restaurant used to have more than 30 employees, but now there are only about 10. He pleaded the government not to interfere with people’s life with its political stance, saying that their appeal is very simple, and that is they want to have a stable life and they want to be able to make a living.

Lin Mei-mei said Chiayi is a major disaster area resulting from declining Chinese tourist numbers. People from the tour guide, hotel, gift shop, tea leaf and other tourism related sectors have come along to make their voices heard as they all have been hardly hit by the low turnout of Chinese tourists, she said.

She said the government’s policy has left the country’s tourism industry in a desolate situation and the families of the 30 some employees in her tea leaf shop have been affected. She said that’s why she came out to urge the government to look into the issue.

To relieve some pressing issues caused by poor Chinese tourist turnouts, the Cabinet has approved NT$30 billion in loans for the tourism sector. However, both Lin Hsia-chou and Lin Mei-mei are suspicious of whether the measure will be of any benefit to them, and call on the government to come up with something more effective to solve the problem.