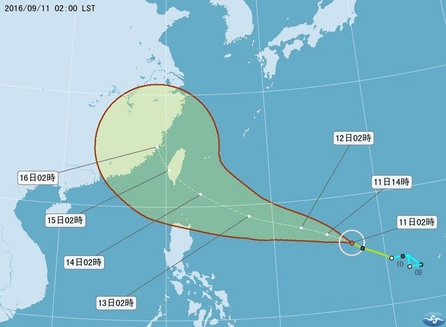 Typhoon Meranti intensifies and towards Taiwan

According to the latest typhoon update, Typhoon Meranti was centered about 1,700 kilometers southeast of Taiwan's southernmost tip of Eluanbi as of 11 a.m. on Sunday morning. The storm was moving west-northwest at a speed of 25 kilometers per hour.

The CWB said Typhoon Meranti continues to strengthen and can be upgraded to a moderate typhoon on Sunday afternoon.

Even though the typhoon is heading in the direction of Taiwan, but the path can be changed as time goes on, the CWB said, adding that if the Pacific high pressure system maintains its current intensity in the future, the path of Typhoon Meranti can move towards south.