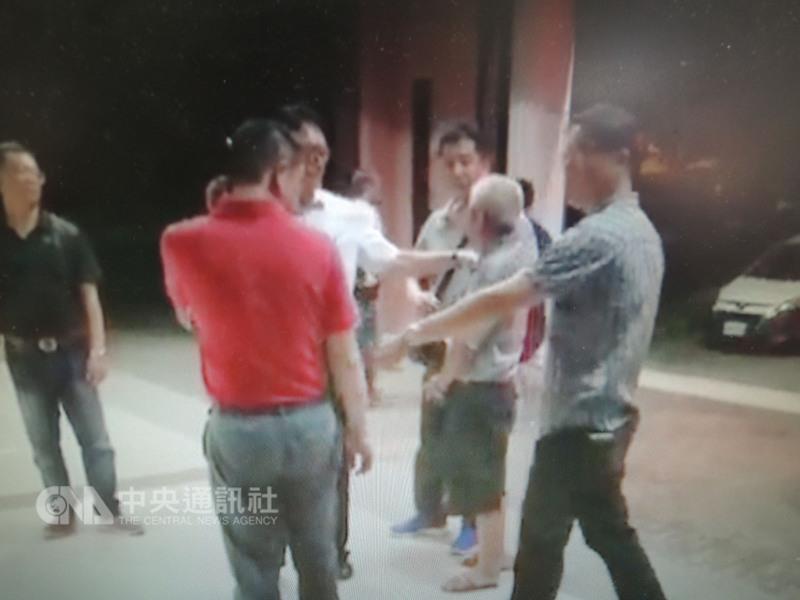 Police said Sunday that a male employer surnamed Hsieh who is suspected of sexually attacking an Indonesian female caregiver was arrested in Taichung City around 2 a.m. Sunday. Prosecutors said they were seeking the detention of the suspect. Police said Hsieh, 59, had confessed to sexually assaulting the caregiver, adding that they arrested the suspect at a place about four or five kilometers away from his home. Hsieh said he left home and wandered about after the infamous case broke out and that he didn't want to stay with any friend for fear that he would be laughed at for having done such a thing. The Indonesian caregiver was hired to take care of Hsieh's father, who is older than 90 with limited mobility, Taichung City's Labor Affairs Bureau (LAB) said.

(The suspect is the white-haired man second from right.) The suspected sexual attack was captured by the caregiver using her cell phone. The victim mailed the footage, which is more than five minutes long, to the human resource company that brokered her job, but the company reportedly had not actively intervened in the case. The footage was later transmitted to SUARABMI.COM and was released by the Indonesian media. The footage reportedly showed the male employer with his upper body bare and the caregiver fighting against the unwanted sexual advance and screaming out loud, pleading the employer not to attack her. The footage was said to have enraged the Indonesian audience. Taichung Police Department said the 1955 hotline for migrant workers received a complaint at 5 p.m. on Friday that an Indonesian caregiver was alleged sexually attacked by her employer. The hotline notified the LAB of the complaint. The bureau then notified the police of the case. According to police investigation, the caregiver came to Taiwan for the job at the end of last year, and the alleged sexual attack, captured in the video footage, happened in July this year. After questioning the victim, prosecutors suspected that the attack captured in the video was not the first time as the Indonesian caregiver had her cell phone ready to capture the alleged attack. After the questioning, prosecutors issued a warrant for the arrest of the employer. The Indonesian woman, who was very agitated and unstable emotionally, was accompanied by LAB personnel to a hospital for examination and sampling and was then placed in local authority care. She committed suicide by cutting her wrist and was rushed to hospital, where her life was saved. She was reportedly unfit for questioning Saturday due to her emotional state.