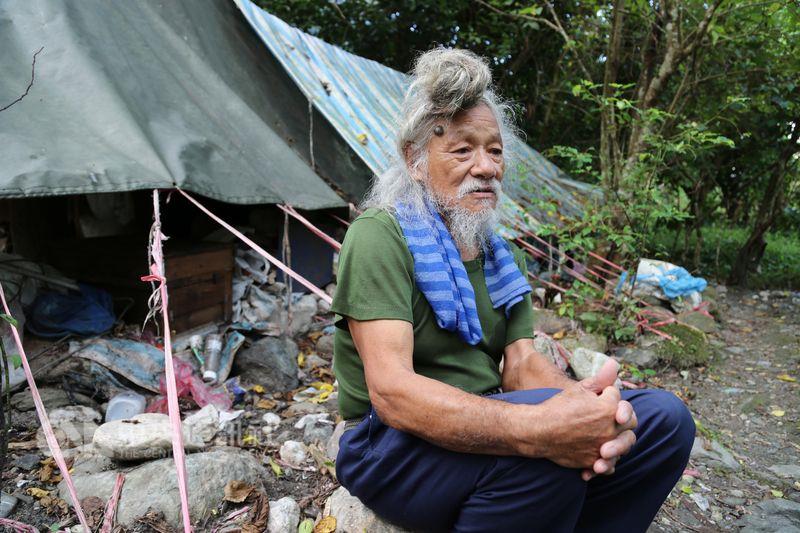 An old man has been living a caveman style of life by the riverside in Hualien County for decades. He said he enjoys living alone in the outdoors in a simple, primitive way. Young Shan-doe lives in an open tent by the bank of Baibao River in Shoufeng Township, Hualien County. He said he is not afraid of typhoons or torrential rains because during times of unusual or extreme weather patterns, he will reside in a culvert to shield himself from winds or rains.

Village administrator Chang Ching-fei said he is worried about Young, so he visits him frequently and gives him things. He said he had tried to persuade Young to accept resettlement and live in a veterans’ home. But Young had repeatedly rejected the idea, saying he has been used to living freely and by himself, Chang said, adding that Young said he only asks for a simple life and having something to eat and clothes to wear to sustain his life. Young, 84, is unshaven, wearing a long white beard and long hair with a topknot. He lives by the river in deep mountains without running water and electricity like a modern caveman.

His makeshift tent consists of plastic sheeting and canvas. He uses candles or a flashlight for lighting during nights, and when it’s cold, he will wrap himself in a blanket. Young said he used to light a fire to cook, but after his cooking utensils were stolen, he goes down the mountain to purchase prepared food and milk. Young said his hometown is in Yunnan Province, China, and he came to Taiwan with the Nationalist Party’s (Kuomintang) government. Young said he lived with some fellow townsmen in Hualien after retirement around 1961, growing crops for a living but the life was hard as natural disasters often rendered crops harvestless. Some of his townsmen got married and moved out to raise a family, some went back to China to settle down, and others died, he said, adding that he was the last one still living in Hualien.

Young relies on an old radio to learn what’s going on in the outside world. He said in the past public order was good and the environment was clean, so he could catch fish and shrimps in the river for food; but now everything has changed, the water in the river is polluted, and even his eating utensils got stolen. “But the most detestable was that people came to spray pesticide and herbicide, which made me sick for many days,” he said.