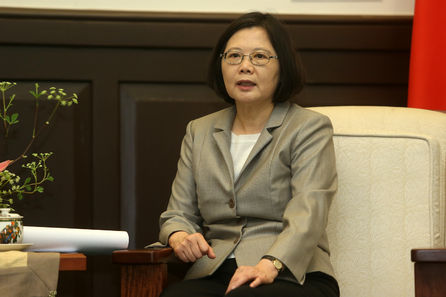 Approval for Tsai drops below dissatisfaction

TAIPEI (Taiwan News) – For the first time since she took office last May, President Tsai Ing-wen was shown to have more detractors than supporters, according to an opinion poll released Wednesday, her 60th birthday.
Previous surveys revealed a fall in popularity for her premier, Lin Chuan, who was also sworn in on May 20, but the latest Taiwan Indicators Survey Research poll said that while 42.8 percent of respondents were satisfied with Tsai, 45 percent were not. The situation where the line representing the negative overtakes the positive on a survey graphic is known as a “death cross.”
As in similar recent surveys by other organizations, it was not so much the president’s popularity rating which fell, as the number of people dissatisfied which rose. Compared to a TISR poll conducted one month earlier, Tsai’s support had slipped by 5 percent, but the dissatisfaction rate rose by more than 10 percent.
When the pollsters asked whether the public trusted Tsai, the figures came out markedly different, with 53.4 percent trusting her while only 32.9 percent gave the opposite answer.
On Premier Lin, the TISR survey showed a picture similar with other recent polls. Over the past month, satisfaction with the former finance minister fell to 35.3 percent from 40.1 percent, while dissatisfaction surged to 46.5 percent from 34.4 percent.
On Tuesday, a former presidential adviser, Wu Li-pei, said Tsai needed to replace Lin or she would “have no tomorrow.” He described the premier as being too conservative on economic and financial matters and his Cabinet as containing too many officials from previous Kuomintang administrations.
The TISR survey was conducted on August 28-29, received 1,004 valid samples and had a margin of error of 3.1 percent.