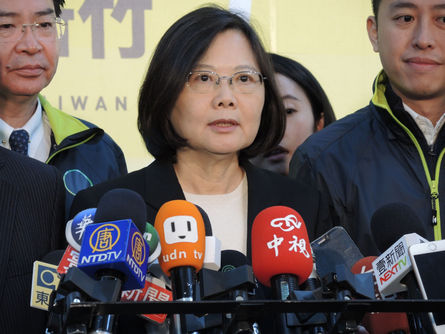 More than half satisfied with Tsai: poll

TAIPEI (Taiwan News) – Slightly more than half the Taiwanese were satisfied with the performance of their new president, Tsai Ing-wen, two weeks after she was sworn in, a poll commissioned by the Taiwan Thinktank showed Friday.
Tsai and her new administration were inaugurated on May 20, more than four months after she and her Democratic Progressive Party won a decisive election victory.
Tsai received the approval of 52.4 percent of respondents, with only 12.5 percent expressing negative views, according to the poll. When looking at regional results, Kaohsiung City and Penghu County gave her the highest positive ratings, up to 59 percent.
Premier Lin Chuan, who also took office on May 20, saw his approval at 47 percent, with 14.8 percent disapproving. His maximum level of 56.3 percent was reached in Tainan City, Chiayi City, Chiayi County and Yunlin County, the poll said, though Kaohsiung, Pingtung County and Penghu also gave him 54.4 percent.
While the new government has been noted for coming up with many new policies, at least two thirds of respondents wanted the Cabinet to take more time and discuss the proposals before finalizing them, the Taiwan Thinktank said.
Turning to recent political subjects, almost half expressed disapproval of Health and Welfare Minister Lin Tzou-yien’s failure to use the name ‘Taiwan’ during his recent speech at the World Health Assembly in Geneva. The negative rating stood at 46.7 percent, while 34.8 percent could accept his wording.
On the issue of the import of pork from the United States containing residues of ractopamine, 75.8 percent said they did not believe Taiwanese pork was free of the leanness drug. A total of 74.6 percent said local pork should not be allowed to contain ractopamine, and even if U.S. imports were allowed, 64.3 percent said there should still be a complete ban on ractopamine residues in Taiwanese pork.
More than half of respondents, 56.7 percent, called for heavier fines for food safety violators, while 50.8 percent said there should be more stringent checks on food that was being imported or exported.
The poll was conducted by Trend Survey and Research Co., Ltd. on behalf of the Taiwan Thinktank on May 30 and May 31. There was 1,157 valid responses for a margin of error of 2.88 percent.