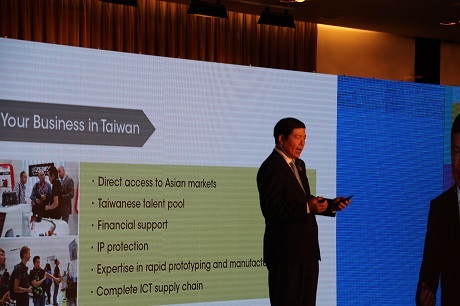 COMPUTEX 2016, the largest information and communications technology (ICT) show in Asia, will feature Internet of Things (IoT), innovative startups, and gaming from May 31 (Tuesday) to June 4 (Saturday) in Taipei, according to Walter Yeh, Executive Vice President of the Taiwan External Trade Development Council (TAITRA), one of the COMPUTEX co-organizers, at the international press conference on Monday.

The IoT applications include seven exhibiting categories such as Smart Manufacturing, Security, Smart Home, Wearable Technology and 3D Printing, with most of the exhibits being housed at the brand new SmarTEX exhibition area. Key players in IoT include Siemens for Industry 4.0, ABB for industry robots, Mercedes Benz to showcase Intelligent drive system and Audi for its virtual cockpit. Major Taiwan companies include ASUS, Acer, TSMC, Mediatek, and Advantech, TAITRA said.

Visitors will be able to experience VR at InnoVEX, showcased by SAMSUNG and HTC.

For the first time, the world famous OC World Tour will be held at COMPUTEX during the show, Yeh said. There are more than 20 overclockers coming from over 10 countries, including world ranking top three overclockers, he added.

COMPUTEX d&i awards, organized by TAITRA and executed by the International Forum Design (iF), honor products with excellent design as well as technical innovations, TAITRA said. This year TAITRA received 253 entries from 108 tech companies coming from 12 countries worldwide. A total of 87 winning products from 46 companies have been chosen for the awards, according to TAITRA.