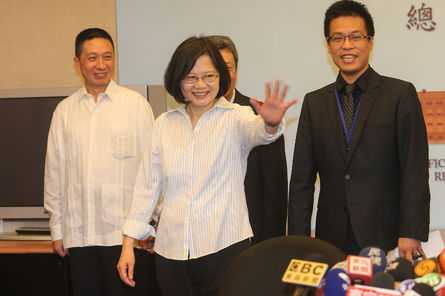 Taipei, May 26 (CNA) President Tsai Ing-wen said Thursday that the thing she has felt most unaccustomed to in the week since she assumed office has been having to read from prepared scripts when receiving foreign dignitaries.

She made the remark in response to a reporter's question at the Presidential Office.

She was reported to be tongue-tied during a meeting earlier in the week with Marcus Jadotte, assistant U.S. secretary of commerce for industry and analysis. Tsai took time out from her hectic schedule Thursday to have a tour of the Presidential Office and chat with staff and media there.

It was the first time Tsai and Vice President Chen Chien-jen had taken a good look around the Presidential Office since assuming office May 20, and many staff and volunteers sought her autograph or asked to have a photo taken with her.

The media also asked about two pictures posted online, one showing Tsai with her knees closed during a recent meeting with U.S. Congressman Matt Salmon, who had his legs crossed, while another picture showed an American meeting with a Chinese official, with the former with knees together, while the Chinese official had crossed legs.

Tsai said she did not expect that this could be a source of discussion, but added that "maybe it was because the Americans felt more comfortable here." She also disclosed that she eats boxed lunches sent from home, instead of the boxed lunches provided by the Presidential Office, which are praised for their richness and nutrition, as well as a low cost of only NT$50 (US$1.53). Tsai did not disclose who prepares her lunches.

When the media asked for more freedom to move around the Presidential Office instead of being confined to the press room and an adjacent bathroom, Tsai said that she is "also new here and I dare not make a decision too soon. This issue is better left to the (Presidential Office spokesman)." (By Tai Ya-chen and Lilian Wu)