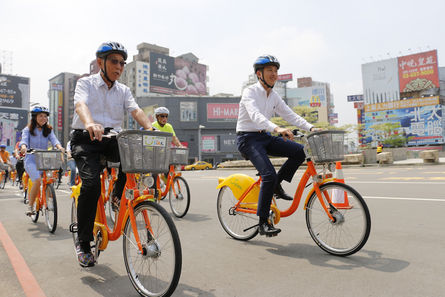 Hsinchu City on Thursday launched the trial operation of YouBike with 10 stations having been installed in the city. The trial operation was inaugurated by Mayor Lin Chih-chien and Giant Manufacturing Co founder and chairman King Liu riding YouBike alongside each other. Giant is the company that operates Hsinchu’s YouBike system. The company and the city signed an agreement in December last year to start the project. The city’s transportation department said that in order to boost the utilization rate, the first 30 minutes of YouBike ride is free of charge. Currently the 10 YouBike stations in the city include the HsinChu City Government, East Gate, Zhongzheng Rd. and Beida Rd. intersection parking lot, Residence of Principal Hsin Chih-ping parking lot, Ming Zhi Shu Yuan parking lot, Jianguo Park, Hsinchu Railway Station, Yan Ping parking lot, Hsinchu Park, and Big City shopping mall. Currently a total of 540 bikes are distributed to the operation of the 10 rental stations in Hsinchu City. The mayor said he expected the number of YouBike stations to extend to the planned 30 and the number of bikes to exceed 750 by the year-end. In order to cope with various problems that might emerge from the trial period, the city government has set up an “emergency team,” which is headed by deputy mayor Shen Hui-hong, the mayor said. Within an area of 1km² of the old city section, there are 28 ancient sites and historical buildings, including the 186-year-old East Gate, the 102-year-old Hsinchu Railway Station, and the century-old City God Temple; and all of them are easily accessible by YouBike, the mayor said. YouBike company said people who ride YouBike more than 11 days between May 26 and June 30 are eligible to take part in a prize drawing for limited 200 YouBike earphones, and the three people with the most rides are additionally eligible to enter a lucky draw for brand bags.