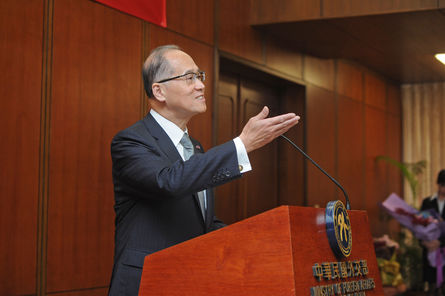 TAIPEI (Taiwan News) – Foreign Minister David Lee told legislators Wednesday he favored “presidential diplomacy” and confirmed he was preparing for President Tsai Ing-wen to travel overseas next month.
Tsai has been invited to attend a ceremony at the Panama Canal on June 26 and was also likely to visit Paraguay and to transit in Miami and Los Angeles. It would be her first foreign voyage since being sworn in with her entire administration on May 20.
In a report to the Legislative Yuan’s Foreign and National Defense Committee, Lee listed the continuation of “presidential diplomacy” as one of his priorities, saying he wanted Tsai to pay visits to Taiwan’s 22 diplomatic allies in order to cement positive relations.
The practice started under President Lee Teng-hui and has proven its value, the minister said, adding that two heads of state could talk face to face and discuss important issues.
In his report, the foreign minister listed eight important policy directions, including Tsai’s “New Southward Policy,” which will be managed by a newly established division inside the Presidential Office headed by former Foreign Minister James Huang.
One of the aims of the new policy is to reduce the dependency of Taiwan exports on one market, meaning China, while developing closer trade ties with Southeast Asia and the Indian subcontinent.
The new government would also proactively establish channels of communication with countries in the region to prevent conflict situations from escalating, Lee’s report said, indicating the disputes over islands and reefs in the South China Sea and near Japan.
The government also planned to set up an International NGO Center to intensify cooperation with private social organizations and an Asia Pacific Humanitarian Assistance Platform which would help to improve Taiwan’s positive international image, the report said.
The document named China as “an important element” in the development of Taiwan’s foreign relations and said mutual trust could be established through patience and wisdom.