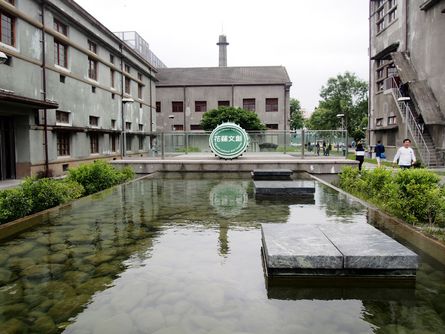 Located in downtown Hualien, a-zone Hualien Cultural Creative Industries Park is an old winery built in 1913,which has now been transformed into a huge complex for a variety of cultural events and commercial activities. The historical warehouse occupies 3.3 hectares and includes 26 old factory warehouses, forming the oldest creative industries park among four of the kind in Taiwan.

Maybe you have wondered why most of the cultural and creative parks in Taiwan are reconstructions of either a winery or tobacco factory. The story can be dated back to the economic policies of the Japanese colonial period. The tobacco business around 1905 was run by the Japanese government in order to make up for a tax shortage. The government was in control of everything related to tobacco, from the planting of the material, reproducing, and sales. After World War I, tobacco was not only for local sale, but also exported to Central China, Southern China, and Southeast Asia which brought the Japanese government a great fortune at the time and made a huge contribution to the wartime economy.

The Hualien winery was built to produce red wine and rice wine during the Japanese colonial period. Considering the need of quality water for making high quality wine, the 3.3 hectares park area includes three natural fountains, making it the top choice for building the winery.

a-zone was gradually opened up to visitors after its renovation since 2012, and the space is now used for exhibitions, restaurants, souvenir shops, and artist-in-residence programs. A regular fair named “Brewing Market” which promotes local artists’ and local studio’s handicrafts has been running for four years and has been luring more and more artists to join the project.

Located in the creativity park, Doing Good Restaurant is reconstructed from the old winery’s warehouse, offering an open space that includes a dining place, book store, flower store, and a children’s play yard. “Those are the marks from the old time wine urn”, pointing at the marks on the floor, Liang Tzu-ang, the CEO of the restaurant, said. In order to bring the historical atmosphere to the customers, the management has decided not to make a thorough reconstruction, but to keep the traces of the old time, and bring the new ideas into the building, creating sparks by mixing the old building with new ideas.