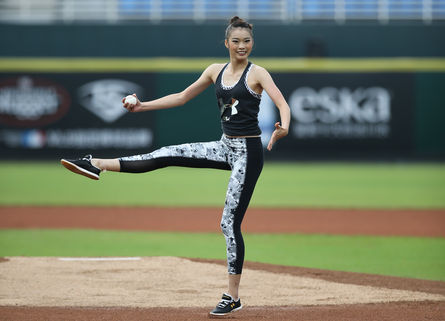 The delicate performance by a gymnast at the opening of a Chinese Professional Baseball League (CPBL) game on Monday caught the attention of the Major League Baseball (MLB) website, which described it as “an amazingly acrobatic first pitch,” according to media reports. Gymnast Yang Chian-mei performed a gymnastic routine on the mound before throwing the first pitch for a Lamigo Monkeys baseball against the Chinatrust Brothers in Taoyuan on Sunday.

Yang started the performance with a hoop and then with a ribbon. She then made a dozen delicately executed turns before pitching a strike to start the game. Yang, a student of the National Taiwan University of Sport, won the rhythmic gymnastics gold medal at this year’s National Intercollegiate Athletic Games.