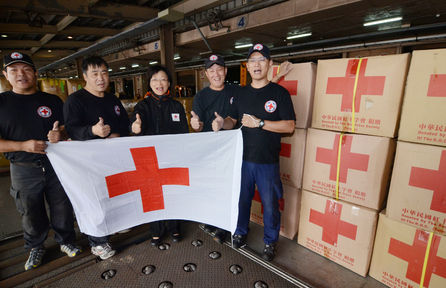 Removal of Act is not removal of RC: Cabinet

As lawmakers are taking actions to abolish a law which governs the operations of the Taiwan Red Cross, Cabinet spokesperson Tung Chen-yuan said Tuesday that the actions do not aim to do away with the country’s Red Cross.

The consensus to abolish the Red Cross Society Act was reached on Monday in a meeting between the new government’s executive and legislative bodies.

The meeting participants agreed that while it is necessary to keep the Taiwan Red Cross, the special law governing the operations of the organization should be abolished in the future so that it can become a civil organization and be regulated under the Civil Organizations Act just like other civil organizations in the country.

Tung said the Taiwan society has many suspicions regarding operations of the Taiwan Red Cross, including utilization of donations and the unlimited terms of the organization's president.

The Cabinet agrees with the Legislature on removal of the special law to detach government connection from the Red Cross and make it more transparent and functional, Tung said.

As required by the Act, currently Taiwan Red Cross' management consists of government-assigned members as directors and supervisors.

Taiwan Red Cross voiced its opposition in a news release on Tuesday, saying that it agreed that some outdated provisions of the law should be amended, but the law itself should not be revoked. Abolishment of the Red Cross Society Act will result in disbanding of the organization, which is by no means good for the country’s well-being, the release read.

At the Legislature, the pro-abolishment ruling Democratic Progressive Party (DPP) on Tuesday failed to reach any conclusion in a negotiation with the anti-abolishment opposition Kuomintang (KMT).