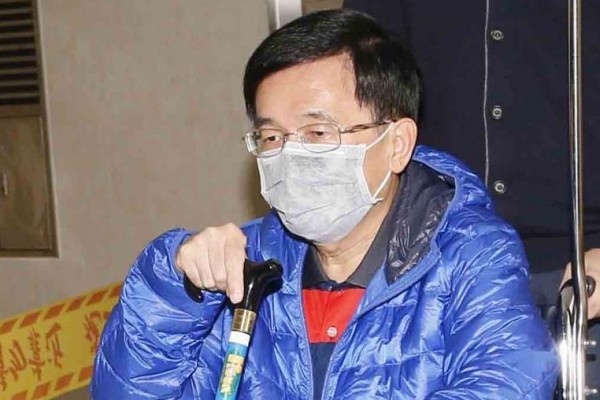 TAIPEI (Taiwan News) – Former President Chen Shui-bian’s intent to attend a thanksgiving dinner on June 4 could lead to the cancellation of his medical parole, reports said Tuesday.
The former head of state was sentenced to 20 years in prison on corruption charges, but early last year he was allowed to live with his family in Kaohsiung on medical parole.
Just before the May 20 inauguration of President Tsai Ing-wen, it became known that Chen would have liked to have been present at the inaugural banquet, but the news provoked controversy and he scrapped his plans.
At the same time, it became known that he might appear at a dinner in Taipei organized by the Ketagalan Foundation, which was founded 11 years ago during his presidency. A spokeswoman for his medical team announced Tuesday that he would present at the event scheduled for June 4, and that Taipei City Mayor Ko Wen-je, an early supporter of his medical parole, would also attend.
Chen would travel to the event in the capital’s Dazhi neighborhood by high-speed train in the company of at least a doctor, a foreign maid and a former bodyguard, reports said.
He was expected to appear on stage and pronounce a few words of gratitude, a medical team spokeswoman said. In addition to Ko, Tainan City Mayor William Lai, Taoyuan City Mayor Cheng Wen-tsang and Kaohsiung City Mayor Chen Chu were also highly likely to attend the event, reports said.
The medical team was reportedly not going to apply for permission from the judicial authorities for Chen’s trip.
However, the Taichung Prison, where the former president stayed before his medical parole took effect, said that if his trip to Taipei had nothing to do with medical care, his parole might be canceled.