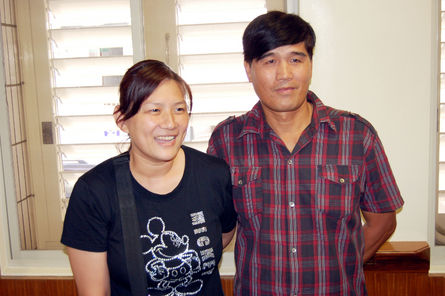 Ku Chin-shui, Taiwanese decathlon silver medalist of the 1990 Asian Games, is still battling cancer after he was rumored by the media to have died of leukemia on Saturday, former Olympian medalist Chi Cheng said in a letter published on Sunday.

However, Chi, Hope Foundation Chairwoman, said that it can be foreseen his life is coming to an end.

When Ku was diagnosed with leukemia at the end of 2014, Chi visited him at the hospital and helped him transfer to another hospital for further treatment. Since then, Chi has paid much attention to Ku’s conditions and pleaded with the public to pray for his recovery.

After his incredible feats in the realm of track and field athletics, Ku was projected into the media spotlight again after a Uni Air flight on-board explosion incident in 1999 that implicated him and made his life miserable thereafter, Chi said in her letter.

Ku was prosecuted for allegedly masterminding the explosion.

The incident cost Ku his job and financial stability and made him and his family go through countless ordeals, Chi’s letter read. Ku went through 12 years of litigation, five retrials and five not guilty verdicts to clear his name, Chi wrote. “At that time, we all thought Ku could finally face the society and live his own life.”

However, the ordeals for Ku and his family did not end there, as Ku was diagnosed with leukemia in 2014, the letter read.

After a bone mallow transplant at the National Taiwan University Hospital (NTUH), Ku’s conditions got so well and stable for a time that he even went back to work, and on January 1 of this year he participated in a pubic walking activity and thanked the public for their concern.

Ku, 56, is a physical education teacher at a high school in Taichung City.

Ku came down with pneumonia in April and was hospitalized at the NTUH again, the letter said. “I think, this time Ku won’t be able to walk out of the hospital to express his thanks, but the NTUH team said his will to live had been extraordinary….I knew he had been trying very hard.”

“Ku, who I treated as my biological brother, is going to finish the work that God had given to him,” Chi said.

Chi said her emotions were getting complicated as time ticked away and that on behalf of Ku and his family she thanked those who had given Ku help during his life journey.