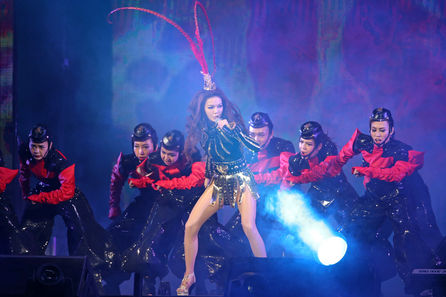 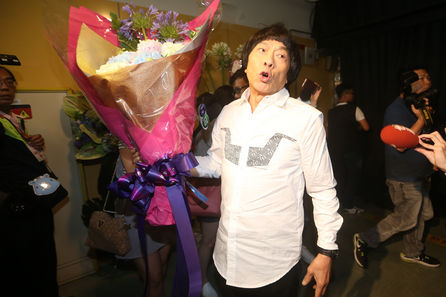 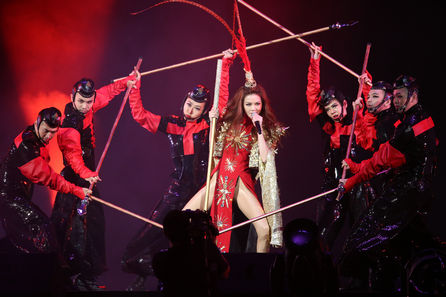 Jeannie Hsieh, Taiwanese singer and dancer known for writing and performing music which combines techno and hip-hop, revealed in a letter why she had repeatedly and coldly refused to meet with her father, Chu Ke-liang, birth name Hsieh Hsin-ta, the famous Taiwanese actor, comedian and television show host.

The letter was broadcast in a video during her concert at Taipei Arena on Saturday night. In the letter, Jeannie said her father made her mother accept a request to bring his mistress to live under the same roof. Jeannie said it was the most humiliating past in her mother’s life.

Chu said publicly before the concert on Saturday that he would attend Jeannie’s concert. But his daughter said she didn't want him to come or see him. However, Chu had 22 flower baskets sent to the venue and showed up at the concert. Chu stayed for nearly two hours; but with no chances of seeing his daughter personally, he left before the concert ended, commenting on his own life as a failure.

Jeannie announced during Saturday’s concert that the Taipei Arena concert was her last performance there and that she would take a break after the Kaohsiung concert on June 4. She also said she would not perform at any 2017 countdown concerts.

Jeannie’s agent was quoted by media as saying that Jeannie cried backstage just before the concert opened because her mother, who also attended the concert, has not been feeling well and that Jeannie wants to spend more time with her mother. Jeannie last performed at Taipei Arena four years ago.

In the long letter, Jeannie first said the most important woman in her life is her mother and then apologized for "the ugly and boring news about her family matters" being repeatedly reported.

Jeannie said it was a struggle to her to say something against her father because she loved him and would not want him to get hurt, but if she kept silent, it would not be fair to her mother, who Jeannie said has always kept everything to herself, never fought for herself and never complained.

Jeannie said her mother, as a wife, had made repeated compromises and taken verbal and physical violence throughout the marriage with her father just to give her elder sister and her a complete home.

Then Jeannie went on to say the most embarrassing past in her mother’s life was when her father made her mother accept his request to bring a mistress to live with them and the life thereafter. Jeannie said her mother accepted the request also as a compromise after her father promised to take care of the family.

Jeannie said, however, her father’s promise did not last long, and her mother, her sister and she were finally abandoned and had to move to the home of her mother’s parents as a “harbor of refuge.”

In the letter, Jeannie went on to describe how hard her mother, as a single mother, had to work to support the abandoned family, how her sister and she survived a serious traffic accident, and how their life was badly affected by his father’s heavy debts, some of which were incurred in her sister’s name.

She said the traffic accident brought her long-lost father back, who took her sister to live with him to make up for the lost family ties. "Mom agreed that we should have paternal love, and for a short period of a few months, my sister and I were so happy because we got our father's love and care back! My father was going to remarry and hoped my sister and me can be bridesmaids, and mom, giving my father her best wishes, encouraged us to support him," Jeannie said.

"But the promise didn't last long either as my sister was awakened one day by gun shots to find she was left alone in the empty house. So mom took my sister back," Jeannie said. After that they had to face an influx of receipts for loans, creditors, and court summons for the debts her father owed, she added.

Jeannie said that for so many years, her mother has not voiced her opinion on their family matters, but it doesn’t mean the one who kept silent was wrong and the one who spoke out was right.